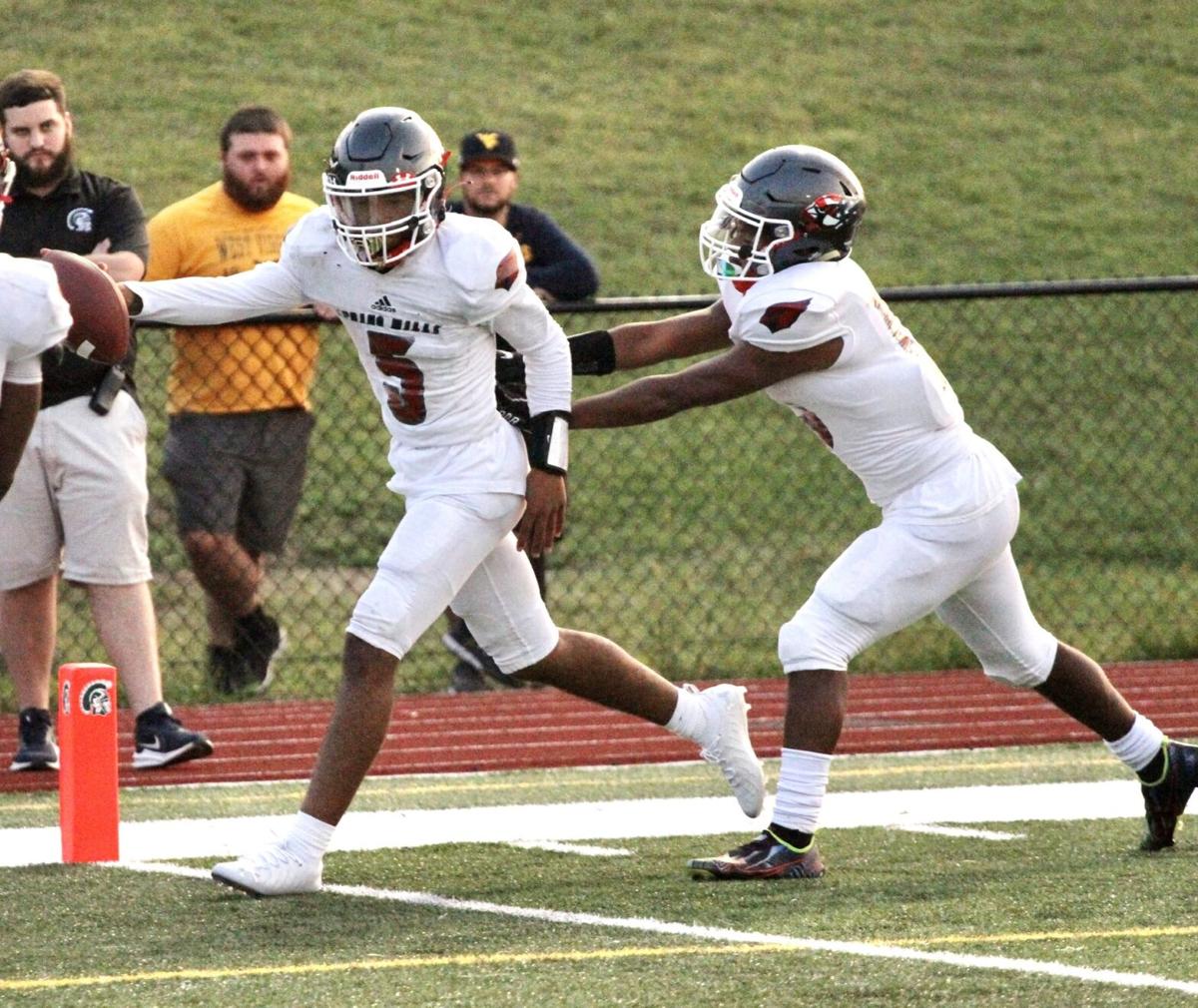 Josiah Brown reaches the ball across the goal line to score his 1st touchdown of the game. Brown scored 4 rushing touchdowns and added another through the air.

SUNRISE SUMMIT – The game plan for Hampshire was going according to script to start the game.

Hampshire received the opening kickoff and put together an impressive 18-play drive that lasted 6 minutes and 27 seconds, covering 68 yards, with 4 first downs.

On 3rd and goal from the 2-yard line, QB Alex Hott capped off the drive with a rushing touchdown to give Hampshire an early advantage.

Cody Vandevander tacked on the extra point to make it 7-0 Trojans.

“We came out and executed,” said offensive coordinator Drew Taylor.

“We saw their 4-2 box and knew we could isolate their inside backers and run right at them and attack the flats in the passing game.”

Time of possession was paramount for the Trojans to have a chance of knocking off Spring Mills, and halfway through the 1st quarter, things looked bright for Coach Rule and his Trojans.

“Our 1st possession was one of the best possessions I’ve been a part of,” said Coach Rule.

“We sustained an 18-play drive and scored when we had every opportunity to score quicker, but our kids did a phenomenal job.”

Unfortunately, the Trojan offense stalled on the following possession after a penalty made it 4th and 11 from the Spring Mills 34-yard line and the play resulted in an incomplete pass and turnover on downs.

“Execution on the following drives and the remainder of the game was not as crisp and we had little mistakes that really cost us from moving the ball as well as we did that 1st possession,” explained Rule.

From that point forward, Spring Mills captured the momentum and never looked back.

Cardinal QB Josiah Brown had a monster game, rushing 204-yards on 21 carries, scoring 4 rushing touchdowns. Brown was lethal in the air as well going 10-for-13 for 163-yards and 1 touchdown.

Brown’s speed in the open field helped him tally 5 touchdowns in total as the Cardinals went on to beat Hampshire 51-7.

As a team, the Cardinals finished with 564-yards of total offense, with 396 rushing yards and 168 passing yards.

“Defensively, I’m still trying to wrap my brain around why we can be so physical up front and at the point of contact with a team like Frankfort, who compacts their offense, versus Springs Mills who basically is running the same type of plays as us,” said Rule.

“As a head coach, I need to do a better job of understanding this and get more out of our players.”

Alex Hott and Stephen Leonard both finished with 20-yards rushing to lead the Trojans.

Hott went 9-for-18 throwing for 54 yards and 1 interception.

Ashton Haslacker pulled down 6 catches for a total of 48-yards.

Haslacker led the team with 6 tackles on defense while Hott finished with 5.

Zander Robinson had another solid performance highlighted by 5.5 tackles and a blocked extra point.

Other contributors on defense included Grant Hicks with 5 tackles, Alex Pritts had 4.5, Brennen Brinker 4, while Nathan Sions and Caleb Vandevander finished with 3.5 tackles each.

The Trojans are now 1-2 on the season and look to get back on track with a road game at Park View H.S. in Sterling, Va.

“We have went back to the drawing board and changed up our practice schedules this week to try and get more team O and team D in,” Rule said on how his team is getting ready for the unfamiliar opponent.

“Last year, our kids did a great job of responding to teams we hadn’t had on the schedule in a long time. We will treat Park View just like any other opponent and make sure our kids keep level heads no matter what adversity we face on the trip as well as on the field versus Park View.”