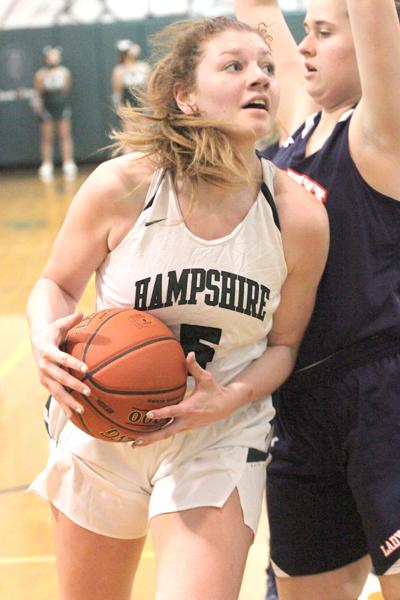 Senior Jadyn Judy suffered a gruesome eye injury in the 1st quarter that knocked her out of the game and the Trojans had a choice to make in the locker room.

Let the loss of a senior starter hamper their play, or rally together and come out firing in the 2nd half.  The Trojans chose the later.

“We obviously hate losing one of our senior starters, but I think it fueled the girls,” said head coach Julieanne Buckley.

“We wanted to get the win for Jadyn.”

They wanted the win and they got the win.

Hampshire poured in 40 points in the 2nd half and held Spring Mills to just 24 to capture the win 68-54 and improve to 7-4 on the season.

“Saturday was really simple,” said Buckley. “We made some mistakes, yes. But we were able to do a lot of little things right. The girls really handled the pressure well and everyone contributed.”

The Trojans were led by senior shooting star Gracie Fields who knocked down 6 field goals, 5 free throws and a pair of 3’s for a total of 23 points to lead all scorers.

Hannah Ault was a force in the 4th quarter scoring all 13 points in the final 8 minutes of play.

Ellen Keaton grinded in the low post throughout the game, notching a point in each quarter for a total of 13.

Liz Pryor had another dominant game in the paint scoring 8 points while freshman Izzy Blomquist found her scoring touch with 7 points. Lainee Selan rounded out the scoring with 4 points.

“These girls were robbed of a preseason together,” said Buckley.

“That is a lot of missed basketball opportunities for us. I think when we are in sync we are a really good team with tremendous talent. We just have to hope that we continue to do that as well as stay healthy.”

The Parkersburg South girls hopped on a bus and traveled over 4 hours to play Hampshire on Thursday. The  Patriots established the pace of play early on and shot the ball well, hitting a total of 23 field goals with 7 of those 3’s, to capture victory 62-27.

The Patriots were led by Skylar Bosley with 15 points, Aubree White with 14 and Hannah Wingrove finished with 9.

Ellen Keaton was the top scorer for Hampshire with 10 points, grabbing 2 rebounds and 2 steals. Jadyn Judy scored 6 points with 2 steals while Lyz Pryor finished with 5.

“We are hopeful our strength of schedule will only help us down the road,” said Buckley.

Hampshire dropped to 6-4 on the season.

A heartbreaking loss for the Trojans in Mineral County last week as Keyser’s Alexa Shoemaker hit a 3 at the buzzer to win the game and split the season series.

Although the buzzer beater sent the Golden Tornado into the victory column, it wasn’t the only reason the Trojans suffered a tough road loss.

“It was all the little mistakes before that,” coach Buckley pointed out.

“We shouldn’t have been in that situation to begin with. We were up and just had to knock down our free throws. Once we got the 10-second call, which led to a turnover, we lost momentum. Maybe that was something we needed to experience, needed to grow through, so that we can prevent it from happening again.”

Gracie Fields led the Trojans with 14 points, while Ellen Keaton had 7 and Jadyn Judy scored 6.

Alexa Shoemaker was the top scorer for the Golden Tornado with 13 points while Kaili Crowl wound up with 11.

Hampshire’s record dropped to 6-3 on the season after the road loss.