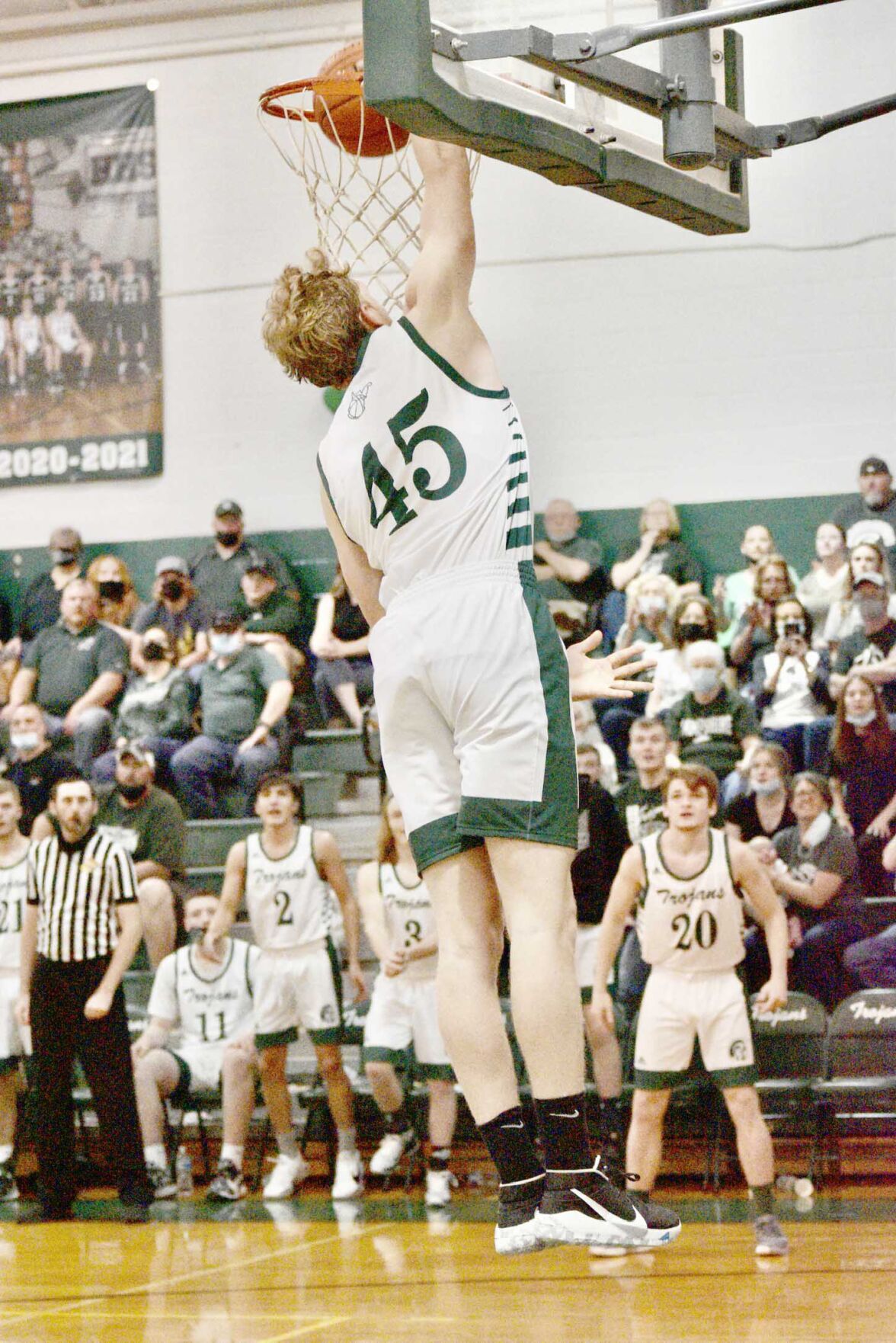 Christian Hicks throws down a dunk. 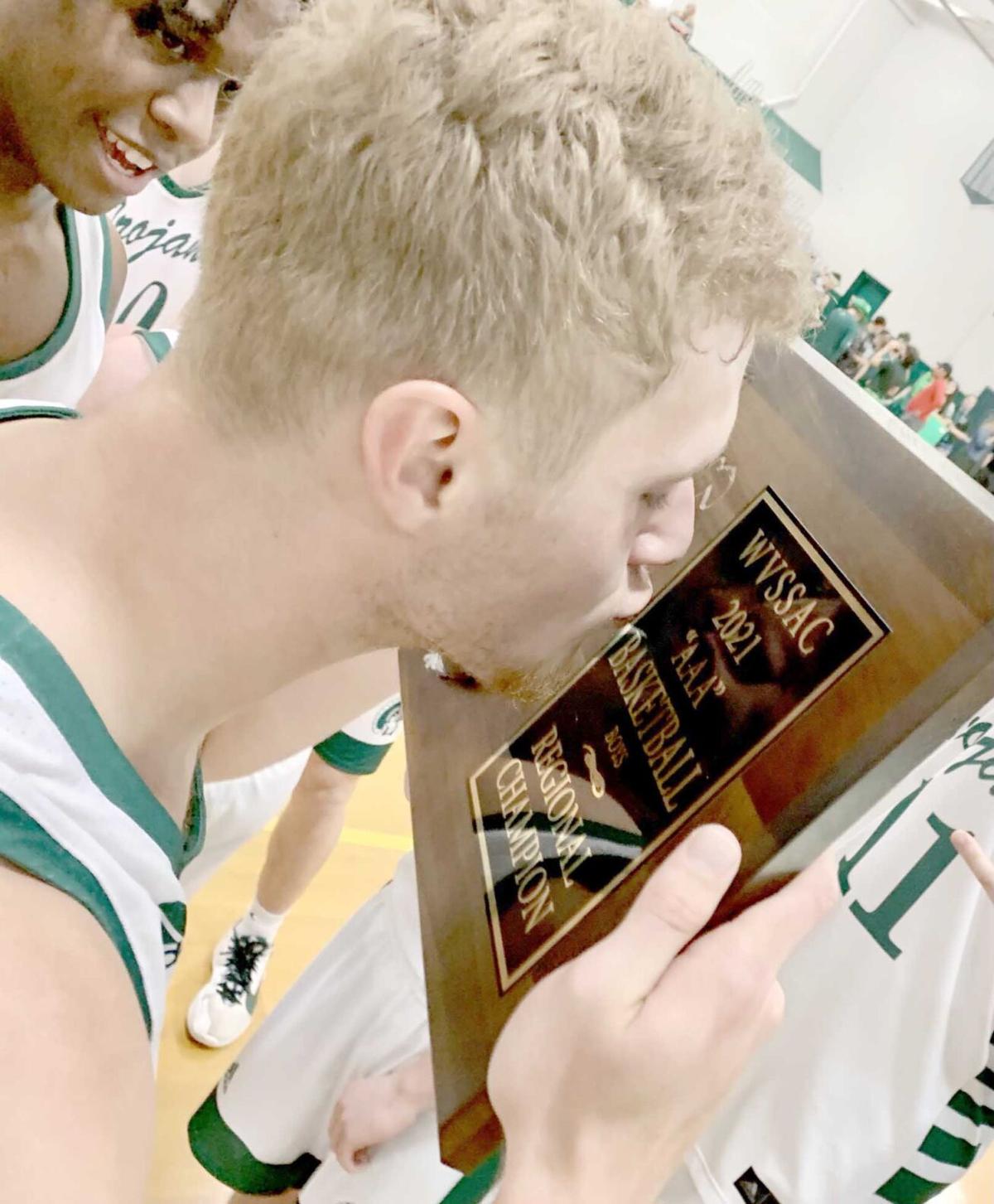 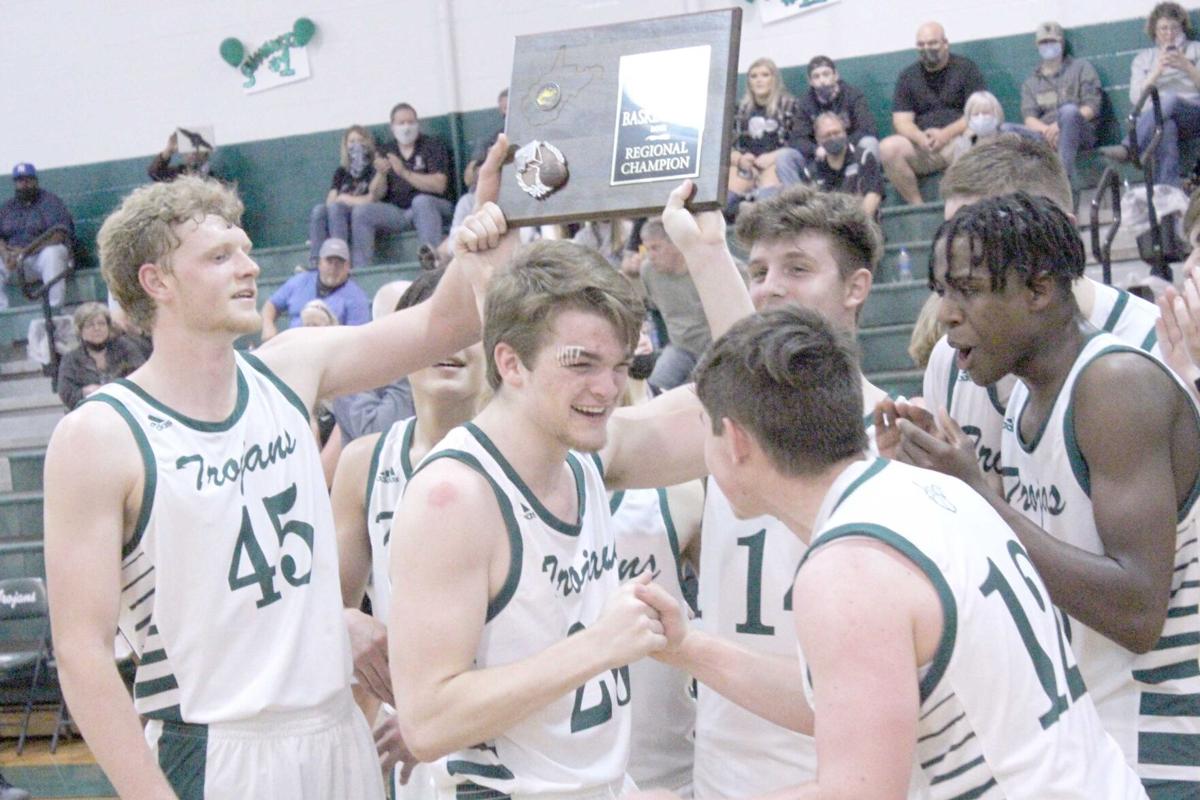 Christian Hicks throws down a dunk.

For the 1st time in Hampshire history, the Trojans punch their ticket to the Civic Center defeating North Marion 52-41 in the Region 1 championship.

SUNRISE SUMMIT – After 56 years of Hampshire basketball, the Trojans have earned a berth into states.

“I don’t even know man,” said coach Danny Alkire trying to find the right words to express his feeling of jubilation.

“It’s just so satisfying because of these kids.”

“This group was my first group when they were sophomores.  Just to be around those kids and see them grow, from a basketball standpoint and as people. Just knowing how we went through games that haven’t been so great then getting to see their growth.”

Hampshire’s victory over North Marion last Tuesday night might arguably be the biggest in program history. The Trojans were 0-13 in regional play, but Coach Alkire reversed the curse, threw the monkey off Hampshire’s back and led his senior heavy squad to the Civic Center.

“Any coach would be happy to be a part of a team that was successful like this.”

As for the game against North Marion, the Trojans started off hot thanks to the grasshopper, Christian Hicks. Hicks had the hot hand from the onset scoring Hampshire’s first 7 points of the game to give HHS a 7-2 early advantage.

The Huskies fought back with a 10-2 run to end the 1st quarter and the scoreboard read, 12-9, in favor of the visitors.

The lead didn’t last long for North Marion as Zack Hill and Drew Keckley poured in back-to-back buckets within the 1st minute of the 2nd quarter. After Keckley’s bucket early in the 2nd quarter, Hampshire never let the Huskies regain the lead.  The Trojan defense was up to the task in the 2nd quarter holding North Marion to just 4 points to take a 4 point lead into the lockers, 20-16.

After intermission the game became physical, just the way Hampshire likes it.

A flurry of baskets and fantastic defensive plays came from a variety of players like Trevor Sardo, Damon Steinmetz, Mikhi Anderson, Alex Hott and Carter Smith.

The game was symbolically over when the grasshopper, Christian Hicks, threw down a dunk late in the 4th quarter to send the fans into a frenzy.

“It was just a huge emotional boost,” said Hicks about the symbolic dunk to send Hampshire to states.

“I knew when it went through we would be on our way to states.”

Hicks has had saved his best games for the postseason and the regional championship was no different on Tuesday night.

The senior led the Trojans with 13 points and was a physical beast in the paint preventing any North Marion penetration near the basket.

“I was blessed to be calm that game,” explained Hicks.

“I just treated it like another game, even though it was a huge regional matchup.”

Senior teammate Trevor Sardo also had an outstanding performance scoring 13 points for the Trojans. “Smooth” Drew Keckley tossed in 10 points while the spark plug Carter Smith and Damon Steinmetz both finished with 6 points. Zack Hill did dirty work defensively all game and finished with 2 points while Mikhi Anderson flexed his defensive muscle and tossed in 2 points as well.

The Trojans believed in the culture change 3 years ago, and the reward for their beliefs is a trip to Charleston.

Shortly after winning the regional championship, Hampshire landed the No. 8 seed in the playoff bracket, drawing No. 1 seed Robert C. Byrd. The Eagles (14-1) lone loss came against AAAA powerhouse Morgantown High 56-44, however RCB split the season series with the Mohigans with a win in Morgantown 69-56.

“We are going to make it tough for him,” commented coach Alkire.

“Most teams you have that one stud and you just try to shut him down. With RCB, they have 4 other kids that are very good basketball players.”

Those other players include senior Gavin Kennedy who can light up the board scoring 16.7 ppg while junior Jeremiah King fills the nets averaging 12.5 ppg.

Alkire knows his team will have their hands full with this talented RCB squad but is confident his kids will compete.

“We are going to be physical, and maybe show them a little bit different scheme, but we are ready to man up and go toe-the-toe with them.”

You can watch Hampshire at the Civic Center on the NFHS network, starting with the tipoff on Wednesday night at 5:30 p.m.