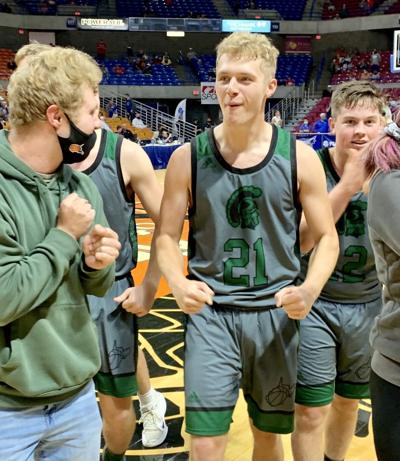 CHARLESTON – The Trojan chariot to Charleston arrived at the Civic Center for the first time in school history on Wednesday evening and Cinderella extended her stay, knocking off No. 1 seeded Robert C. Byrd 53-47.

Hampshire senior Drew Keckley put the fortunes of the Trojans on his back and played his best game of the season scoring 25 points on 9-of-14 shooting, with a pair of 3’s and a perfect 5-for-5 from the charity stripe.

“I’m not one to sit here and talk about myself,” Keckley said. “It all came from my teammates. They picked me up in the first half when we were down and needed points. In the second half, I found opportunities and took what I could get.”

One of those senior teammates that stepped up was Mikhi Anderson, who finished 1 point shy of a double-double, scoring 9 points and grabbing a game-high 12 rebounds.

“On defense, we know we can trust each other,” explained Anderson.

Mikhi and his senior teammate Christian Hicks were warriors in the paint helping HHS outrebound the taller RCB squad 34-28.

The stingy Trojan defense held the Eagles to just 47 points, 18 points below their season average, thanks to their aggressive press and physical play.

Hampshire senior Trevor Sardo set the tone physically early in the contest and punished the Eagles repeatedly on both ends of the court scoring 12 points, with 3 assists and 3 steals.

“We have a lot of role players that help us in a lot of different ways,” said Sardo.

It was the 1st time in state playoff history a No. 8 seed beat a No. 1 seed, (previously 0-45), but seedings never mattered much to head coach Danny Alkire.

“All of those seedings come from other coaches and they don’t know Hampshire High. We know who we are,” said Alkire.

The Trojans outscored RCB 21-11 in the 4th quarter holding the Eagles scoreless for over a 5-minute span. Drew Keckley knocked down a pair of free throws with 5:15 left in the game and the Trojans never looked back.

“My hats off to Hampshire.”

The Trojans shot 45.2% from the field and won the battle in the paint out-dueling the lengthier Eagles 26-22.

Hampshire also outperformed RCB from the free throw line hitting 12-of-15 shots while the Eagles only hit 33% from the stripe on 15 attempts.

“I feel like I let my team down tonight. We did a lot of uncharacteristic things. Maybe it was nerves, but I didn’t think that would be the case,” said Bennett.

I have never followed high school sports until I moved to this great state and was lucky to land in Hampshire County. What outstanding young men on this team and I don't mean just their athletic ability. And what can you say about Mr. Carroll's writing except there will be no Bronx cheer about his this Ruthian blast and more the same on deck and in the hole.