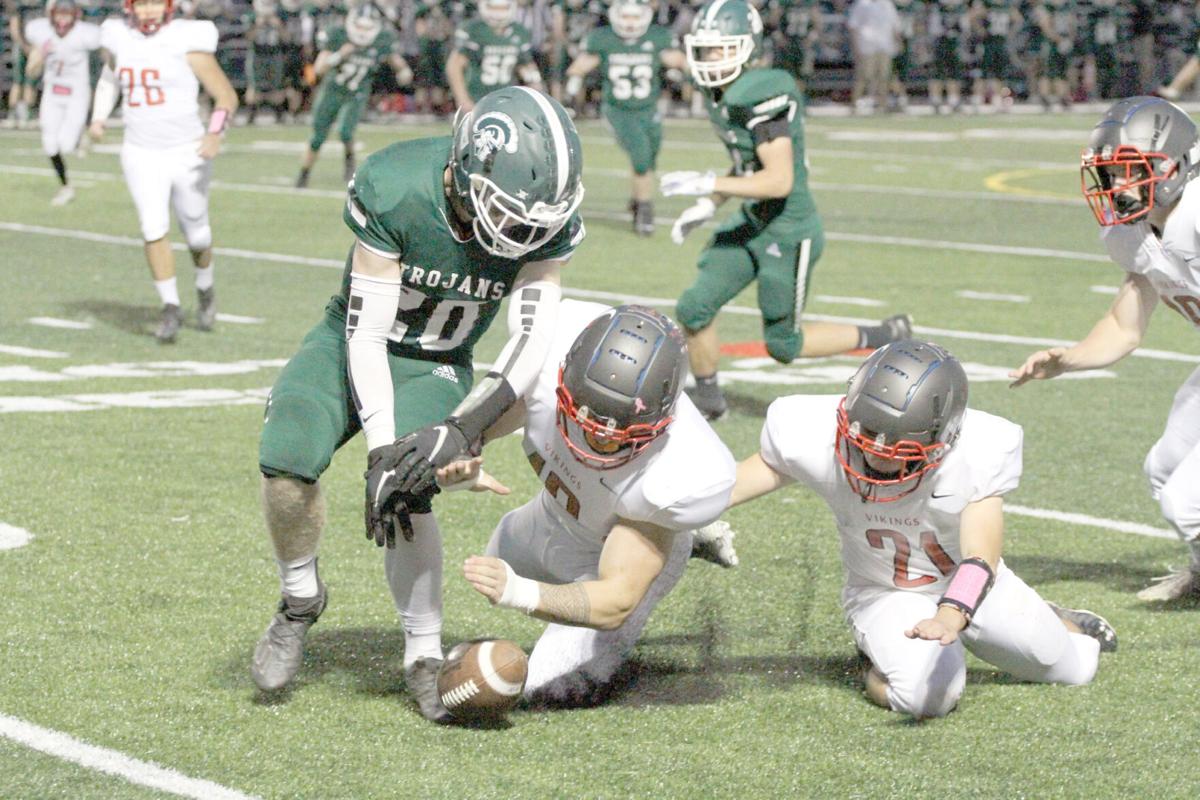 Hampshire’s Ashton Haslacker fights with a pair of Vikings to recover a kick. 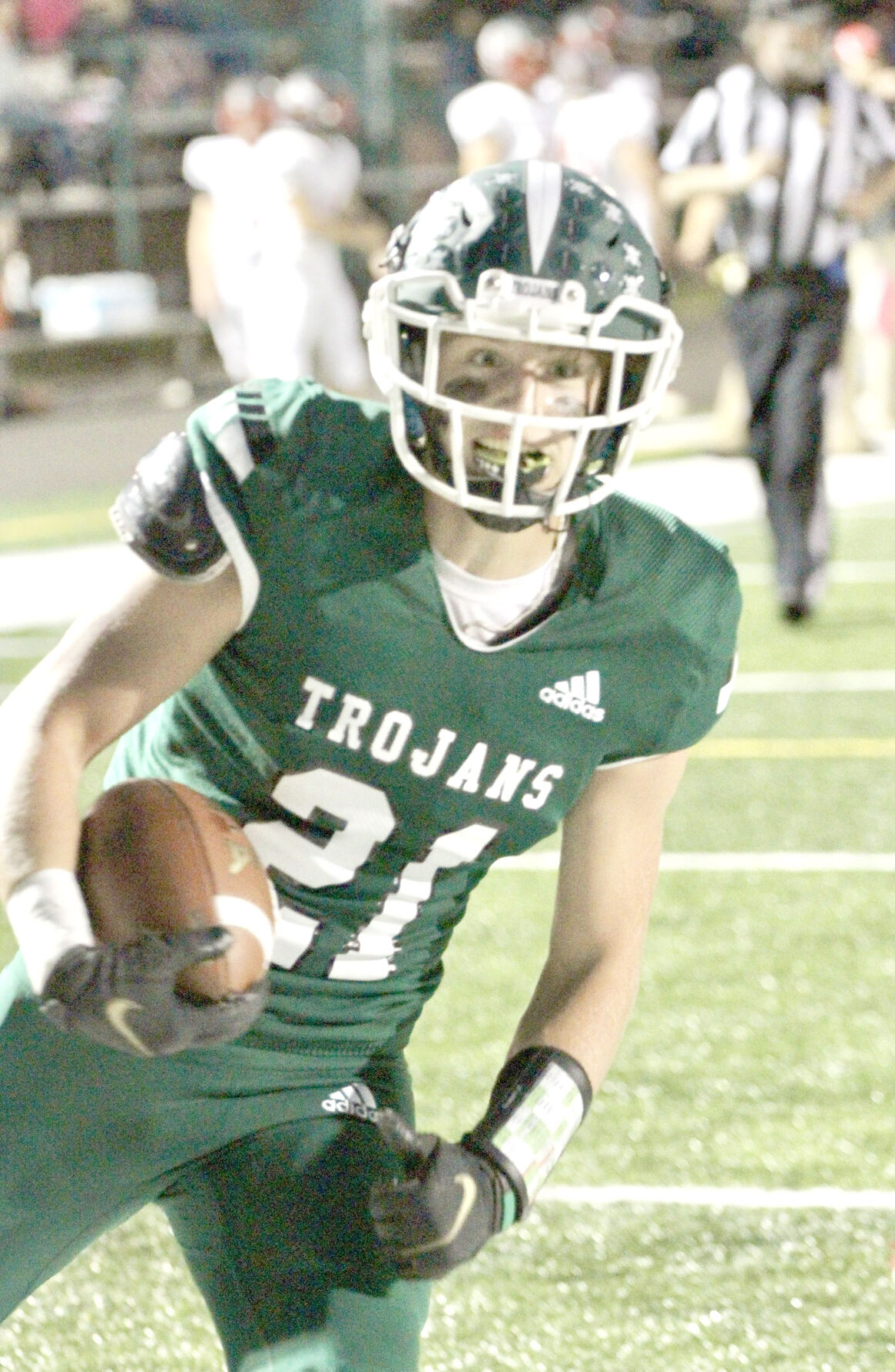 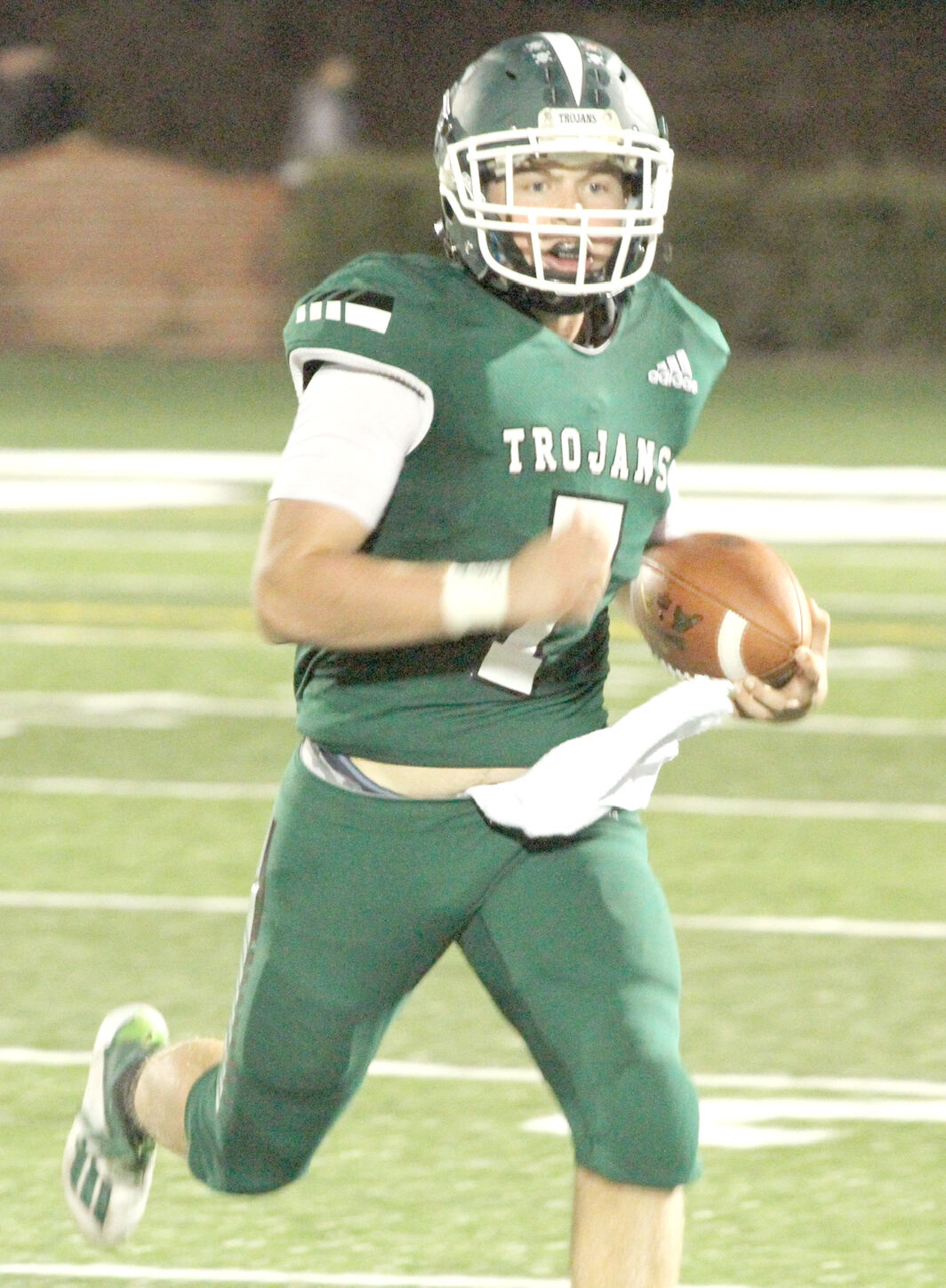 Alex Hott finds an open lane and scrambles for a 1st down.

Hampshire’s Ashton Haslacker fights with a pair of Vikings to recover a kick.

Alex Hott finds an open lane and scrambles for a 1st down.

SUNRISE SUMMIT – With the score 26-19 in favor of Petersburg in the 4th quarter, the game was still undecided as Hampshire possessed the ball deep in their own zone. With the clock working against them, Hampshire was forced to go for it on 4th down, but the Vikings were not fooled.

Trojan QB Alex Hott had been sidelined for several series trying to shake off an injury, as backup QB Easton Shanholtz was attempting to lead the Trojan comeback. On 4th and 10 the ball was on the Hampshire 30-yard line, when Coach Aaron Rule inserted Hott back into the lineup.

Petersburg’s senior LB McCoy Fitzwater noticed Hott in the backfield and after Hott received the snap, he juked an oncoming tackler, then tossed the ball into the air, which was picked off by Fitzwater, who galloped 30-yards into the endzone to give Petersburg a 32-19 lead with just a few minutes remaining in the game.

“McCoy had that pick 6 because that’s how we practice to go after the ball and challenge every pass.”

Although Petersburg and Hampshire scored another touchdown in the waning moments of the game for the final result of 39-25, the game was sealed with the pick 6.

The win was extra special for Petersburg’s 1st year Head Coach Donny Evans, as he spent years coaching football here in Hampshire County as the head coach at Romney Middle School and as an assistant with Hampshire High.

“I had this game circled since the time I got hired and I had these guys fired up this week. Also I was excited to see the Hampshire players that I used to coach and how they have grown up and developed as well. They did a great job over there and they played their hearts out.”

Friday night was Homecoming for Hampshire and the game started off in favor of the home team, as they jumped out to an early 11-0 lead.

Trojan QB Alex Hott went 7-for-7 to start the night hitting senior WR Trevor Sardo on a 30-yard slant for a touchdown and Christian Hicks booted a 28-yard field goal to give the Green and White a 2 possession lead.

Rule continued, “The boys made plays when they had to and we were completing short balls and intermediate balls in the pass game keeping their defense off balance.”

Although the Trojans were able to grab an early 2 possession lead, the defense was unable to slow down the Viking offense the next 3 stanzas as Petersburg posted 39 points compared to Hampshire’s 14.

The Petersburg offense was led by Montana Sindledecker, who rushed for 136 yards on 13 carries scoring 2 touchdowns. Viking QB Cody Nuzum passed for 2 touchdowns and racked up 76 yards on the ground and added a rushing touchdown of his own.

“Discipline and being in the right spots,” answered Rule as to why the Trojans struggled stopping the rushing attack.

On the other side of the ball, Hampshire couldn’t find any rhythm running the rock amassing 13 total yards on 30 carries.

“After the 1st quarter, our D-line did a good job of getting to the quarterback and getting in the backfield,” said Coach Evans.

The Vikings tallied 7 sacks as Wyatt Arbaugh made his presence felt accounting for 4 of them. Alex Hott finished the game with 19 completions on 29 attempts for 217 yards and 2 passing touchdowns.

Ashton Haslacker led the Trojans with 89 yards receiving on 4 catches scoring 1 touchdown, while Trevor Sardo finished with 84 yards on 11 catches with 1 touchdown.

For the 1st time in the history of the rivalry, which started in 1964, Petersburg has won 3 straight games over Hampshire.

The win improves Petersburg’s overall record to (4-1) as they hit the road to play Frankfort in Short Gap this Friday.

Hampshire (2-4) will look to bounce back against Berkeley Springs (1-4) at home on Friday night.

Berkeley Springs has given up 44 points per game, therefore the matchup with Hampshire’s offense is favorable for the Trojans. But the key to the game will be on the defensive side of the football according to Coach Rule.

“Physicality,” Rule confirmed as the key to the game.

“Dominate the line of scrimmage on both sides of the ball and contain their QB. They make big plays when he eludes the pass rush and gets in the open field. We also have to be disciplined with our eyes and our technique in tackling and in the defensive backfield with their deep balls.” o