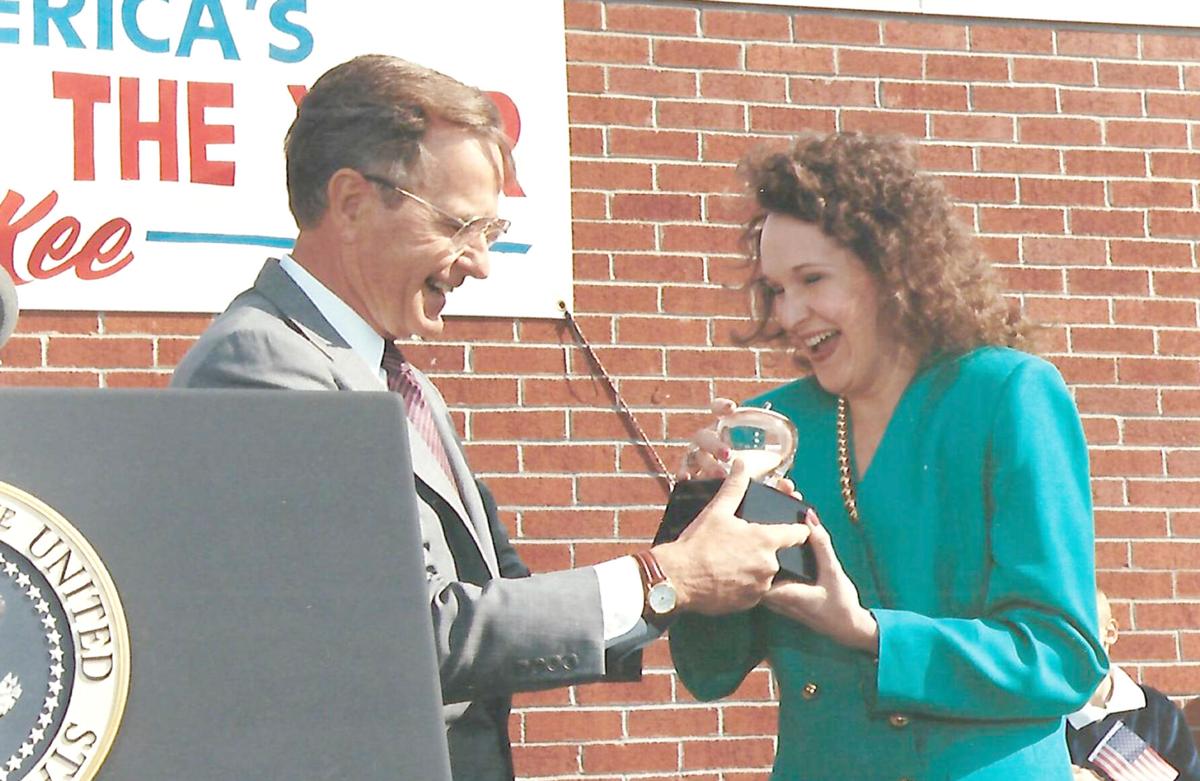 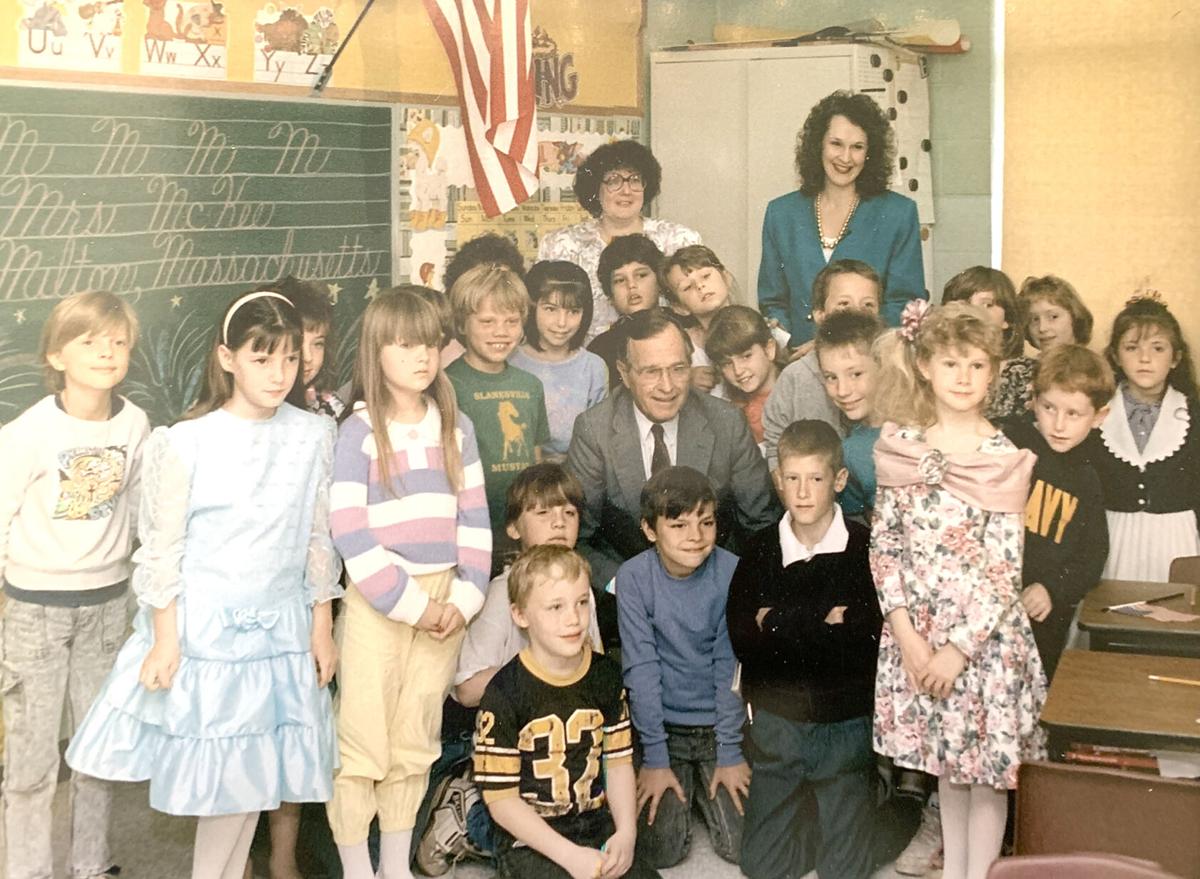 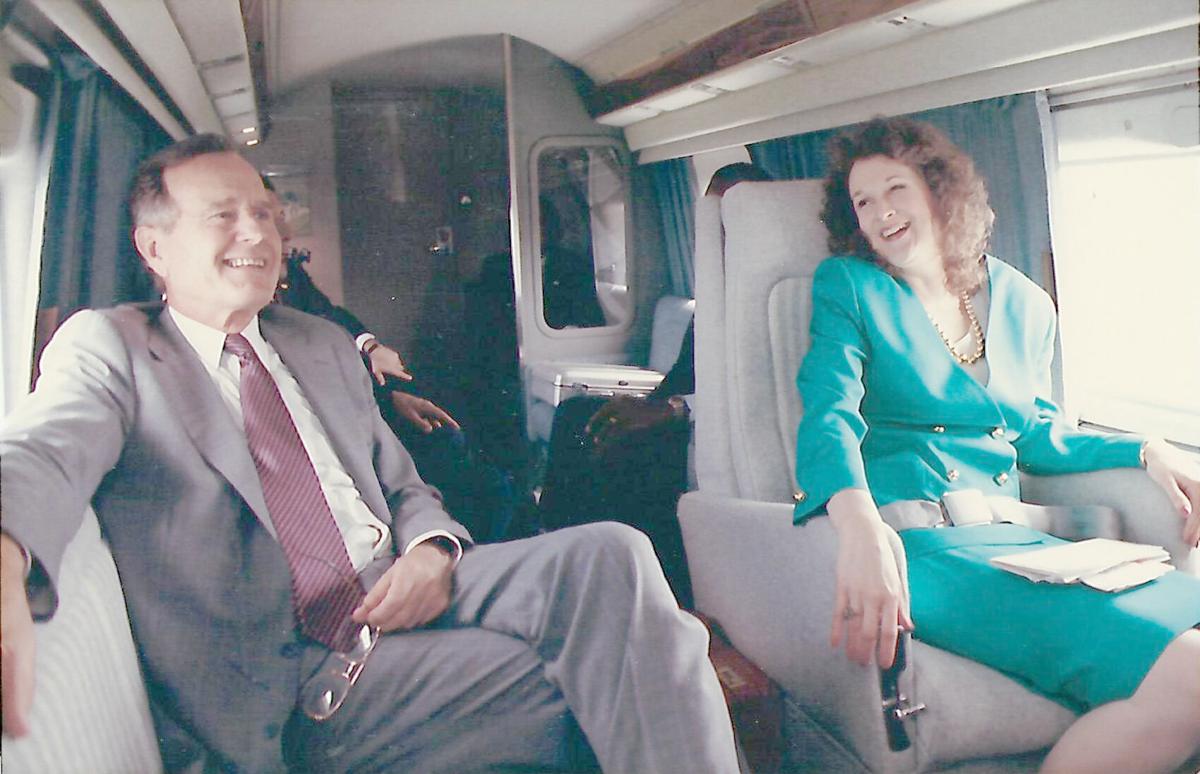 Rae Ellen McKee and the president share a laugh aboard Marine One. 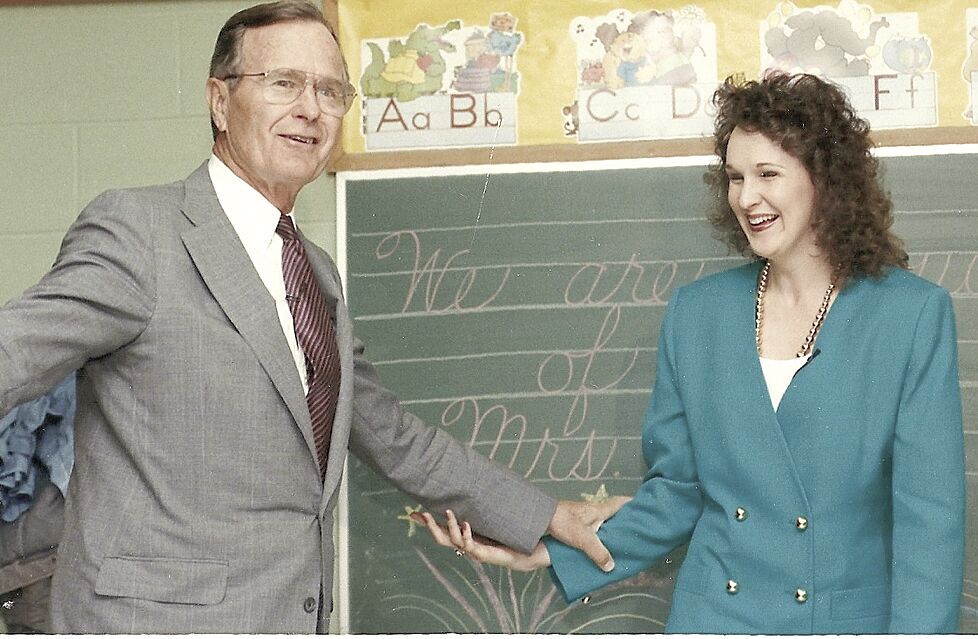 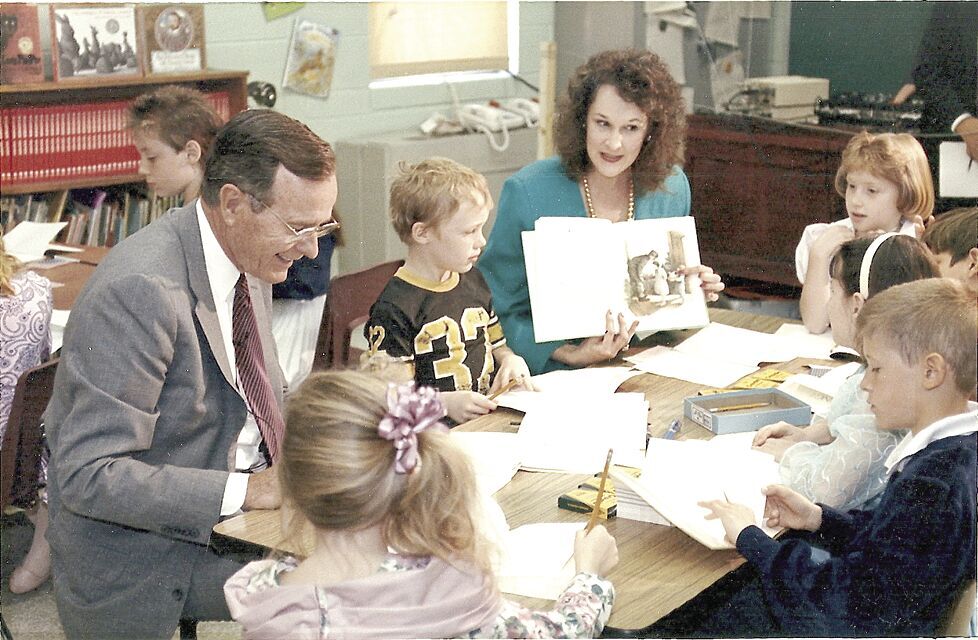 The president participated in Rae Ellen McKee’s reading lesson, centered on Cynthia Rylant’s book, “When I Was Young in the Mountains.” 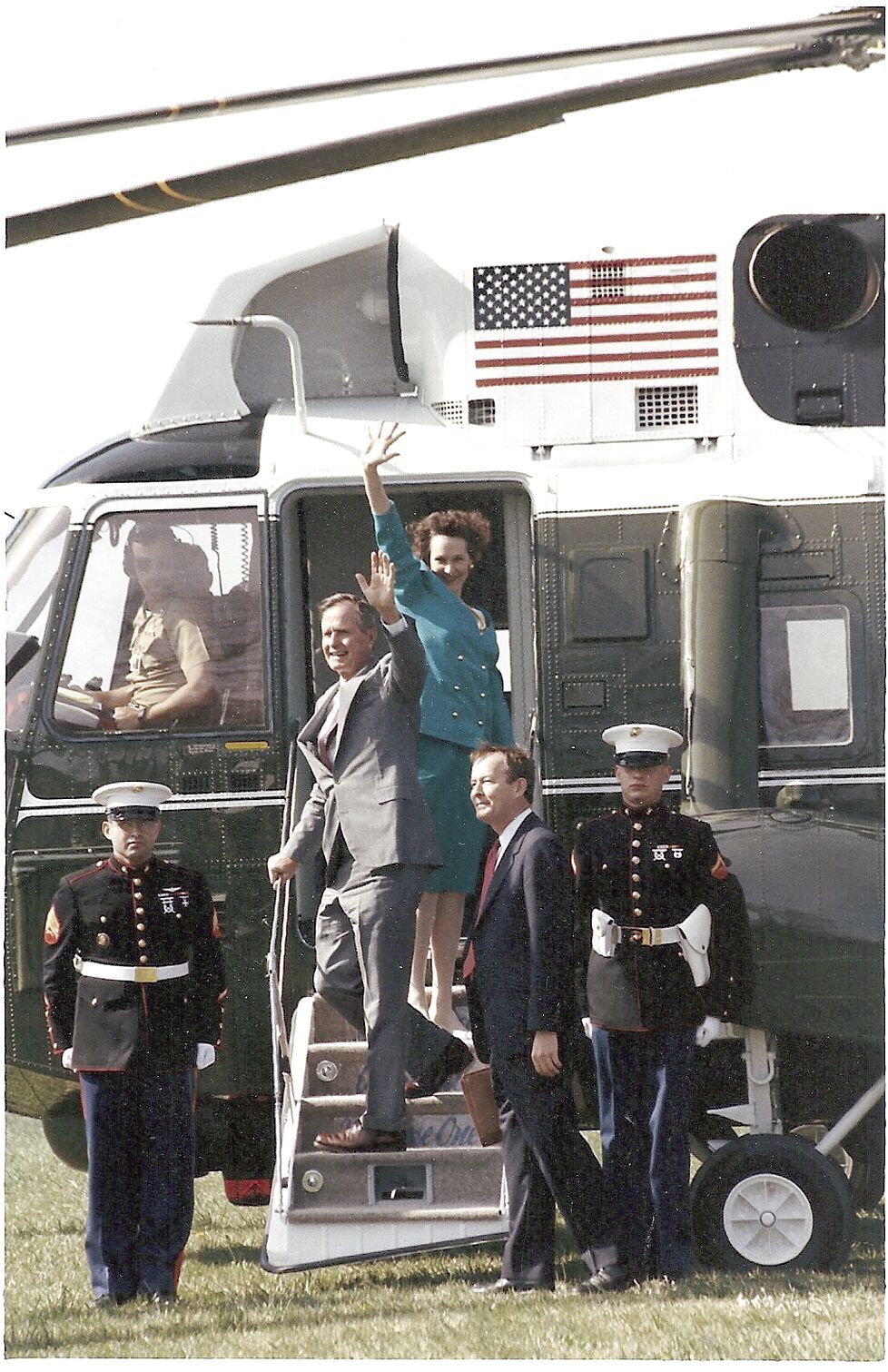 Rae Ellen McKee and President Bush wave goodbye to the many onlookers on the Slanesville property. 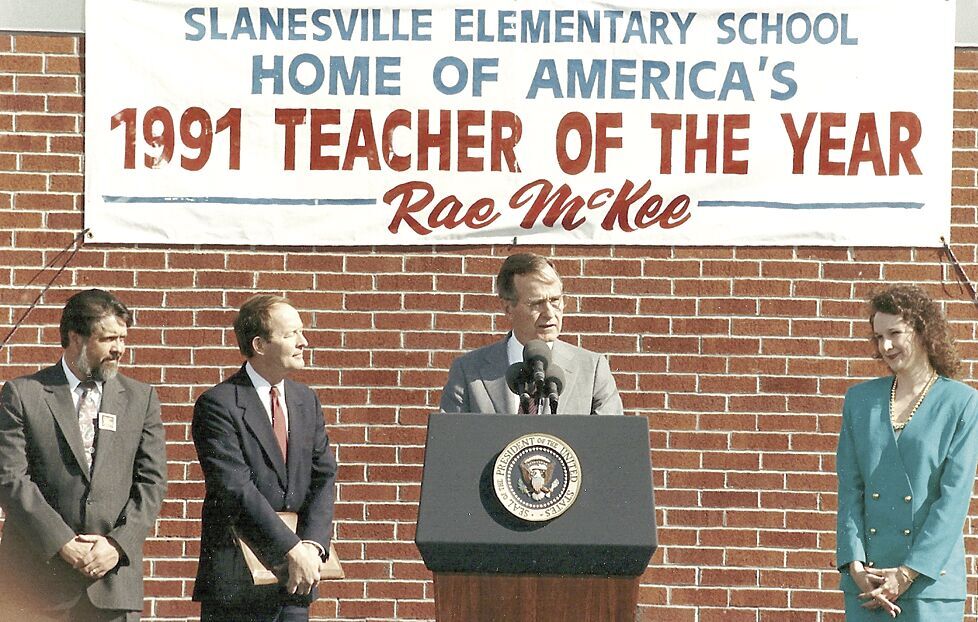 The president gave a speech honoring the Slanesville teacher. 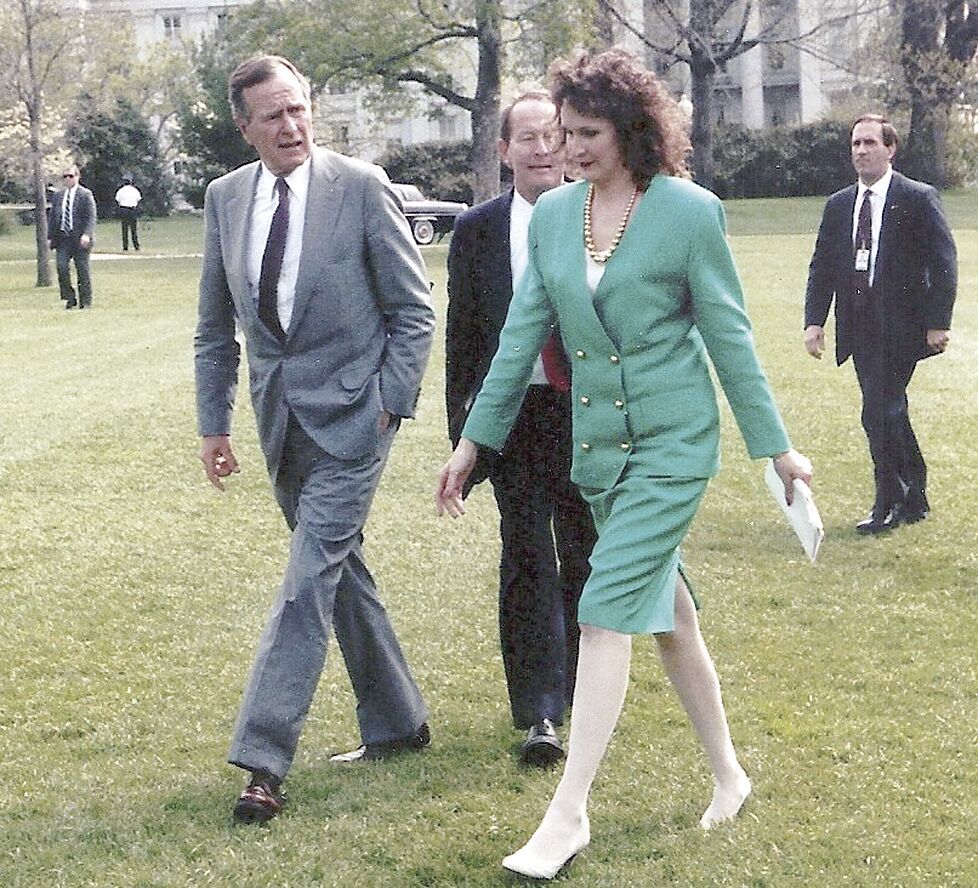 Rae Ellen McKee makes her way across the White House lawn with the president.

Rae Ellen McKee and the president share a laugh aboard Marine One.

The president participated in Rae Ellen McKee’s reading lesson, centered on Cynthia Rylant’s book, “When I Was Young in the Mountains.”

Rae Ellen McKee and President Bush wave goodbye to the many onlookers on the Slanesville property.

The president gave a speech honoring the Slanesville teacher.

Rae Ellen McKee makes her way across the White House lawn with the president.

Three decades ago, a Slanesville teacher put Hampshire County in the national spotlight

One hour is how long it took to begin Rae Ellen McKee’s journey as National Teacher of the Year in 1991, and now, 30 years later, it’s just as exciting to see Hampshire County on the map for education.

McKee, a 33-year-old reading specialist at SES who won the national award is the gem in the crown of change for the schools in the Mountain State, and when President Bush visited the little rural community in 1991, he brought the eyes of the nation here.

McKee is a native of Levels, and she graduated from Shepherd College and received her master’s degree from WVU. She’s also a 5th generation teacher, so it’s basically in her blood.

President Bush participated in a 15-minute reading lesson led by McKee, where students read “When I Was Young in the Mountains” by Cynthia Rylant, and shared some of his own personal experiences from his youth, all while sitting between student Keith Johnson and McKee’s daughter Molly.

After posing for a group picture with the 26 students in the class, the president proceeded outside where around 1,000 spectators gathered to witness history being made in Hampshire County, and he awarded McKee with the honor.

In his speech, President Bush remarked that teaching is an “impact of mind upon mind and heart upon heart.”

Gov. Caperton announced that April 10 would be dubbed “Rae McKee Day,” to honor teachers across the Mountain State who devote their time to educating the youth.

After the President honored McKee outside SES that windy April day, she accompanied him to Marine One (the presidential helicopter) amid whoops and cheers from the onlookers, and they flew to the White House. There, McKee was able to meet the other 3 finalists for the honor, and her comment at the time was, “All persons who touch children’s lives should be heard and recognized.”

The National Teacher of the Year is contracted to take a year of leave from teaching so they can travel around the country sharing their experiences and “secrets” to making a difference. While the entire Hampshire County community was ecstatic to see one of their own win such an honor, seeing McKee go was bittersweet for some of her students.

Six-year-old Jesse Hall, an SES student at the time, said, “she’s the best reading teacher we’ve ever had. She’s number 1.”

The 1-hour visit was no easy feat to put on: security was tight. Extremely tight, even, in the wake of the attempted assassination on Ronald Reagan 10 years earlier. Over 800 people were ushered through a metal detector, personal items were hand-searched and banners were set up on the SES property to obstruct the view from the wooded area on the edge of the property. Safety was a top concern.

The entourage even requested 150 outside telephone lines from General Telephone, which serviced Hampshire County at the time. It was a serious operation.

The memorable event went off without a hitch, law enforcement officials reported after the fact.

“Everything went smooth, we had no problems and nobody so much as made a noise when the president was speaking, said then-state police First Sgt. R. L. Johnson.

Now, 30 years later, McKee is living in Houston, retired from her career in education, but the 1991 honor remains an incredible achievement in her life as a teacher.

“It was a really big deal for West Virginia, Hampshire County, Slanesville, the community, teachers, staff, parents and students, some who are now in their 40s,” reminisced McKee.

The award’s implications continue to be a shining light for Hampshire County Schools. Photos from the event are framed and hang in the Central Office on School Street in Romney.

It’s not every day that a small, rural community sees national attention, and because of McKee, Hampshire County was put on the map.