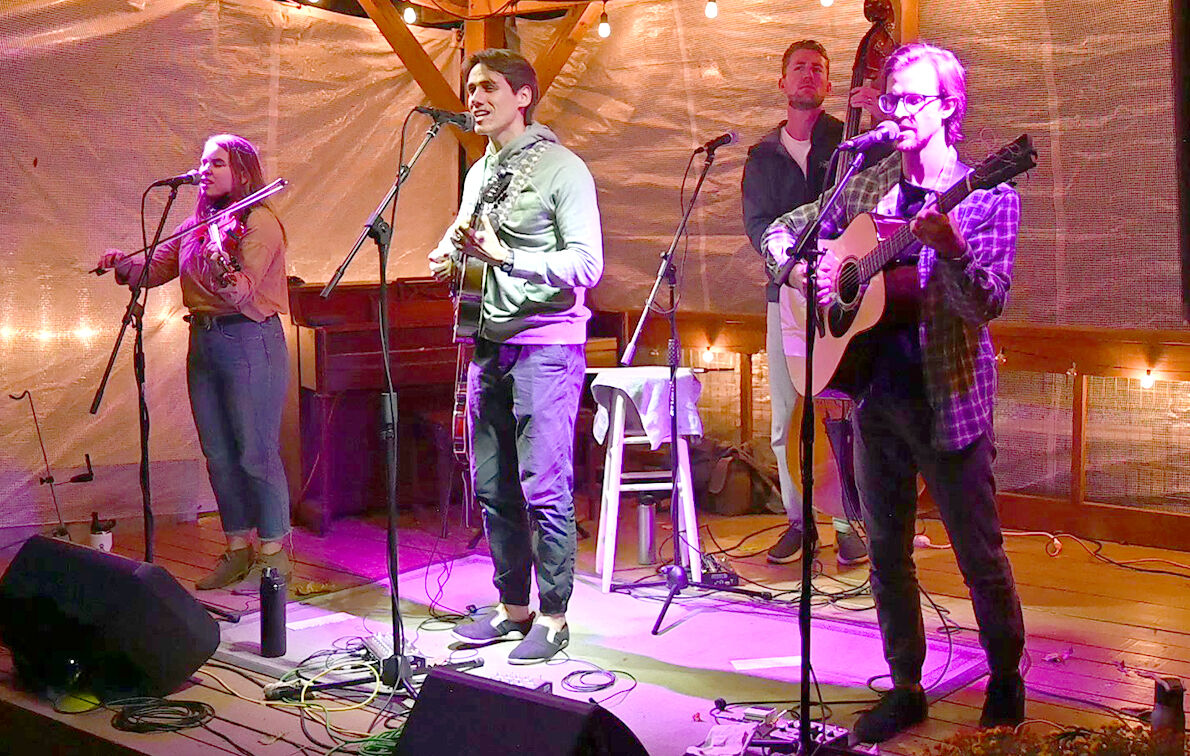 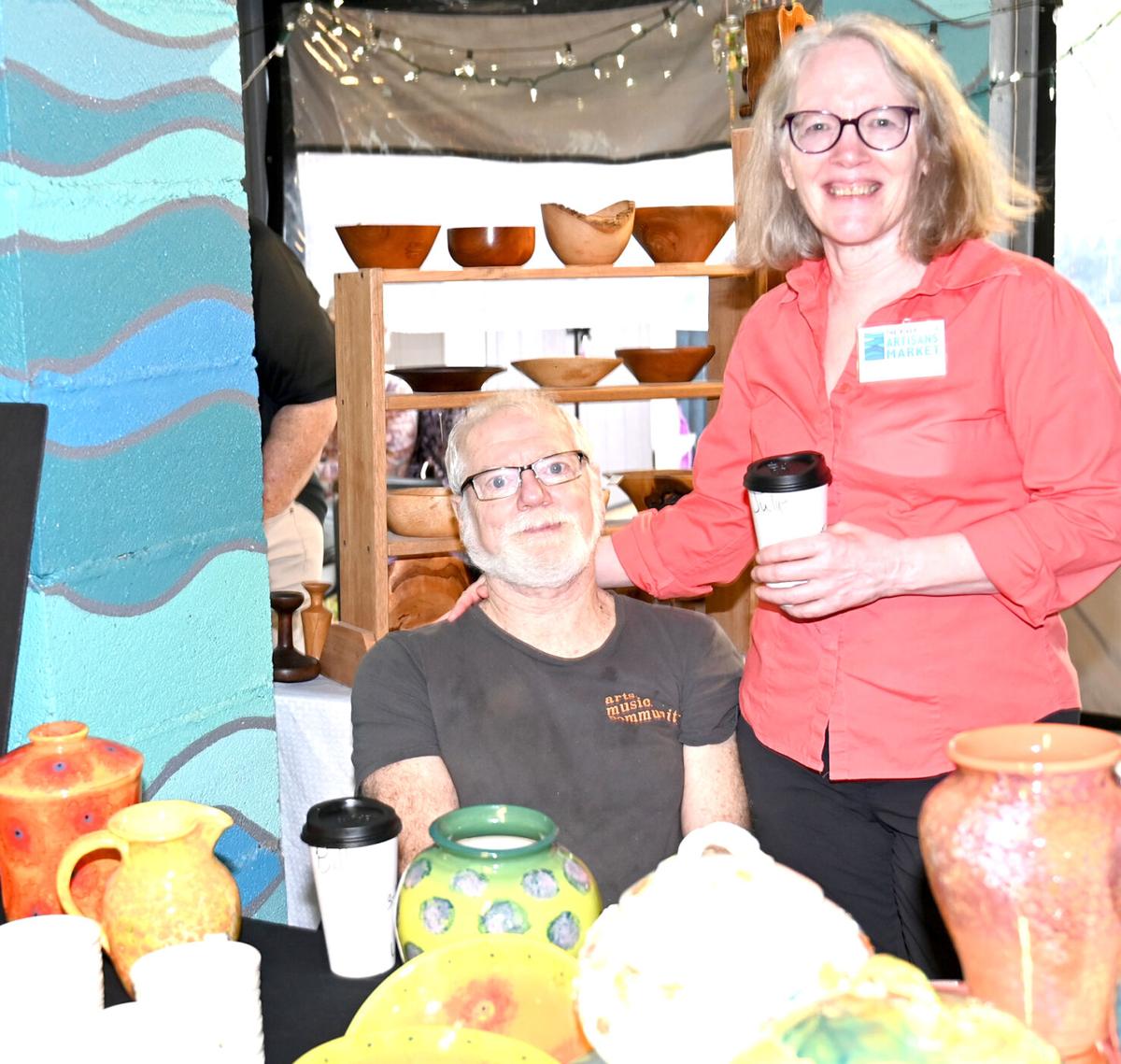 River House Artist of the Month Julie Farrar, whose works are displayed on the walls of the upstairs cafe, was selling her pottery at the Artisan’s Market. 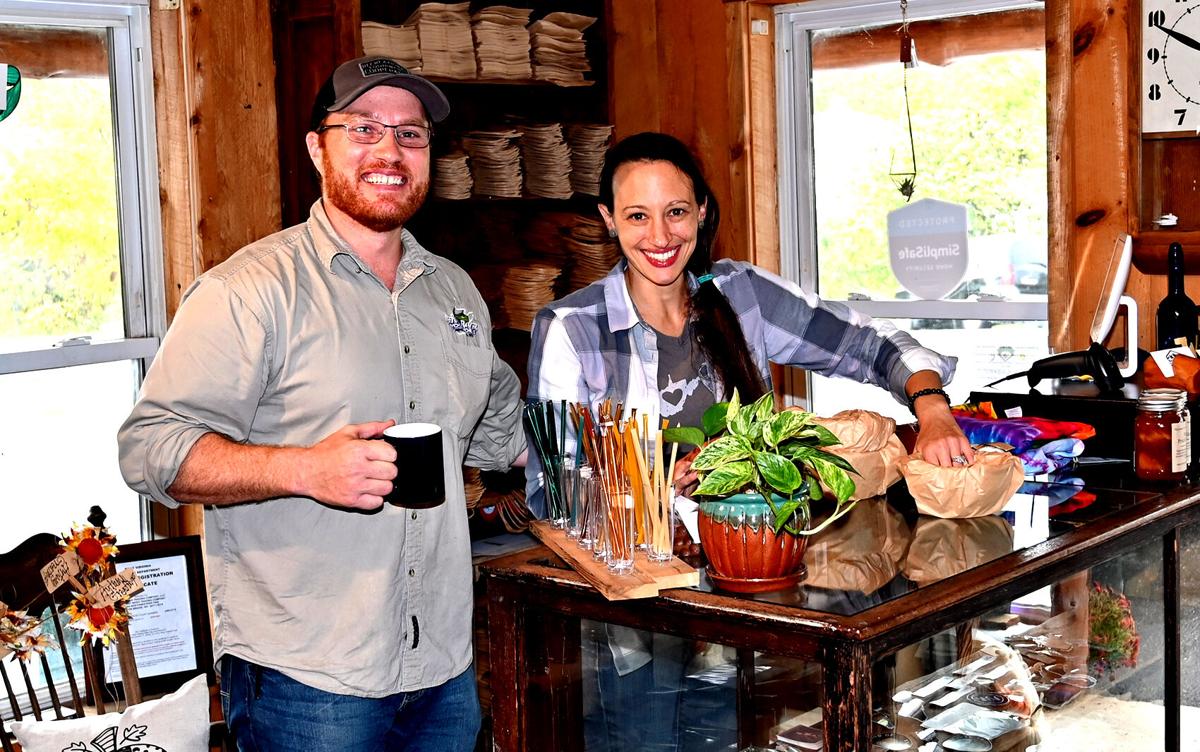 Logan Mantz, working at the Bent River Trading Company cash register with wife Justine, said their intent was to support the arts, and was pleased to report they had already sold work by over 70 of their 100+ artists.

River House Artist of the Month Julie Farrar, whose works are displayed on the walls of the upstairs cafe, was selling her pottery at the Artisan’s Market.

Logan Mantz, working at the Bent River Trading Company cash register with wife Justine, said their intent was to support the arts, and was pleased to report they had already sold work by over 70 of their 100+ artists.

Capon Bridge was bustling with art last Saturday — 2 opportunities to purchase works by local artists and the last of a series of musical performances funded by a state grant.

“All of our new arts activities and venues in town make a positive impact on our community,” the River House’s Beth Reese said. She mentioned community-building, opportunities for employment, and an increase in tourism that boosts the local economy as benefits brought to Capon Bridge.

Pointing out the many ways that these activities benefit the community, Reese noted statistics released this year by the National Endowment for the Arts that estimate the arts and cultural activities contribute $1.6 billion annually to the state’s economy.

Saturday began with a River House Artisan’s Market, at which a dozen local artists offered creations that included jewelry, pottery and woodcraft.

The vendors seemed happy with the turnout even though pouring rain drove their tables under cover, with 7 booths located in the Otter’s Den under the building, and others set up on the stage and under canopies in the River House yard.

Along with publicity for their own Artisan’s Market, the River House was promoting Saturday’s grand opening of the Bent River Trading Company, which transformed the Bent River Woodworks building into another venue for sales by local artists.

Bent River Woodworks’ furniture had been moved to an outbuilding, and the main building filled with shelves displaying the work of over 100 West Virginia artists offered on consignment. The “grand opening” Saturday included live music and food vendors.

Logan Mantz, who was working at the register, said the business’s main purpose was to support artists in West Virginia, claiming the consignment fees charged are the lowest in the state, so far as he has been able to determine.

The weather undoubtedly had an effect on turnout at the 2 markets, but a good number of people turned out anway, and the rain ended by late afternoon. The skies were turning blue by the start of the last event of the day — an evening concert on the outdoor stage at the River House.

It was the last performance on a 6-stop tour for The Arcadian Wild, a Nashville group playing contemporary folk music. And the show was the last in a series of events funded by a grant the River House received from the West Virginia Division of Arts, Culture and History and the National Endowment of the Arts.

Reese reports that state grants funded 8 programs at the River House this fall, including a performance of Shakespeare’s “Twelfth Night” by Clarksburg’s Vintage Theatre Company and storytelling by Adam Booth as well as musical events.

Arcadian Wild spokesman Lincoln Mick said performing in West Virginia was a homecoming of sorts for him, since he was born in Morgantown and spent his first 5 years in Grafton, before moving to Florida.

Mick, who plays the mandolin, and Isaac Horn (guitar) write much of the group’s music, which was received enthusiastically by a crowd seated at tables filling the yard. Most of the songs the band played were their own — including a couple of new compositions.

Blazing fire pits in the River House yard warmed audience members at nearby tables as the sky darkened and the night grew cooler. The band finished its performance under a bright autumn moon and received a standing ovation.

Though Mick described their River House performance as the last in their current tour, the band will hit the road again to perform at the Old Settlers Music Festival outside of Austin, Texas, this Saturday, with more concerts to follow.

Meanwhile the River House will offer a Friday night online viewing of award-winning videographer Richard Anderson’s 60-minute documentary based on “Passages” — the River House experiment conveying messages through art, and Chris Haddox will bring his “honest songs from the mountains of West Virginia” back to the River House stage on Saturday.