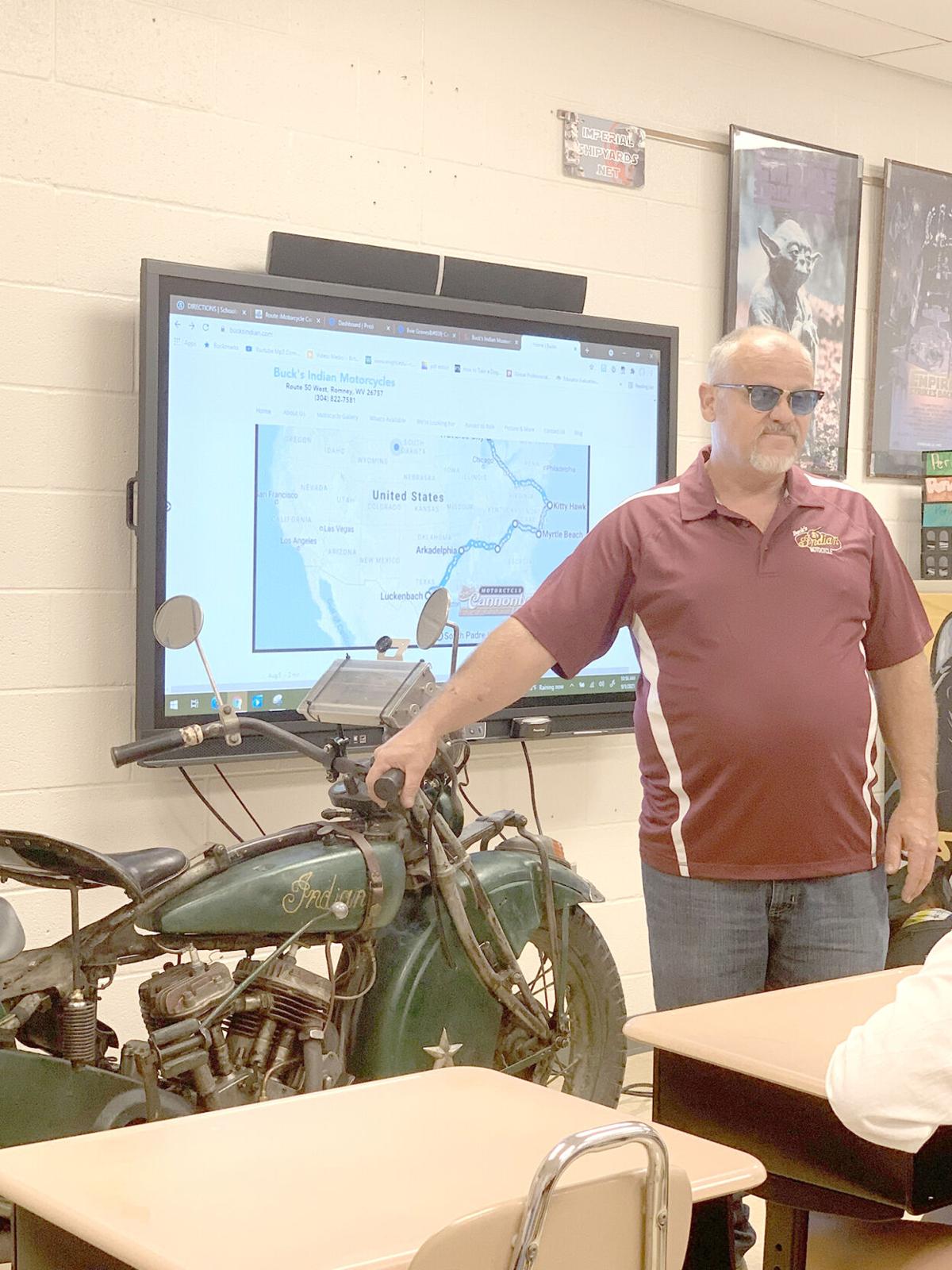 Steve brought one of his antique cycles to RMS 2 weeks ago. Seventh grade students will be using the Motorcycle Cannonball race as a subject for geography assignments in the upcoming weeks. Steve tinkers with his Indian motorcycle during the 1st leg of his journey.

Steve brought one of his antique cycles to RMS 2 weeks ago. Seventh grade students will be using the Motorcycle Cannonball race as a subject for geography assignments in the upcoming weeks.

Steve tinkers with his Indian motorcycle during the 1st leg of his journey.

ROMNEY — “How long until you run out of gas?”

“Have you ever gotten hurt?”

“Have you ever ridden in the snow?”

“How many bikes do you have?”

They avidly scribbled notes while he described his bikes and his plans for the trip. They’ll be following the race virtually, making for an exciting and unique class geography lesson.

Steve and his wife Dee Dee even brought one of his antique Indian motorcycles to Mr. Groves’ 7th grade class, fielding questions about the race, the bike, the terrain and more.

Steve isn’t competing in these races himself, he said.

“To him, it’s the challenge of building it and every 2 years, riding it,” said Dee Dee.

“My bikes are too new,” Steve added.

Steve described that his dad always rode Indian motorcycles, and he was never really able to ride the antique cycles far.

“He’d always talk about riding one from Moorefield to Purgitsville and back,” Steve said. “That was a really big trip for him.”

When the 1st Motorcycle Cannonball race was being planned in 2009 by Cannonball “founding father” Lonnie Isam Jr., its goal was to get these antique motorcycles back where they belonged: on the road.

“You have all these motorcycles that you never really rode, and the Cannonball gives us something to do,” Steve explained.

Dee Dee added, “The vision was to take all of these antique bikes and show them off so that people could understand the history.”

Steve relishes the challenge of building the bikes, he said. So much so, that his son Jared rides a motorcycle that is built entirely from parts. Steve’s collection is comprised of over 50 bikes in his museum west of Romney, and his oldest bikes date back to 1916.

He recounted the Motorcycle Cannonball race of 2016, and explained to the Mr. Groves’ students that in that particular race, all of the bikes had to be 100 years old or older.

This year, the race will run from north-to-south (as opposed to coast-to-coast), with riders beginning their journeys last Thursday in Sault Sainte Marie, Michigan, and scheduled to finish Sept. 26 on South Padre Island, Texas.

Along the way, riders will stop in places like Myrtle Beach, Maggie Valley, North Carolina, Birmingham and Texarkana, Texas.

The planned route makes it a perfect geography lesson for RMS students, and, principal John Watson added, it’s perfect because Steve himself attended Romney Junior High in his childhood.

“When you were in 7th grade, did you ever dream that you’d be competing in cross-country motorcycle races?” Watson asked Steve, who responded simply with, “No, not at all.”

Watson reminded students that they are in charge of what they do in their lives.

“You guys determine what you do,” he said. “As he goes through and shows you videos, you get to see those parts of the country that you might not get to see otherwise.”

This week, riders in the Motorcycle Cannonball will stop in North and South Carolina as well as Tennessee. Dee Dee said that along the route, she’d update students with blog posts to aid them in their projects, as well as return to the classroom to talk about their journey upon their return to Hampshire County in the beginning of October. o