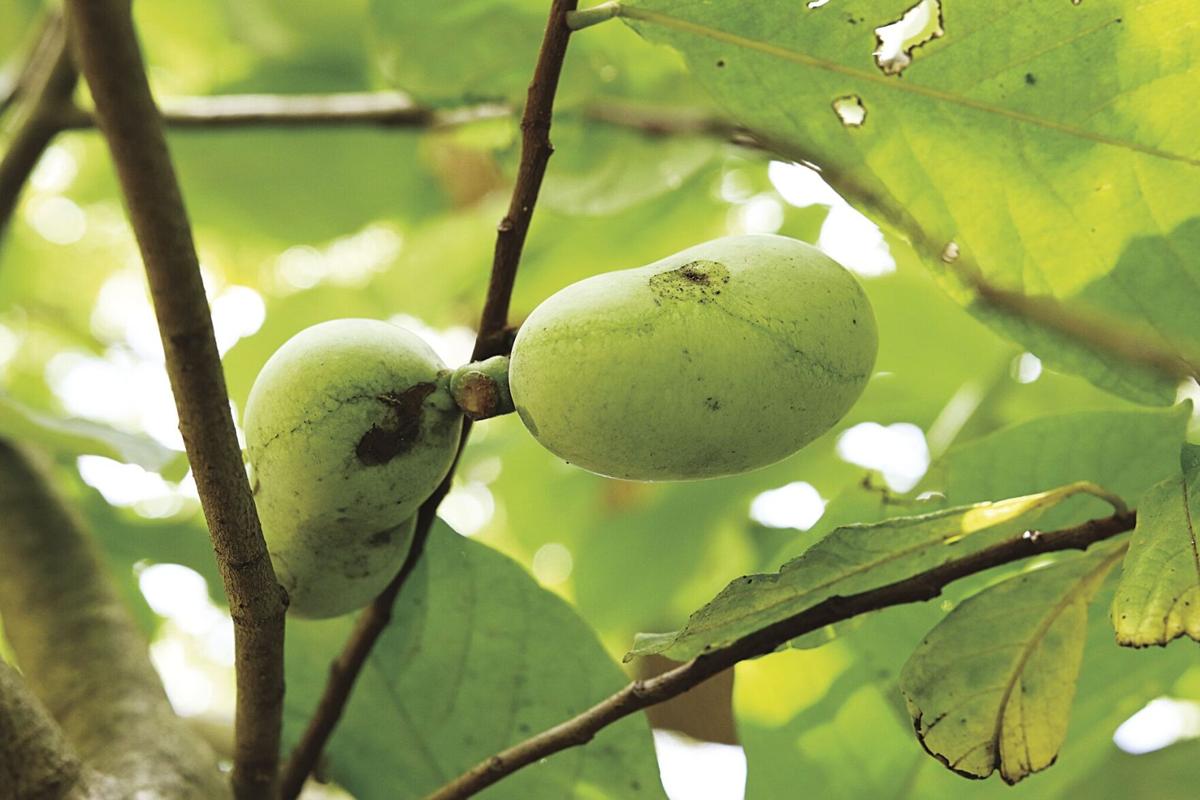 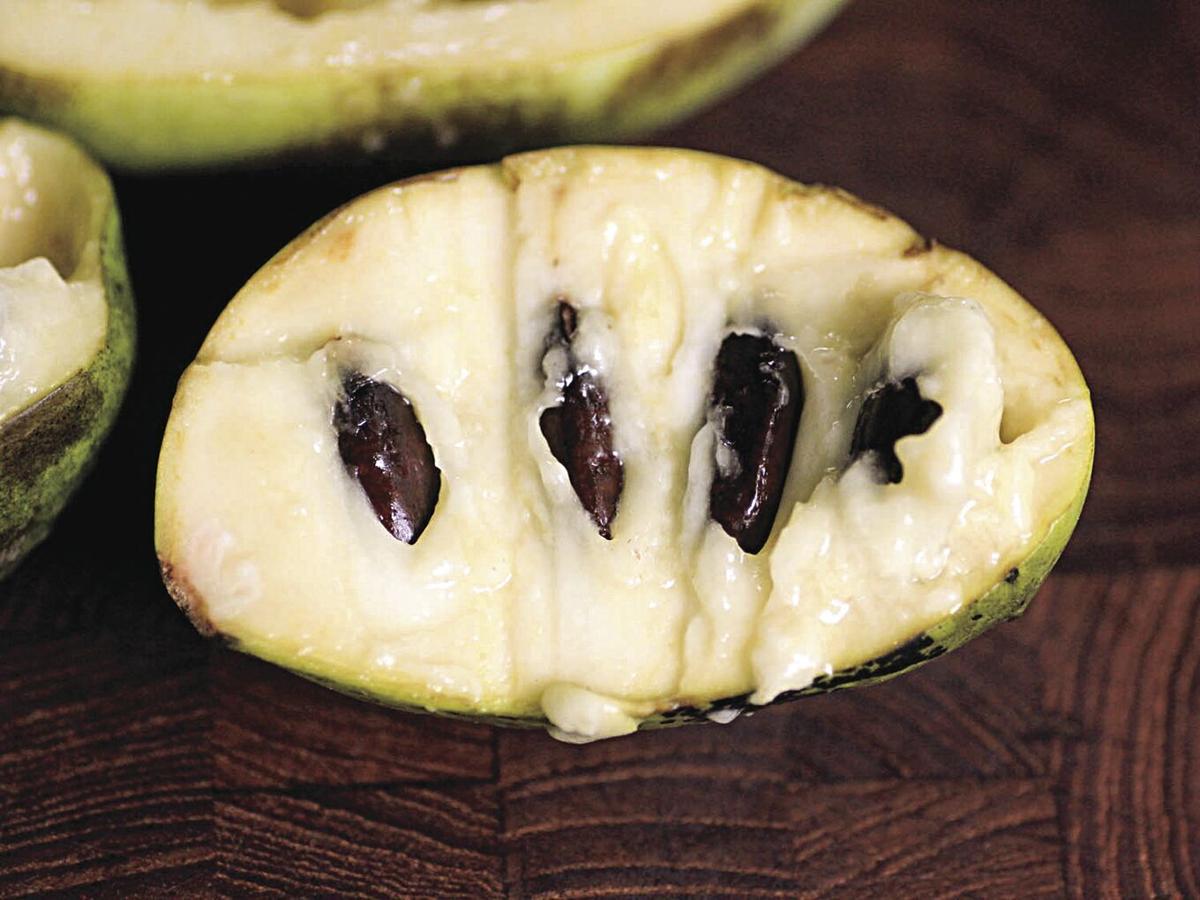 The largest native fruit in North America, the Pawpaw, has seen a resurgence of popularity in the last few years. However, along the Potomac River in the Eastern Panhandle of West Virginia, I’m sure the pawpaw has never left the public eye.

In Hampshire County, we are just a few miles away from the town of Paw Paw, 1 of several towns named Paw Paw in states across the Eastern U.S. If you decide to take a walk along the C&O Canal trail in the next month you won’t miss the pungent smell of this ripening native fruit.

The pawpaw, Asimina triloba, is the only member of the Annonaceae plant family that is adapted to a temperate region. Pawpaws are a true North American native fruit — unlike the apple or the peach, which were introduced from the Middle East and Asia.

Several tropical and sub-tropical fruit crops are related to the pawpaw, including the soursop, cherimoya and custard apple. This plant family relationship may explain why the pawpaw tree looks as if it belongs in the tropics.

Pawpaws taste like a combination of a banana and a mango. They have flexible greenish skin and are full of large brown seeds. Pawpaw trees are found in low wet areas, especially along rivers or creekbeds.

Large groups of pawpaw trees form in the forest understory by sending out root suckers. Although an Appalachian staple, pawpaws can be found in the plains along the Gulf Coast to as far north as Canada.

The bloom of the pawpaw is a stinky maroon flower that you can find before leaves emerge in the spring. Pawpaws play an important ecological role as the host plant of the Zebra Swallowtail butterfly.

Zebra swallowtail butterflies feed on nectar from several plant species native to the Appalachian region, but the butterfly lays single green eggs on the lower side of pawpaw leaves and the caterpillar will feed solely on pawpaw before forming a chrysalis.

The pawpaw has been written about by generations of American explorers. In 1541, an officer in Hernando de Soto’s expedition wrote about Native Americans in the Mississippi Valley cultivating and eating the pawpaw. It is believed the cultivation and trading of the pawpaw by Native American tribes contributed to the large area where pawpaw trees are found.

Presidents George Washington and Thomas Jefferson also had a love for the pawpaw. Jefferson even grew his own at Monticello. The pawpaw even played a role in sustaining the Lewis and Clark Expedition.

Pawpaws are a great addition to the home landscape. The pawpaw suffers from very few pests and diseases. Just like the numerous apple cultivars available, there are over 27 named varieties of the pawpaw and trees can be bought from commercial nurseries.

Some of the most popular varieties today include the Allegheny, Susquehanna, Shenandoah and Potomac. Do these names sound familiar? These cultivars are named after the major rivers that create ideal growing conditions for the pawpaw.

Pawpaw trees need humid, hot summer weather and cool winters. Naturally they are found in the understory of the forest, but the pawpaw can be commercially grown in the sun.

Pawpaws planted in the sun will produce more flowers and therefore more fruit. However, it’s important to provide shade for the first few years before planting into a full sun location.

Like many fruit trees, pawpaws benefit from grafting. Commercial pawpaws are grafted onto a seedling rootstock. Grafted pawpaws produce fruit in about 3-4 years; pawpaws that are grown from seed will not produce fruit for 8-10 years.

Pawpaw seedlings should be planted 8-10 feet apart in rows around 18 feet apart. When planting pawpaws select a location with slightly acidic soil that is fertile and well drained.

Although you can plant pawpaws in both the spring and fall, they will adapt better with a spring planting. Two separate cultivars must be planted to ensure fertilization and fruit set.

Pawpaws have a short shelf life and bruise easily, so they are not often commercially cultivated.

Luckily, they are easy to find in our region. If you don’t want to go for a hike by the river many local farmers markets are starting to sell pawpaws.

Pawpaws are best for fresh eating. Simply break or cut them in half and scoop out the seeds and enjoy as a snack.

If you find yourself with a large number of pawpaws, try mashing the flesh and freezing it for use in breads and muffins. Pawpaw is a great substitute for bananas or applesauce in baking.

Use in ice creams, sorbets, chiffon and mousse. This native fruit also has numerous health benefits – pawpaws are high in antioxidants and several essential nutrients. They have a similar nutritional profile to an apple, banana or orange.

Place all ingredients into stew pan and stir together. Cook over medium heat until thickened. Pour into unbaked pie shell and bake until the crust is done.

Make a meringue by beating the egg whites stiff with 3 Tbsp. sugar and a pinch of salt. Pour custard into a baked pastry shell and cover with meringue. Bake in a moderate oven (350) for 12 minutes or until meringue is browned. Serves 6 to 8.

Preheat oven to 375° F. Grease a pair of 9-by-4-by-2 loaf pans. Beat together butter, sugar and eggs. Add and beat in the pawpaw pulp and lemon juice. Sift the flour and baking powder together, and stir them into the batter.

Stir in the pecans and scrape the batter into the loaf pans. Garnish each loaf with 8 pecan halves, and bake for 1 hour and 15 minutes. The top corners of the loaf will burn, but that adds flavor and character.

Scald 3 cups of the milk in the top of a double boiler. Beat eggs well; add salt, sugar, and the remaining cup of milk. Stir egg mixture slowly into the hot milk and cook over a small amount of simmering hot water, stirring constantly, until mixture just coats a clean metal spoon.

To prevent curdling, do not have the water boiling vigorously, and take care not to overcook. Stop cooking as soon as the custard coats the spoon and remove from heat at once. Cool pan of custard in another pan containing cold water, then chill thoroughly in refrigerator.

Combine pawpaw puree with the lemon juice and add to the chilled custard along with the cream and vanilla. Pour mixture into a chilled 1-gallon ice cream freezer canister and fit dasher into place. Freeze and ripen according to directions accompanying ice cream freezer, or as follows:

To repack the freezer, remove the dasher, plug up the hole in the lid of the ice cream canister, drain out the salt water through the hole in the side of the ice cream freezer, and add fresh ice and salt to fill the freezer tub. Put cracked ice, but no salt, over the top of the canister, too. Cover the whole freezer with blankets or newspapers and let it stand in a cool place for several hours.

Preheat the oven to 350°F and grease one large cookie sheet. Peel and seed fresh pawpaws and process in a food processor until fine. Sift together the flour and baking powder, and set aside. Cream the butter and sugar. Add the egg. Add the flour mixture and then add the pawpaw pulp. Chop half the nuts (reserve 16 pieces) and blend them in.

Drop by teaspoonfuls onto the prepared cookie sheet and press a piece of black walnut onto the top of each cookie. Bake 12 minutes or until brown across the top. Makes about 16 cookies.

*This recipe was written for soursop but may be suitable for pawpaw as well. Wash and peel pawpaw, then mash in a bowl with lime peel. Gradually stir in 1 pint water. Mix well and strain. Add another 1/2 pint water, mix, and strain again to be sure all the flavor is extracted. Add salt and sugar. Chill before serving.

Peel pawpaws. Put in kettle with water, without removing seeds. Boil until soft, then put through a sieve. Add sugar and juice of orange and lemon. Boil until thick. Grated rind of orange or lemon may be added. Put in sterilized jars and seal.

Whisk and mix in the other wet ingredients: pulp, milk, and butter. Pour and scrape the batter into the baking dish and bake 50 minutes. To test for doneness, slide a toothpick into the center of the pudding, and it should come out clean. Like custard, if you jiggle the pan, the center should be set.

Serving: Cut the pudding into squares, and serve it with vanilla ice cream, whipped cream, hard sauce, or crème anglaise.