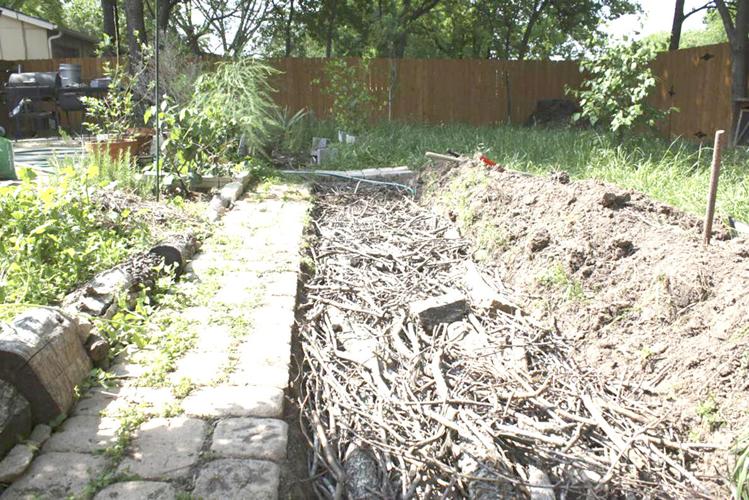 A base layer of logs used in creating a raised Hugulkultur bed, a layer of garden debris and twigs and a completed raised bed.

I don’t have a giant property, so I strategize to get the most use of the garden I have, and that includes planting vegetables and herbs in raised beds and containers.

I’ve been growing edibles in 2 4-by-4-foot cedar boxes that my husband built about 10 years ago, and every few years, I invest in copious amounts of compost and organic topsoil to refill them. Some friends garden in much larger beds and the cost to fill them would make your salad spin.

A better method, “Hugelkultur,” is said to have been used in Germany and eastern Europe for centuries as part of a more extensive permaculture system, which maintains that nature should be left to do its own thing with as little human interference as possible. That includes allowing logs, branches and other plant debris to decompose into nutrient-rich soil, as it would on a forest floor, which is arguably better than anything that comes in a bag.

Hugelkultur, or “hill culture,” has been a darling of the permaculture world since the 1970s, but has been gaining mainstream and social-media attention lately.

It can be used in raised beds or in mounds (or berms) directly on the ground.

Here’s how it works:

Instead of filling deep raised beds solely with purchased soil and compost, create a layered foundation of yard waste to reduce the amount of soil needed and increase nutrients and plant yields.