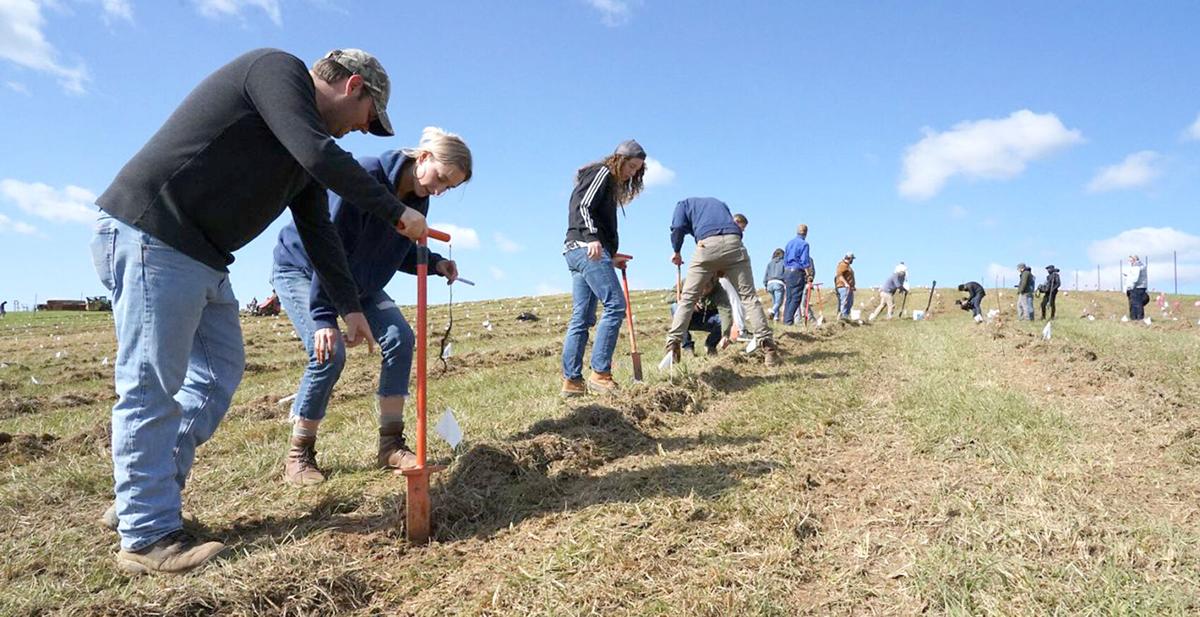 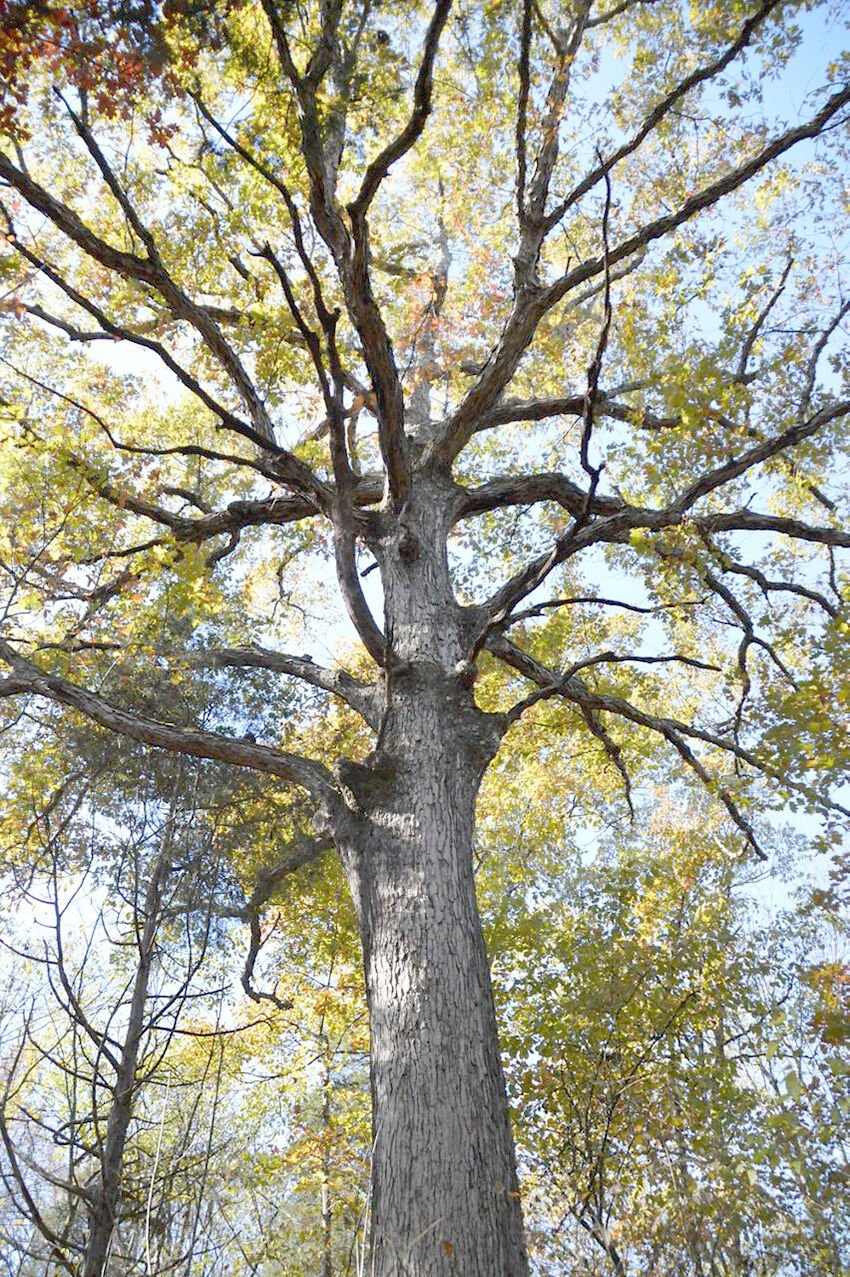 MM1 has been exposed to incredible climate variations and is estimated to be 300 to 500 years old.

MM1 has been exposed to incredible climate variations and is estimated to be 300 to 500 years old.

LORETTO, Ky. — On a Central Kentucky hillside, over a thousand American white oak stand in neat rows, just barely towering over nearby blades of grass.

These trees, currently just seedlings, have sat in this field on the Maker’s Mark Starhill Farm for less than a month. But years from now, researchers hope they can provide answers on how to protect a species endemic to many American forests and necessary for the creation of the amber liquid that has become one of the state’s most famous exports.

In mid-April, project participants descended on the grassy hillside outside Loretto and planted the first volley — over 1,400 trees — of what will become the world’s largest repository of white oak.

The repository was made possible because of a 3-way partnership between University of Kentucky researchers, the Maker’s Mark distillery and barrel-makers from the Independent Stave Company. The collection of white oak will also tie in nicely with another Maker’s Mark and UK effort to map the entire genome of the white oak species.

“As we unlock the genome sequencing, we can find out which of the DNA pairs actually affect flavor,” said Brian Mattingly, the director of bottling and warehousing operations at Maker’s Mark. “Hopefully, we can actually end up with a barrel that contributes even bolder flavor to our bourbon.”

The site, surrounded by fencing to prevent nearby deer from turning the project into lunch, will hold 300 unique families of white oak collected from across the eastern United States. Eventually the trees will span 23 acres and could stay rooted in the land long after their planters are gone.

“Maker’s Mark has committed to having white oaks on that site, essentially into perpetuity,” said Laura DeWald, a tree improvement specialist at UK who helps to run the university’s White Oak Genetics project. “So even though we’ll get some early results right away, the really nice thing is that these seedlings will be allowed to grow into big trees. It will be this really beautiful site with these big giant white oak trees.”

What is American White Oak?

According to the U.S. Forest Service, the white oak’s natural range spans much of eastern North America. The trees can be found in southwestern Maine all the way down to far eastern Texas.

In many natural forests currently, researchers have noted that there are many large, old white oak that make up parts of a forest’s overstory and good regeneration of white oak on the forest floor, DeWald said. However they’ve noted that white oak are starting to go missing from the middle layers.

To combat this, DeWald said forest managers are working to introduce seedlings into the forests that are “more competitive” and more likely to survive to become larger, mature trees. But to get stronger white oak seedlings, researchers need high-quality acorns from high-quality trees.

The seedlings being planted on Maker’s Mark land are grown from acorns that have been collected from around the eastern United States and sent to Kentucky. DeWald said they have the GPS coordinates for where their acorns have been collected.

One of the “great characteristics of the project is that it’s “highly collaborative,” DeWald said. State and federal agencies as well as volunteers are helping to collect acorns from across the country. As researchers receive more of the families of white oak, and have time to develop them from acorns to seedlings, they’ll return to the repository at Maker’s Mark to plant more trees.

Over the course of several years, researchers will be able to watch the trees grow and know what families of white oak produce offspring that might grow faster, taller, straighter or into a tree that “someone wants to make a barrel out of, for example.”

In the first 7 to 15 years of a white oak’s life, researchers can determine what a tree’s growth rate and survivability will be, DeWald said. However, determining wood quality could take 50 to 100 years, as the boards for barrels require mature wood.

Why is white oak essential for bourbon?

Much of the color and flavor in bourbon comes from the aging process inside white oak barrels, Mattingly said.

Raw, un-aged whiskey — known as “white dog” — is left to sit in white oak barrels that have been charred on the inside. The whiskey-filled barrels are left to age about 6 years in maturation warehouses. Mattingly said white oak is great for barrels because the wood tends not to leak.

“We want to get as much of that liquid that we put in 6 years ago back out,” Mattingly said.

Inside the barrel, the whiskey gains its amber color and absorbs the wood sugars as well as vanilla and caramel flavors, he said.

“We can only use the white oak barrel one time, and then we have to use a new barrel, each batch of bourbon,” Mattingly said. “So it’s vital to us to ensure that there is a sustainable supply of American white oak.”

There is a great example of a healthy, long-living white oak already on Maker’s Mark property, said Seth DeBolt, the director of the James B. Beam Institute for Kentucky Spirits at UK.

Dubbed the “mother tree,” this “absolutely magnificent specimen” of a white oak is surrounded by a small forest near the bank of a lake on Maker’s Mark property. The tree has lived for 300 to 500 years, said DeBolt who is also a professor of horticulture at UK.

“It’s just been able to tolerate the test of time, which is a nice indicator that it’s a very, very healthy and good example,” DeBolt said.

If somewhere in the “millions of millions of oak trees” there was a specific population resistant to a disease, “you’d quickly be able to realize why it was resistant, and then look for more plants that contain that marker in a very efficient way,” DeBolt said.

DeBolt said he’s proud that the bourbon industry was investing land and resources into scientific research that could help conserve the tree species.

“That level of commitment to conservation, coming from the bourbon industry is a real indication of the commitment to the environment and understanding the forest and water and having clean water and air,” DeBolt said.