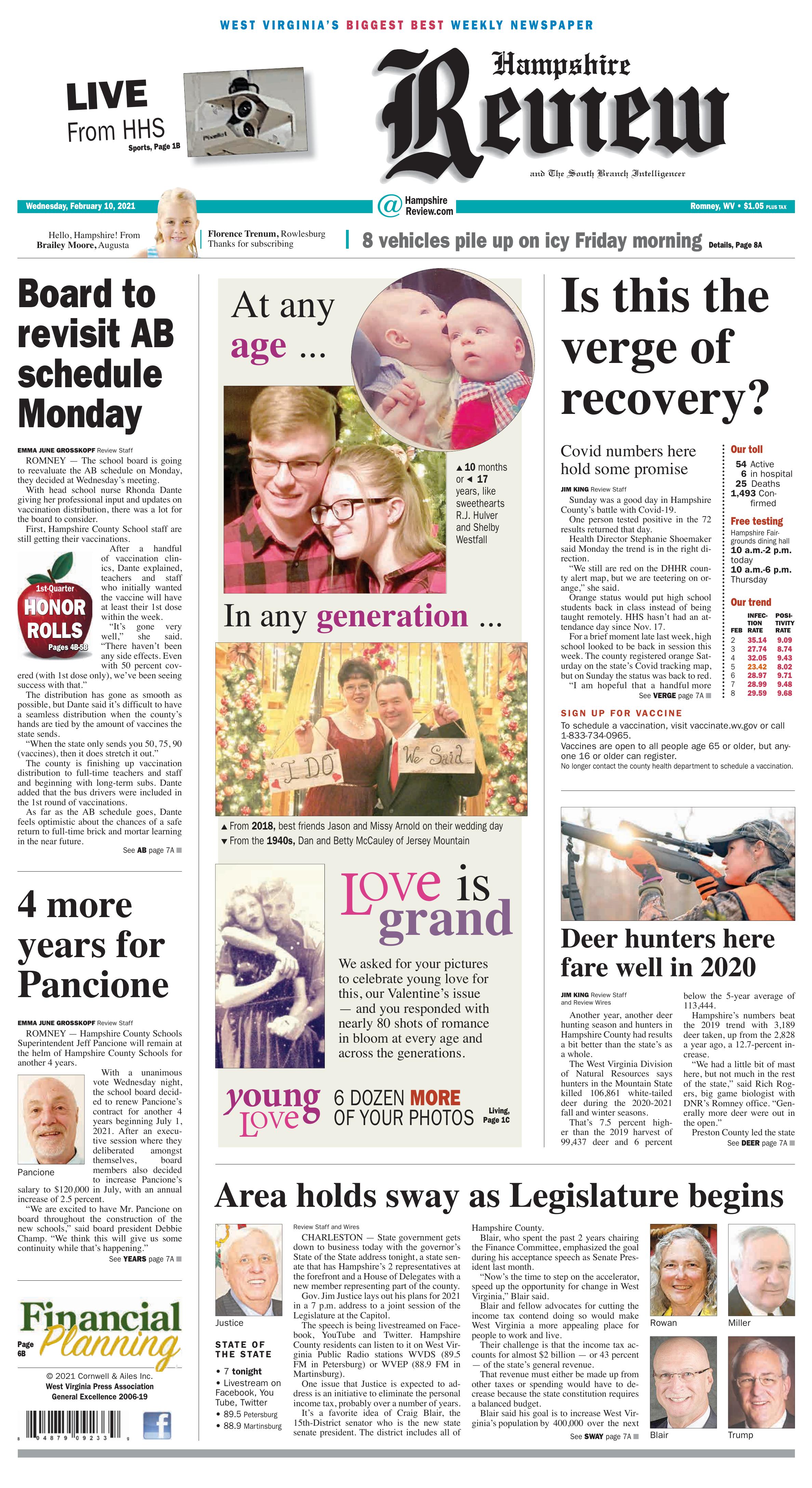 ROMNEY — The school board is going to reevaluate the AB schedule on Monday, they decided at Wednesday’s meeting.

With head school nurse Rhonda Dante giving her professional input and updates on vaccination distribution, there was a lot for the board to consider.

First, Hampshire County School staff are still getting their vaccinations.

After a handful of vaccination clinics, Dante explained, teachers and staff who initially wanted the vaccine will have at least their 1st dose within the week.

“It’s gone very well,” she said. “There haven’t been any side effects. Even with 50 percent covered (with 1st dose only), we’ve been seeing success with that.”

The distribution has gone as smooth as possible, but Dante said it’s difficult to have a seamless distribution when the county’s hands are tied by the amount of vaccines the state sends.

The county is finishing up vaccination distribution to full-time teachers and staff and beginning with long-term subs. Dante added that the bus drivers were included in the 1st round of vaccinations.

As far as the AB schedule goes, Dante feels optimistic about the chances of a safe return to full-time brick and mortar learning in the near future.

After all, exposure to the virus has been negligible within the schools since they reopened for grades K-8.

“There have been none in school,” Dante pointed out, referring to Covid cases. “All exposures have occurred outside of school.”

As far as keeping the schools safe, she said staff have been following the health department recommendations.

“I think our students really need to get back,” Dante admitted. “It’s been tough for parents to plan.”

She said that school staff need to continue being vigilant, but the county is moving in the right direction.

The high school will remain remote while the county is in Red on the state Covid map, as per the directives from the state.

The board discussed the AB schedule currently in place for grades K-8 and debated their options for the students’ possible return to school.

They rolled around 3 options: keeping the AB schedule completely, the county staying AB with students who are at risk for retention going back with the 4-1 schedule (4 days in person with virtual Fridays) or pick a future date for everyone to go back to the 4-1 schedule.

Board member Bernie Hott made a motion for Hampshire County Schools to stick it out with the AB schedule until they could discuss it at the Feb. 15 meeting, when ideally most teachers and staff would have at least their 1st dose of the vaccine.

The motion included a caveat that students deemed “at risk” could return to school, in-person, with the 4-1 schedule.

“All these at-risk kids need an intervention,” explained board vice president Ed Morgan.

It won’t be until the end of March that everyone’s 2nd doses of the vaccine will be effective, Champ said.

The board’s unanimous decision to wait until Monday, with the motion seconded by Rinker, is the potential 1st step to getting kids back in the classroom. When Monday rolls around, the board will have a decision ahead of them: full-time return to in-person school or staying the course as is.

News
Is this the verge of recovery?

Sunday was a good day in Hampshire County’s battle with Covid-19.

One person tested positive in the 72 results returned that day.

Health Director Stephanie Shoemaker said Monday the trend is in the right direction.

“We still are red on the DHHR county alert map, but we are teetering on orange,” she said.

Orange status would put high school students back in class instead of being taught remotely. HHS hasn’t had an attendance day since Nov. 17.

For a brief moment late last week, high school looked to be back in session this week. The county registered orange Saturday on the state’s Covid tracking map, but on Sunday the status was back to red.

“I am hopeful that a handful more days of trending downwards and we will be able to steadily maintain the orange status on the DHHR map,” Shoemaker said.

The state tracks 2 rates — positivity and infection — to determine a county’s status on the 5-color map.

Positivity rate is the percentage of new cases identified in the number of test results over a 7-day rolling average.

The single positive case on Sunday was hopeful, but it followed 14 positives in 95 cases on Saturday.

A positivity rate above 8 percent puts a county in the red. Orange is 6-8 percent, gold is 4-5 percent, yellow is 3-4 percent and green is under 3 percent.

The 2nd rate is infection — the 7-day average of new cases per 100,000 people. That’s the metric that moved Hampshire to orange status for one day (the state uses the better of the 2 rates — positivity or infection — to categorize each county).

Hampshire isn’t alone, though, in fighting a high infection rate. Every county in the state, except 2, is either red or orange. Mineral and Calhoun counties are gold.

As of Monday afternoon, Hampshire County had just 54 active cases with 6 hospitalizations. Over the 11 months of the pandemic, 1,493 residents have tested positive for the coronavirus and the county says 25 have died, although the state’s website has shown 28 Hampshire County deaths for a few days.

Testing continues with free drive-through clinics from 10 a.m. to 2 p.m. today and 10 to 6 Thursday at the dining hall of the county fairgrounds in Augusta.

Vaccinations continue for those registered who are 65 or older. To speed the vaccinations along, Gov. Jim Justice said Monday that a new partnership with Walgreens will ad 5,800 doses a week to the state’s effort.

Walgreens will receive lists of who to vaccinate based on the counties in which their stores are located. People 65 and older and health care workers who have yet to be vaccinated will be Walgreens’ focus.

With a unanimous vote Wednesday night, the school board decided to renew Pancione’s contract for another 4 years beginning July 1, 2021. After an executive session where they deliberated amongst themselves, board members also decided to increase Pancione’s salary to $120,000 in July, with an annual increase of 2.5 percent.

“We are excited to have Mr. Pancione on board throughout the construction of the new schools,” said board president Debbie Champ. “We think this will give us some continuity while that’s happening.”

Pancione’s contract was on a school board agenda in October, but the discussion was postponed.

Board member Matt Trimble made the motion to approve the superintendent’s contract, and board member Bernie Hott seconded the motion.

Another year, another deer hunting season and hunters in Hampshire County had results a bit better than the state’s as a whole.

The West Virginia Division of Natural Resources says hunters in the Mountain State killed 106,861 white-tailed deer during the 2020-2021 fall and winter seasons.

“We had a little bit of mast here, but not much in the rest of the state,” said Rich Rogers, big game biologist with DNR’s Romney office. “Generally more deer were out in the open.”

“Gun hunting is the biggest part of the harvest for bucks and antlerless deer here,” Rogers noted.

“It is important to note the antlerless harvest is the key component to any deer management strategy, as it controls the future deer population,” said Paul Johansen, chief of the WVDNR's Wildlife Resources Section.

Muzzleloader: The 2020 muzzleloader harvest of 4,615, which does not include 612 deer taken with side-lock and flintlock muzzleloaders during the Mountaineer Heritage season, was 2 percent higher than the 2019 harvest of 4,522 and only 20 deer below the 5-year average of 4,635.

Archery and Crossbow: The bow and crossbow hunters’ take of 31,564 deer, which does not include 30 recurve- and longbow-harvested deer taken during the Mountaineer Heritage season, was 7 percent higher than the 2019 harvest of 29,508 and 12 percent above the 5-year average archery season harvest of 28,278.

The number of harvests in 2020 that were taken with a crossbow increased and was greater than deer reportedly taken by a bow for the 4th year.

Hampshire’s bow totals were 561, on par with neighboring counties. Berkeley had the Eastern Panhandle’s highest total at 857.

CHARLESTON — State government gets down to business today with the governor’s state of the state address tonight, a state senate that has Hampshire’s 2 representatives at the forefront and a House of Delegates with a new member representing part of the county.

Gov. Jim Justice lays out his plans for 2021 in a 7 p.m. address to a joint session of the Legislature at the Capitol.

The speech is being livestreamed on Facebook, YouTube and Twitter. Hampshire County residents can listen to it on West Virginia Public Radio stations WVDS (89.5 FM in Petersburg) or WVEP (88.9 FM in Martinsburg).

One issue that Justice is expected to address is an initiative to eliminate the personal income tax, probably over a number of years.

It’s a favorite idea of Craig Blair, the 15th-District senator who is the new state senate president. The district includes all of Hampshire County.

Blair, who spent the past 2 years chairing the Finance Committee, emphasized the goal during his acceptance speech as Senate President last month.

“Now’s the time to step on the accelerator, speed up the opportunity for change in West Virginia,” Blair said.

Blair and fellow advocates for cutting the income tax contend doing so would make West Virginia a more appealing place for people to work and live.

Their challenge is that the income tax accounts for almost $2 billion — or 43 percent — of the state’s general revenue.

That revenue must either be made up from other taxes or spending would have to decrease because the state constitution requires a balanced budget.

Blair said his goal is to increase West Virginia’s population by 400,000 over the next 10 years. In the past five years, the population has dropped by about 34,000, according to U.S. Census Bureau data.

“We’ve been changing how we do business in West Virginia the last six years,” Blair said, describing the period after Republicans gained majorities in the Senate and House of Delegates. “The tide has changed, and it’s coming in for West Virginia.”

Last November’s elections solidified the Republican majorities in both the State Senate and the House of Delegates.

The 60-day legislative session begins today rather than early January because it’s the year a governor is inaugurated. The state constitution builds in the every-4-year delay to give a new governor time to appoint a cabinet, craft a budget and prepare a state-of-the-state address before the Legislature begins.

The other senator representing Hampshire and the 15th District is Charles Trump, the Berkeley Springs attorney who was the minority leader in the House of Delegates in the early years of the 21st Century.

Ruth Rowan begins her 8th term serving the bulk of Hampshire County in the House of Delegates 57th District.

She chairs the committee on seniors, children and family issues. She sits on the finance committee as well as health and human services and veterans affairs and homeland security.

Taking office as the 58th District delegate is George Miller of Berkeley Springs. The 58th includes the eastern end of Hampshire County.

Miller defeated longtime incumbent Daryl Cowles in the primary, then knocked off Tom Harden in the general election.  Miller will sit on the committees for health and human services, banking and insurance, and small business and economic development.

“He’s going to do a good job,” Rowan predicted.