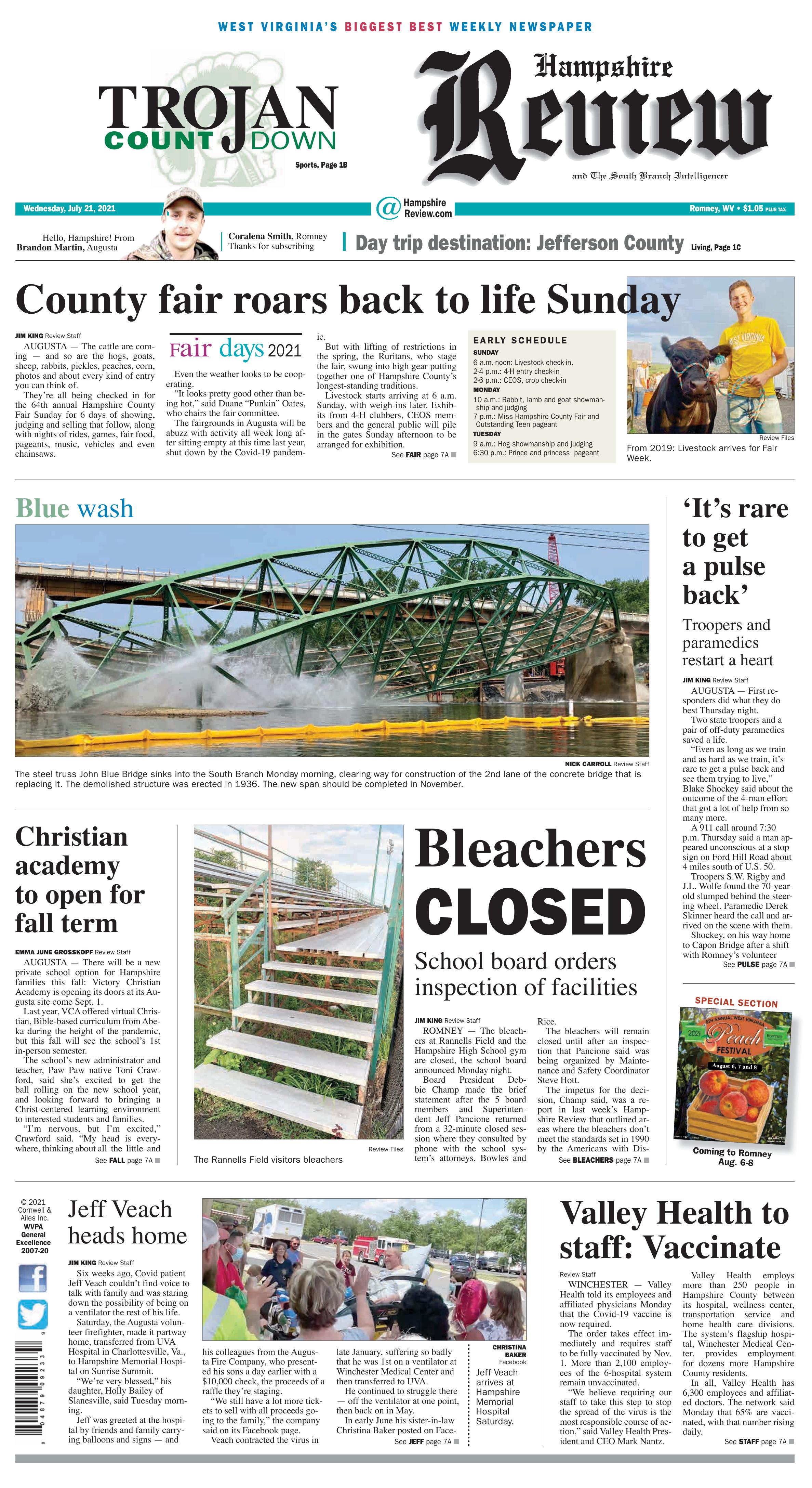 From 2019: Livestock arrives for Fair Week.

From 2019: smiles abound on the midway rides.

From 2019: smiles abound on the midway rides.

AUGUSTA — The cattle are coming — and so are the hogs, goats, sheep, rabbits, pickles, peaches, corn, photos and about every kind of entry you can think of.

They’re all being checked in for the 64th annual Hampshire County Fair Sunday for 6 days of showing, judging and selling that follow, along with nights of rides, games, fair food, pageants, music, vehicles and even chainsaws.

Even the weather looks to be cooperating.

“It looks pretty good other than being hot,” said Duane “Punkin” Oates, who chairs the fair committee.

The fairgrounds in Augusta will be abuzz with activity all week long after sitting empty at this time last year, shut down by the Covid-19 pandemic.

But with lifting of restrictions in the spring, the Ruritans, who stage the fair, swung into high gear putting together one of Hampshire County’s longest-standing traditions.

Livestock starts arriving at 6 a.m. Sunday, with weigh-ins later. Exhibits from 4-H clubbers, CEOS members and the general public will pile in the gates Sunday afternoon to be arranged for exhibition.

Then, on Monday, the gates open, the rides set in motion and the games light up.

Tuesday brings dozens of youngsters vying for crowns in the junior pageant.

A few changes to the traditional fair lineup come later in the week.

• The lineup of fair food will be even fairer. Oates said an ice cream vendor from Elkins — with homemade scoops and milkshakes — and a kettle corn popper from here in Hampshire will be peddling their tasty wares this year.

• Daily livestock showing and judging will happening in the morning instead of late afternoon.

• Wednesday will see a musician onstage, gospel singer Jamie Kimmett, after several years of having productions by Hope Christian Church. He’s performing his set at 7 p.m.

• The livestock auction moves to Friday night from Saturday.

• The mud bog will be on Saturday afternoon to make way for a truck and tractor pull Friday night.

News
‘It’s rare to get a pulse back’

Troopers and paramedics restart a heart

AUGUSTA — First responders did what they do best Thursday night.

Two state troopers and a pair of off-duty paramedics saved a life.

“Even as long as we train and as hard as we train, it’s rare to get a pulse back and see them trying to live,” Blake Shockey said about the outcome of the 4-man effort that got a lot of help from so many more.

Troopers S.W. Rigby and J.L. Wolfe found the 70-year-old slumped behind the steering wheel. Paramedic Derek Skinner heard the call and arrived on the scene with them.

Shockey, on his way home to Capon Bridge after a shift with Romney’s volunteer rescue squad, was next. He found Skinner and the troopers performing CPR.

“We were there without any equipment, rotating on CPR,” Shockey said.

Within 10 minutes, the Augusta Rescue Squad arrived with what they needed.

“I had the ambulance there,” Rescue Chief James “Bubba” Aylor said, “so they’d have equipment.”

That included a defibrillator and medications that helped the rescuers regain a pulse.

“We know what our job to do is and we focus on that,” he said. “Derek and I were talking back and forth,” discussing options.

Too often, Shockey said, situations like this end in the medical examiner being called in to pronounce a death. Getting the heart beating again is rare, he said.

“We were able to get the pulse back and know he’s still alive,” Shockey said. “It gets your heart pumping.”

HealthNet medical helicopter was called out of Martinsburg and flew the patient to Winchester Medical Center. Reports Tuesday morning indicated the man was still in intensive care.

“He has the best chance that pretty much anyone ever has,” Shockey said.

The county’s paid ambulance service also responded to the scene.

AUGUSTA — There will be a new private school option for Hampshire families this fall: Victory Christian Academy is opening its doors at its Augusta site come Sept. 1.

Last year, VCA offered virtual Christian, Bible-based curriculum from Abeka during the height of the pandemic, but this fall will see the schools 1st in-person semester.

The school’s new administrator and teacher, Paw Paw native Toni Crawford, said she’s excited to get the ball rolling on the new school year, and looking forward to bringing a Christ-centered learning environment to interested students and families.

“I’m nervous, but I’m excited,” Crawford said. “My head is everywhere, thinking about all the little and big things that need to get done.”

One of the biggest driving forces behind getting the wheels turning with the academy is the desire to offer a private Christian alternative to an area that relies heavily on the public school system.

“If you want a Christian education for your kid, you have to go to either Maryland or Winchester,” Crawford explained. “Most people I’ve spoken to think its a great idea just to have the option here.”

VCA has contracted with Hope Christian Church in Augusta to offer a secure space for the school. School spokesperson C.J. Ganoe said that this year is a “growing” year for the academy, which hopes to move toward having its own site and facilities in the upcoming years.

Ganoe also pointed out that so far, the community has been extremely supportive of VCA’s mission.

“We’ve been blessed with donors, some not even in our area,” she said. “Our tuition is 3 to 4K less a year than in Winchester.”

Continued community support will allow VCA to maintain their low tuition and possibly even lower it more, making it an affordable option for families looking for private, Christian education for their kids.

This year, the school is hoping to have around 10 to 15 students, just as a transitional year getting back into the swing of things from a virtual year.

Ganoe pointed out that society today has shifted with its values, and VCA hopes to keep Christ at the forefront of education.

“It’s not the same world we grew up with,” she admitted. “It’s changing; it’s evolving.”

Crawford added that VCA doesn’t encourage an isolationist Christian approach, but the opposite:

“Christ asked us to go where (people) need Him,” she explained. “We are equipping our students to go into the world and make an impact. We want to give them that good foundation.”

Tuition is $3,750 a year, including texts, with a $75 registration fee. Tuition is discounted $300 for each extra child enrolled from a family.

Registration is waived for children enrolled by Aug. 8.

Families have the option to pay $395 monthly for 10 months.

The school year will run from Sept. 1 until June 10; Crawford said they were trying to coincide as much as they could with the county’s public schools.

“We are getting a lot of positive reactions,” Crawford said. “The first thing I ask is for people to pray for us.”

Along with prayers, VCA has a number of opportunities for the community to support their mission, including donation avenues and helping sponsor a child’s education at VCA who may not be able to afford it. For more information, find Victory Christian Academy on Facebook.

For an application for enrollment, email VCA at VictoryChristianAcademyWV@gmail.com or contact Crawford at 304-359-1083 or trcrawford.vca@gmail.com.

School board orders inspection of facilities

ROMNEY — The bleachers at Rannells Field and the Hampshire High School gym are closed, the school board announced Monday night.

Board President Debbie Champ made the brief statement after the 5 board members and Superintendent Jeff Pancione returned from a 32-minute closed session where they consulted by phone with the school system’s attorneys, Bowles and Rice.

The bleachers will remain closed until after an inspection that Pancione said was being organized by Maintenance and Safety Coordinator Steve Hott.

The impetus for the decision, Champ said, was a report in last week’s Hampshire Review that outlined areas where the bleachers don’t meet the standards set in 1990 by the Americans with Disabilities Act.

Lack of handrails, gaps that people could fall through and inadequate wheelchair seating are among the issues.

“I would like to get it to a place where it will be safer and more aesthetically pleasing,” said Hampshire Athletic Director Trey Stewart.

The board made no mention Monday night of the restrooms, which were included in last week’s Review report.

Eli (left) and Ethan Veach accept a $10,000 check from the Augusta Fire Company to help pay medical expenses for their father, Jeff.

Six weeks ago, Covid patient Jeff Veach couldn’t find voice to talk with family and was staring down the possibility of being on a ventilator the rest of his life.

Saturday, the Augusta volunteer firefighter, made it partway home, transferred from UVA Hospital in Charlottesville, Va., to Hampshire Memorial Hospital on Sunrise Summit.

Jeff was greeted at the hospital by friends and family carrying balloons and signs — and his colleagues from the Augusta Fire Company, who presented his sons a day earlier with a $10,000 check, the proceeds of a raffle they’re staging.

“We still have a lot more tickets to sell with all proceeds going to the family,” the company said on its Facebook page.

Veach contracted the virus in late January, suffering so badly that he was 1st on a ventilator at Winchester Medical Center and then transferred to UVA.

He continued to struggle there — off the ventilator at one point, then back on in May.

In early June his sister-in-law Christina Baker posted on Facebook that the outlook was grim, from an inability to speak clearly to pulmonary fibrosis in his lungs.

“Unless the Lord provides a miracle and restores Jeff’s lungs, Jeff will be on a ventilator the rest of his life,” she said.

Prayers are being answered.

This week, Bailey said, her father was sore and tired.

“When I visited him Sunday, he was really tired,” she said.

No timetable is set yet for getting him home to be with his wife, Tammy, who fought her own bout with Covid-19 just before Jeff tested positive.

“They’re trying to do the rehab and get him to walk again,” Bailey said.

Community support is helping, she said.

WINCHESTER — Valley Health told its employees and affiliated physicians Monday that the Covid-19 vaccine is now required. The order takes effect immediately and requires staff to be fully vaccinated by Nov. 1. More than 2,100 employees of the 6-hospital system remain unvaccinated.

“We believe requiring our staff to take this step to stop the spread of the virus is the most responsible course of action,” said Valley Health President and CEO Mark Nantz.

In all, Valley Health has 6,300 employees and affiliated doctors. The network said Monday that 65% are vaccinated, with that number rising daily.

The new rule requires anyone who is not yet vaccinated to receive the 1st shot by Oct. 1 and complete the 2-shot regimen by Nov. 1. Managers face a stricter deadline — the 1st dose by Aug. 16.

New employees must either already be vaccinated or complete the vaccination 14 days before starting, effective immediately.

Employees who claim religious or medical reasons for not being vaccinated can apply for an exemption that will be “carefully and confidentially” scrutinized, Valley Health said.

Those who do not meet the vaccination requirement can be suspended or terminated.

“Every patient, every community member and every employee must know that safety is our top priority,” Nantz said, “and when visiting any Valley Health facility they should feel confident we have done all we can to keep them safe.”