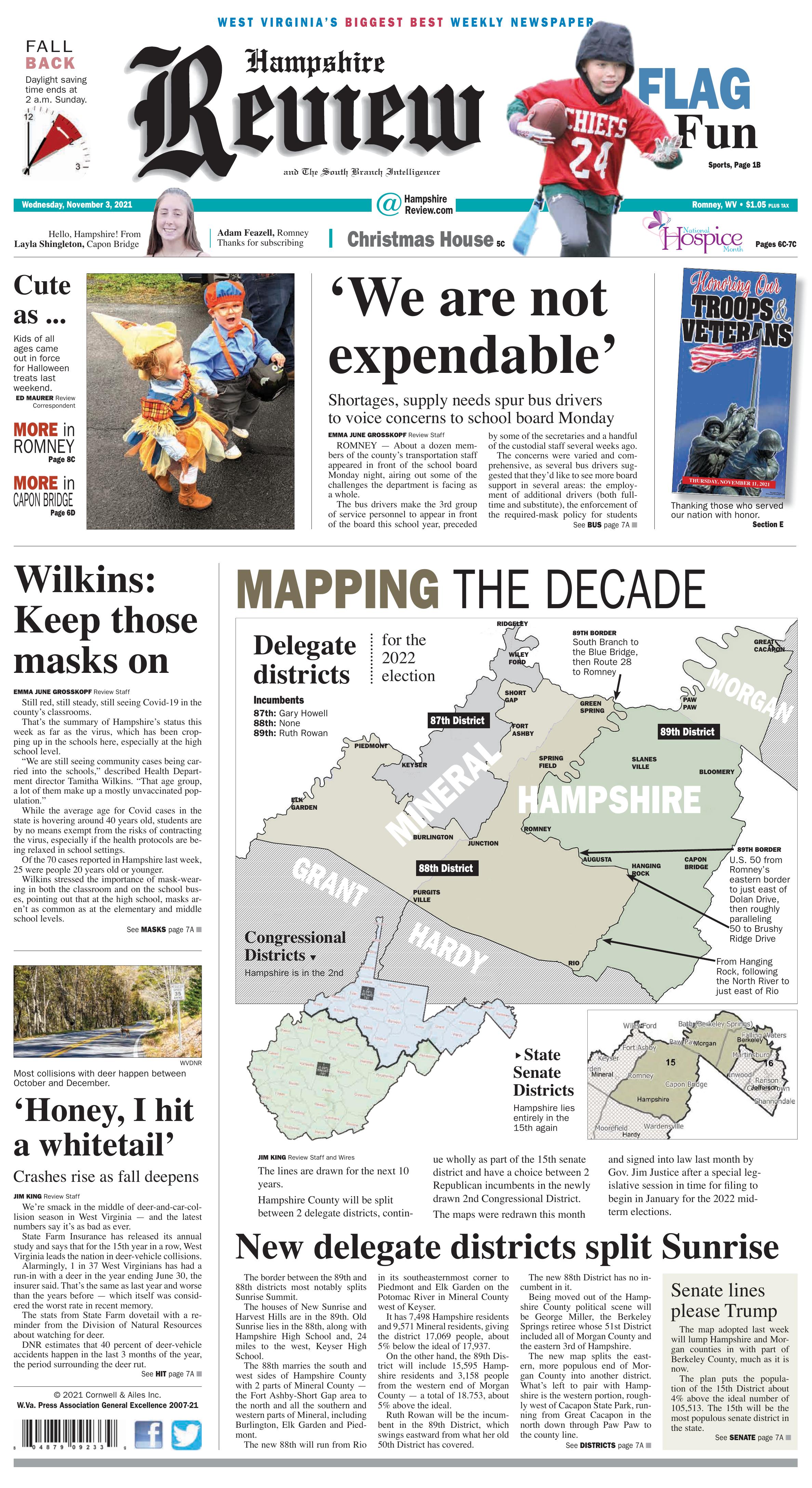 News
‘We are not expendable’

ROMNEY — About a dozen members of the county’s transportation staff appeared in front of the school board Monday night, airing out some of the challenges the department is facing as a whole.

The bus drivers make the 3rd group of service personnel to appear in front of the board this school year, preceded by some of the secretaries and a handful of the custodial staff several weeks ago.

The concerns were varied and comprehensive, as several bus drivers suggested that they’d like to see more board support in several areas: the employment of additional drivers (both full-time and substitute), the enforcement of the required-mask policy for students on buses and making sure proper equipment is supplied to each bus.

“We are not just ‘service personnel,’” said Dr. Georgia Whitacre, one of the drivers who spoke at Monday’s meeting. “We are professional bus drivers. We are not expendable.”

Jimmy See vocalized that transportation supervisor JW See has many, many duties, and that he believes the job is starting to wear on him.

“(JW) has enthusiasm and the spirit for this job, and a golden compassion,” Jimmy said. “He listens. He cares.”

While JW is the department’s supervisor, he has been behind the wheel of a bus for the majority of school days this year. On Monday, several members of his staff voiced their concerns about that fact.

“We personally feel that JW is an amazing guy, but, no offense, we see no backing from the board or the administration,” added driver Jenny Umstot. “He signed a contract to be a supervisor, not a bus driver.”

Umstot added that the county’s buses need to be properly equipped with items like vomit bags for when students are sick during the routes. Board President Debbie Champ assured the drivers that the board would look into it.

The mask requirement was also a worry for some of the drivers at Monday’s meeting. Driver Charlie Slater voiced that “rules should be followed” as far as students wearing masks on the buses.

Countywide, businesses are seeing staffing shortages, and in the schools, both the professional and the service personnel employees are strained. The bus drivers make the 3rd group of service employees to speak in front of the board, and the refrain is that the county simply doesn’t have enough people.

Because the drivers’ comments were made during the “appearance” portion of the board meeting, no real decisions or in-depth discussion was held surrounding their concerns.

However, Champ underlined that these concerns are countywide and statewide, and that any creative solutions to improve the staffing shortages, either on the service or professional side of things, would be greatly appreciated.

• Students across the county were recognized in the board’s “Catch a Kid Excelling” (CAKE) program. Sixteen students were honored Monday night as a part of this program.

• The HHS baseball team was approved to move forward in the preparations for their annual trip to Myrtle Beach. Coaches Chad VanMeter and Eric Hott explained the history of this trip to the board, and the board decided that, barring any severe Covid surges or cancellations, the trip could be a go.

• Superintendent Jeff Pancione and Curriculum Director Patty Lipps detailed the strategic plan and student progress in the county so far, highlighting the importance of administrators and schools being on the same page with their goal of student achievement.

News
Wilkins: Keep those masks on

That’s the summary of Hampshire’s status this week as far as the virus, which has been cropping up in the schools here, especially at the high school level.

“We are still seeing community cases being carried into the schools,” described Health Department director Tamitha Wilkins. “That age group, a lot of them make up a mostly unvaccinated population.”

While the average age for Covid cases in the state is hovering around 40 years old, students are by no means exempt from the risks of contracting the virus, especially if the health protocols are being relaxed in school settings.

Of the 70 cases reported in Hampshire last week, 25 were people 20 years old or younger.

Wilkins stressed the importance of mask-wearing in both the classroom and on the school buses, pointing out that at the high school, masks aren’t as common as at the elementary and middle school levels.

“Masks are not being worn consistently,” she observed. “We’ve done so well all year, since August, and we’ve been stern with our parents. Why stop now, at the worst time?”

As of right now, only 41.7 percent of Hampshire County’s population is fully vaccinated, and Wilkins said the Health Department’s main goal is to get folks the booster shot if they’re eligible.

“That’s our big push right now,” Wilkins said, adding that teachers and students are in the “institutionalized setting” category for vaccine eligibility, and can receive their booster if the timing all adds up.

You’re eligible for a Covid booster shot if you fall into one of the following categories: you’re 65 or older, you’re 18 or older and live in a long-term care setting, you are 18 or older and have an underlying medical condition, or you’re 18-plus and live or work in a high-risk or institutional setting (like a school).

If you fit into one of these categories, you are old eligible for the vaccine if it has been at least 6 months after receiving your 2nd dose of the Pfizer or Moderna vaccine (or, if you got the J&J vaccine, at least 2 months after your vaccine).

That means that students who were vaccinated in April or May are not yet eligible for the booster shot.

If you have any questions about your booster eligibility, or if you’d like to schedule a booster shot or begin your vaccination process, call the Health Department at 304-496-9640.

The border between the 89th and 88th districts most notably splits Sunrise Summit.

The houses of New Sunrise and Harvest Hills are in the 89th. Old Sunrise lies in the 88th, along with Hampshire High School and, 24 miles to the west, Keyser High School.

The 88th marries the south and west sides of Hampshire County with 2 parts of Mineral County — the Fort Ashby-Short Gap area to the north and all the southern and western parts of Mineral, including Burlington, Elk Garden and Piedmont.

The new 88th will run from Rio in its southeasternmost corner to Piedmont and Elk Garden on the Potomac River in Mineral County west of Keyser.

Ruth Rowan will be the incumbent in the 89th District, which swings eastward from what her old 50th District has covered.

The new 88th District has no incumbent in it.

Being moved out of the Hampshire County political scene will be George Miller, the Berkeley Springs retiree whose 51st District included all of Morgan County and the eastern 3rd of Hampshire.

The new map splits the eastern, more populous end of Morgan County into another district. What’s left to pair with Hampshire is the western portion, roughly west of Cacapon State Park, running from Great Cacapon in the north down through Paw Paw to the county line.

The new 88th District will have Green Spring, Springfield, Junction, Purgitsville, Kirby and Rio in it.

The delegate district numbers here, 88 and 89, are much higher than before because the state was divided differently this time for the election of 100 delegates.

For the last decade, and several others before that, some delegate districts elected multiple members, from 2 to 7.

This time around, each district will be represented by a single delegate, creating 100 districts.

Most collisions with deer happen between October and December.

We’re smack in the middle of deer-and-car-collision season in West Virginia — and the latest numbers say it’s as bad as ever.

State Farm Insurance has released its annual study and says that for the 15th year in a row, West Virginia leads the nation in deer-vehicle collisions.

Alarmingly, 1 in 37 West Virginians has had a run-in with a deer in the year ending June 30, the insurer said. That’s the same as last year and worse than the years before — which itself was considered the worst rate in recent memory.

The stats from State Farm dovetail with a reminder from the Division of Natural Resources about watching for deer.

DNR estimates that 40 percent of deer-vehicle accidents happen in the last 3 months of the year, the period surrounding the deer rut.

The abundance of deer, coupled with the state’s rugged terrain, makes for, well, accidents waiting to happen.

Once that deer has been hit, the damage costs more to repair, State Farm’s claims data shows. The average cost last year was over $4,500, AAA reports.

DNR has a list of reasons for the high accident rate, starting with deer species characteristics.

“West Virginia is fortunate to have an abundance of white-tailed deer,” understated Tyler Evans, wildlife biologist with the DNR Wildlife Resources Section, in a press release. “However, this abundance can magnify the issue of deer-vehicle collisions when combined with the deer breeding season which takes place in the fall.”

Evans noted that West Virginia’s rugged terrain also likely contributes to the collisions. The best deer habitat and mast are often found in valleys and bottomlands, he said, which, of course, is where most of the state’s roads run.

The mating season, or rut, increases deer activity and movement in late October and November, raising the likelihood of deer-vehicle collisions.

“Additionally, many hunters will take to the woods this fall,” Evans said. “Their presence may also influence movement of deer and may increase the likelihood of a deer-vehicle collision.”

By the way, State Farm says the other states in the top 5 of most-likely-to-collide-with-a-deer are, in order, Montana, Michigan, Pennsylvania and South Dakota.

To reduce the likelihood of colliding with a deer, DNR and State Farm urge motorists to observe the following driving tips: