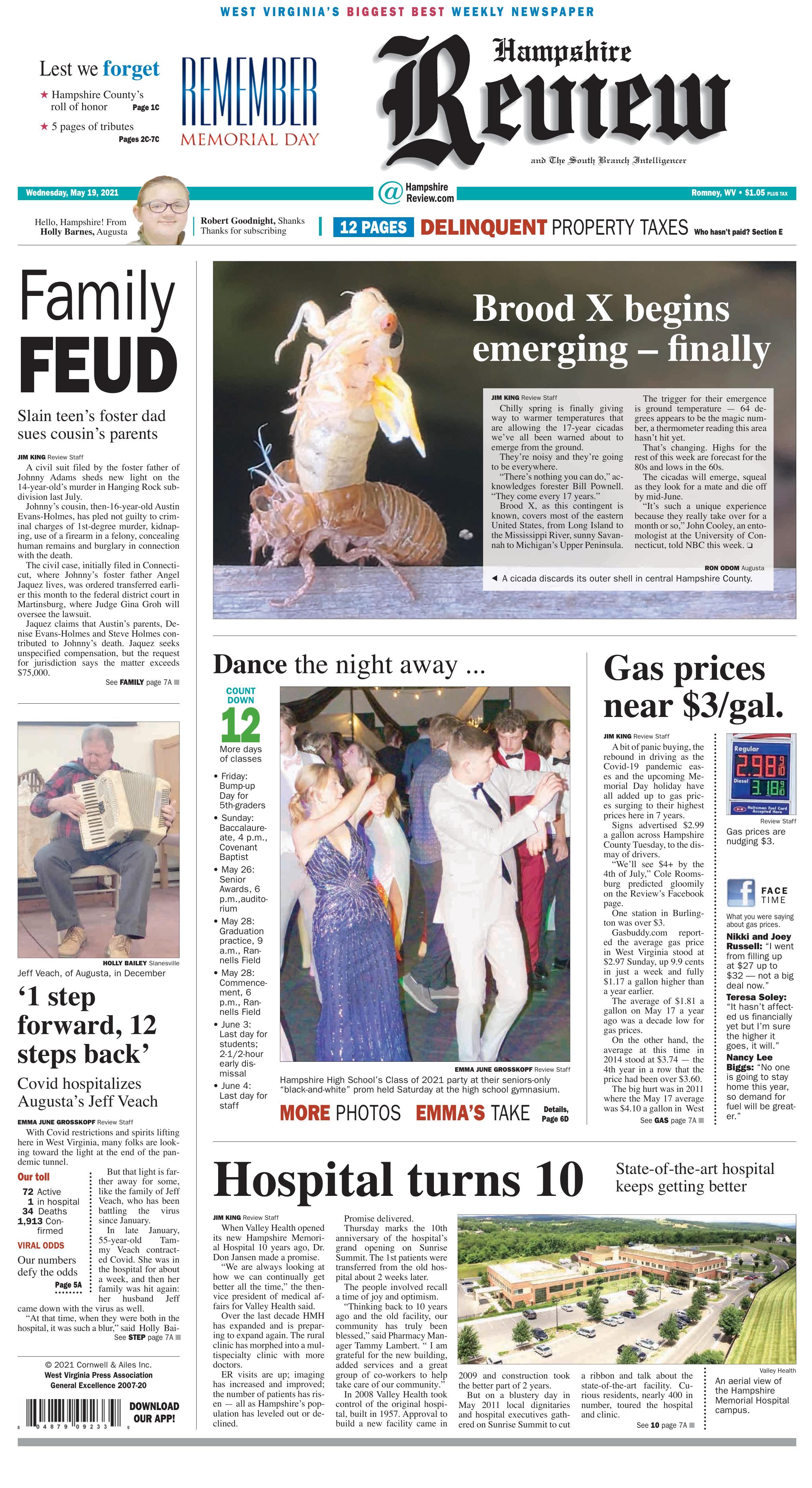 Johnny’s cousin, then-16-year-old Austin Evans-Holmes, has pled not guilty to criminal charges of 1st-degree murder, kidnaping, use of a firearm in a felony, concealing human remains and burglary in connection with the death.

The civil case, initially filed in Connecticut, where Johnny’s foster father Angel Jaquez lives, was ordered transferred earlier this month to the federal district court in Martinsburg, where Judge Gina Groh will oversee the lawsuit.

The civil complaint, filed about 3 weeks after Jaquez was named executor of Johnny’s estate, contends the Holmeses were negligent in their supervision of Austin and in allowing him access to a gun and ammunition.

Johnny disappeared late last July 11 and his remains were found a week later in a shallow grave under hard-to-reach brush on the Evans-Holmes property.

Jaquez’s suit says that Austin “brutally beat” Johnny before firing a single shot into his head.

He contends that young Evans-Holmes followed Johnny from the house where they were staying after Johnny confronted his older cousin about burglaries.

At the time that Johnny’s body was discovered, authorities said they had taken a teen relative — since identified as Austin Evans-Holmes — into custody on an unrelated burglary charge.

“They failed to properly monitor the acts and activities of their son,” The Jaquez lawsuit alleges. “They caused or otherwise allowed a firearm to be accessible.”

And finally, “They failed to protect Johnny and keep him safe,” the complaint says.

The Holmeses have asked to have the court extend their deadline for a response to June 14 after their motion to dismiss the case was denied.

Jeff Veach, of Augusta in December

With Covid restrictions and spirits lifting here in West Virginia, many folks are looking toward the light at the end of the pandemic tunnel.

But that light is farther away for some, like the family of Jeff Veach, who has been battling the virus since January.

In late January, 55-year-old Tammy Veach contracted Covid. She was in the hospital for about a week, and then her family was hit again: her husband Jeff came down with the virus as well.

“At that time, when they were both in the hospital, it was such a blur,” said Holly Bailey of Slanesville, Jeff and Tammy’s daughter. “Mom was on the ventilator for 6 days, and then they put Dad on a ventilator, too.”

Tammy was released form the hospital and is pretty much fully recovered at this point, save a bad day here and there, Holly said.

Jeff, though, is still fighting.

He was moved from Winchester to UVA in Charlottesville, which put him farther away from his family. This past weekend, Jeff was put back on the ventilator after being off of it, Holly said, but the doctors are seeing improvement.

“Before he was back on the vent, he was whispering and trying to mouth words,” she described. “They say he’s doing most of the work himself, so it’s mainly just the oxygen.”

She described her dad’s journey so far as being a “whirlwind.”

Last month, Jeff developed sepsis from a bedsore on his back, and Holly said the doctors have cited the infection as an additional hurdle in her dad’s recovery.

She said she’s been trying to stay positive, and is leaning into the power of prayer.

“We just thank the good Lord above,” she said. “Without Him, (Dad) wouldn’t be functioning. I believe that it’s through the power of prayer that he’s at where he is now.”

There have been small improvements along the way, Holly said, and even though Jeff is at UVA (nearly 3 hours from here), she, her mom and her aunt Lisa take turns seeing him every weekend.

“At first, we were only allowed to visit for an hour,” Holly recalled. “Since he’s been moved to NICU, they let us stay a little longer.”

Holly said that earlier on, when she visited her dad she had to dress head-to-toe in protective gear.

“I don’t think he could recognize me,” she said of the experience.

The journey has been an emotional one for Holly and her family, and she said when her dad initially contracted the virus, he said he didn’t want to be a “burden.”

“My dad’s the kind of guy who would give the shirt off his back for you,” she explained. “He’s always been like that.”

She said that since her parents got sick a few months ago, the community support has been wonderful.

“I’ve never realized what a great community we do have,” she said with a smile. She recounted that when she was younger, her dad had a kidney transplant, and she remembered the community coming out in full force with a benefit dinner for him.

“I was young then, but it really was a lot,” she remembered. “And now that I’m older, I can see that people care, still.”

With more and more folks in the Mountain State getting vaccinated, Covid restrictions are lifting, but the Veach family are still recovering and fighting the virus.

Holly said that her mother had no underlying health issues, and barring her dad’s kidney transplant, both Jeff and Tammy were in their mid-50s and in good health.

Right now, she said she’s hoping her dad gets moved back to Winchester to be closer to his home in Augusta.

“When this all started, we knew it was a real thing,” Holly said. “But until it happens to one of your loved ones, it’s a whole different thing.”

Gas prices are nudging $3 a gallon in Hampshire County this week.

A bit of panic buying, the rebound in driving as the Covid-19 pandemic eases and the upcoming Memorial Day holiday have all added up to gas prices surging to their highest prices here in 7 years.

Signs advertised $2.99 a gallon across Hampshire County Tuesday, to the dismay of drivers.

“We’ll see $4+ by the 4th of July,” Cole Roomsburg predicted gloomily on the Review’s Facebook page.

One station in Burlington was over $3.

Gasbuddy.com reported the average gas price in West Virginia stood at $2.97 Sunday, up 9.9 cents in just a week and fully $1.17 a gallon higher than a year earlier.

“It always goes up in the summer due to vacationing,” Lisa Boward reminded Facebook readers. “It's  something everyone expects and should plan for when making vacation plans.”

Prices do usually rise as Memorial Day approaches. Part of the reason is a change by refineries to a summer blend of gas required in many states.

But part is the increasing demand for gas as we travel more in the summer — an increase spurred this year as more people venture out from home as Covid-19 conditions improve.

Prices in neighboring Virginia skyrocketed — and supplies became scarce — after computer pirates demanded (and got) $5 million in ransom to unlock the software that guides the Colonial pipeline that serves southeastern states.

The most noticeable affect in Hampshire County was the temporary shutdown at Omps Grocery in Bloomery, near the state line, for a few hours last Tuesday, and long lines at gas pumps elsewhere as people topped off their tanks.

“We are currently out of regular gas with only a few hundred gallons of Super gas,” Omps posted early May 11.

The pipeline started back up late last week, but supplies were still scarce Monday. The District of Columbia reported that 80 percent of service stations there were dry.

“With the pipeline now back in service, I expect prices to come down in the hardest hit states,” said Patrick De Haan, head of petroleum analysis for GasBuddy.

What you were saying about gas prices. For all the comments, check the Review Facebook page.

An aerial view of the Hampshire Memorial Hospital campus.

“We are always looking at how we can continually get better all the time,” the then-vice president of medical affairs for Valley Health said.

Over the last decade HMH has expanded and is preparing to expand again. The rural clinic has morphed into a multispecialty clinic with more doctors.

ER visits are up; imaging has increased and improved; the number of patients has risen — all as Hampshire’s population has leveled out or declined.

Thursday marks the 10th anniversary of the hospital’s grand opening on Sunrise Boulevard. The 1st patients were transferred from the old hospital a little over 2 weeks later.

The people involved recall a time of joy and optimism.

“Thinking back to 10 years ago and the old facility, our community has truly been blessed,” said Pharmacy Manager Tammy Lambert. “ I am grateful for the new building, added services and a great group of co-workers to help take care of our community.”

In 2008 Valley Health took control of the original hospital, built in 1957. Approval to build a new facility came in 2009 and construction took the better part of 2 years.

But on a blustery day in May 2011 local dignitaries and hospital executives gathered on Sunrise Summit to cut a ribbon and talk about the state-of-the-art facility. Curious residents, nearly 400 in number, toured the hospital and clinic.

“What a great day,” said Walt Layman, chairman of the HMH board of trustees.

“A dream remains a dream unless someone comes forward to make it a reality,” said Mark Merrill, the president and CEO of Valley Health who retired last year. “You should be proud.”

Steve Haines of Shanks said the new facility lived up to everything he had heard about it.

That included a 32-slice MRI imager, since upgraded to 64 slices. A 6-bay emergency department has added 2 bays.

It was licensed for 14 hospital beds and another 30 long-term care beds.

An FAA-certified helipad sits outside.

In keeping with Dr. Jansen’s commitment from a decade ago, current HMH President Tom Kluge noted the hospital is expanding again and looking toward a bright future.

Construction has begun on a $4 million upgrade that will expand the emergency room and imaging lab again and build out unfinished space to add additional clinical services.

The goal, he said, is simple.

Primary care — internal medicine and family practice — along with specialty services can be delivered at HMH instead of sending patients to Valley Health’s anchor hospital in Winchester.

“We want to take care of them locally,” Kluge said. “We do wonderful work with that on the inpatient side. We have a strong hospitalist group and emergency department team.”

“It has been a pleasure working at Hampshire Memorial Hospital for the past 10 years and knowing that we are part of an organization that is committed to providing quality healthcare to our local community,” she said.