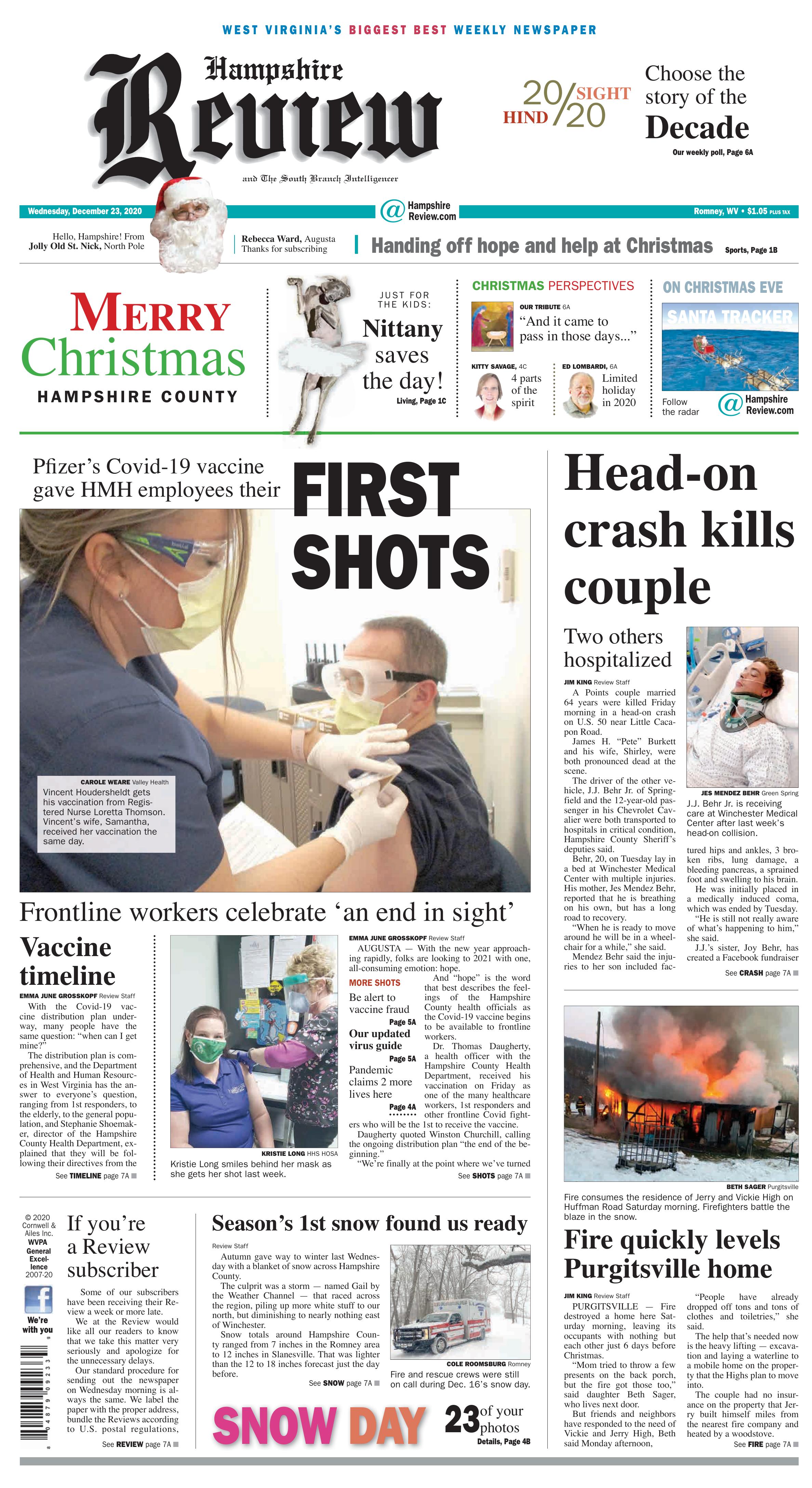 With the Covid-19 vaccine distribution plan underway, many people have the same question: “when can I get mine?”

The distribution plan is comprehensive, and the Department of Health and Human Resources in West Virginia has the answer to everyone’s question, ranging from 1st responders, to the elderly, to the general population, and Stephanie Shoemaker, director of the Hampshire County Health Department, explained that they will be following their directives from the state.

“We’re getting a lot of ‘when can I be on the waiting list,’” Shoemaker revealed. “We have to follow the priority list laid out for us.”

Gov. Jim Justice announced on Sunday that the Mountain State is leading the nation with their rate of Covid vaccination, with the administration of 15,046 doses out of 16,575 doses received of the Pfizer vaccine, making it almost a 91 percent administration rate.

He said the state was “shining” because of the rate at which nursing home residents and staff, specifically, were being vaccinated.

The information on the Covid vaccination timeline, published by the DHHR, describes a 2-phase plan with several sub-phases:

While it’s not quite as simple as a 2-step plan, the distribution has begun and is underway. Shoemaker said Hampshire County is currently in Phase 1-A but is working toward 1-B.

The vaccine should be available to the general public by March at the earliest. o

News
If you’re a Review subscriber

Some of our subscribers have been receiving their Review a week or more late.

We at the Review would like all our readers to know that we take this matter very seriously and apologize for the unnecessary delays.

Our standard procedure for sending out the newspaper on Wednesday morning is always the same. We label the paper with the proper address, bundle the Reviews according to U.S. postal regulations, pay our postage bill and enter them into the mail in Romney. We even contract with a company that specializes in meeting postal regulations in order to make sure we are doing this work correctly.

Postal Service procedures now dictate that all of our newspapers first go to Baltimore, Md., for sorting —even if they are coming right back to Romney for delivery to addresses here. For papers outside the county, the route through Baltimore may lead to another sorting center before being distributed by the post office to the various addresses.

Frankly, we have little or no control over the timeliness of the delivery of our newspapers once they leave our hands. Just like our readers who send out personal letters, unfortunately delays are a way of life any more.

The Postal Service doesn’t share much information on its operations, but we would like to point out that the giant agency is facing the same staffing issues all businesses face in this time of Covid-19. And don’t forget it’s the busiest mail season, Christmas.

That’s not to say we don’t want the delivery to be speedier.

We do, and we’ll continue to work with the post office to see that speedy delivery is as much a priority for that organization as it is for ours.

Again, we apologize for the delays, and we can assure you, our readers, that we are continuing to take this problem very seriously.

Firefighters battle the blaze in the snow.

PURGITSVILLE — Fire destroyed a home here Saturday morning, leaving its occupants with nothing but each other just 6 days before Christmas.

“Mom tried to throw a few presents on the back porch, but the fire got those too,” said daughter Beth Sager, who lives next door.

But friends and neighbors have responded to the need of Vickie and Jerry High, Beth said Monday afternoon,

“People have already dropped off tons and tons of clothes and toiletries,” she said.

The help that’s needed now is the heavy lifting — excavation and laying a waterline to a mobile home on the property that the Highs plan to move into.

The couple had no insurance on the property that Jerry built himself miles from the nearest fire company and heated by a woodstove.

“They couldn’t get anyone to insure them,” Beth said.

The fire began before 7 a.m. Saturday with just Jerry and Vickie at home. Vickie called next door to Beth and her husband, Adam, right away.

“By the time we got there the fire was already through the roof to the left of the chimney,” Beth said, “and we weren’t there long and it was just engulfed.”

The structure was destroyed within 30 minutes. The origin is suspected to be a flue fire, but that hasn’t been confirmed.

Fire crews from Romney, Springfield, Moorefield and Burlington responded. Tankers were brought in from Mathias-Baker, New Creek and Petersburg to help.

“There” is Huffman Road, which runs west off U.S. 220 just south of the Purgitsville Post Office. Huffman runs along Elmlick Run to Mountain View Road in Hardy County.

Fire and rescue crews were still on call during the day of snow Dec. 16.

Autumn gave way to winter last Wednesday with a blanket of snow across Hampshire County.

The culprit was a storm — named Gail by the Weather Channel — that raced across the region, piling up more white stuff to our north, but diminishing to nearly nothing east of Winchester.

Snow totals around Hampshire County ranged from 7 inches in the Romney area to 12 inches in Slanesville. That was lighter than the 12 to 18 inches forecast just the day before.

Dec. 16 would have been a snow day in other years, but the Covid-19 pandemic has taught the school system new lessons. It was, instead, just another remote instruction day with students and teachers alike working from home.

Neighboring Mineral County and nearby Jefferson County made national newscasts with their decision to give students and teachers the day off, saying everyone deserves a snow day once in a while.

Damage here was minimal, but delight was rampant. An accident just before 1 p.m. drew fire and rescue crews from Romney and Burlington to the Purgitsville Pike.

U.S. 50 atop Cooper Mountain was briefly shut down around 3 p.m. by the blowing snow.

Residents used the season’s first snow as an excuse to frolick, building snowmen, making snow angels and all the usual. More than 200 people submitted snow photos to the Review either through email or our Facebook page.

A couple from Points were killed this morning (Friday, Dec. 18) in a head-on crash on U.S. 50 near Little Cacapon Road.

James H. Burkett and his wife, Shirley, were both pronounced dead at the scene.

The driver of the other vehicle, Jeremiah Behr Jr. of Springfield and a 12-year-old passenger in his Chevrolet Cavalier were both listed in critical condition this afternoon, Hampshire County Sheriff’s deputies said.

Authorities said the accident occurred about 10:05 a.m. when Behr’s westbound Cavalier apparently crossed the centerline and hit the Burketts’ Ford Focus head on.

Police said the accident might have been the result of Behr sliding out of control because his car’s tires were bald.

Behr and the 12-year-old were originally taken to Hampshire Memorial Hospital before being transported elsewhere for treatment.

The accident and investigation shut down U.S. 50 for a couple of hours.

Deputy Austin Shockey and Sgt. Norman Launi were first on the scene for the Hampshire County Sheriff’s Office.

Fire and rescue squads from Romney and Augusta and the county ambulance service all responded to the call.