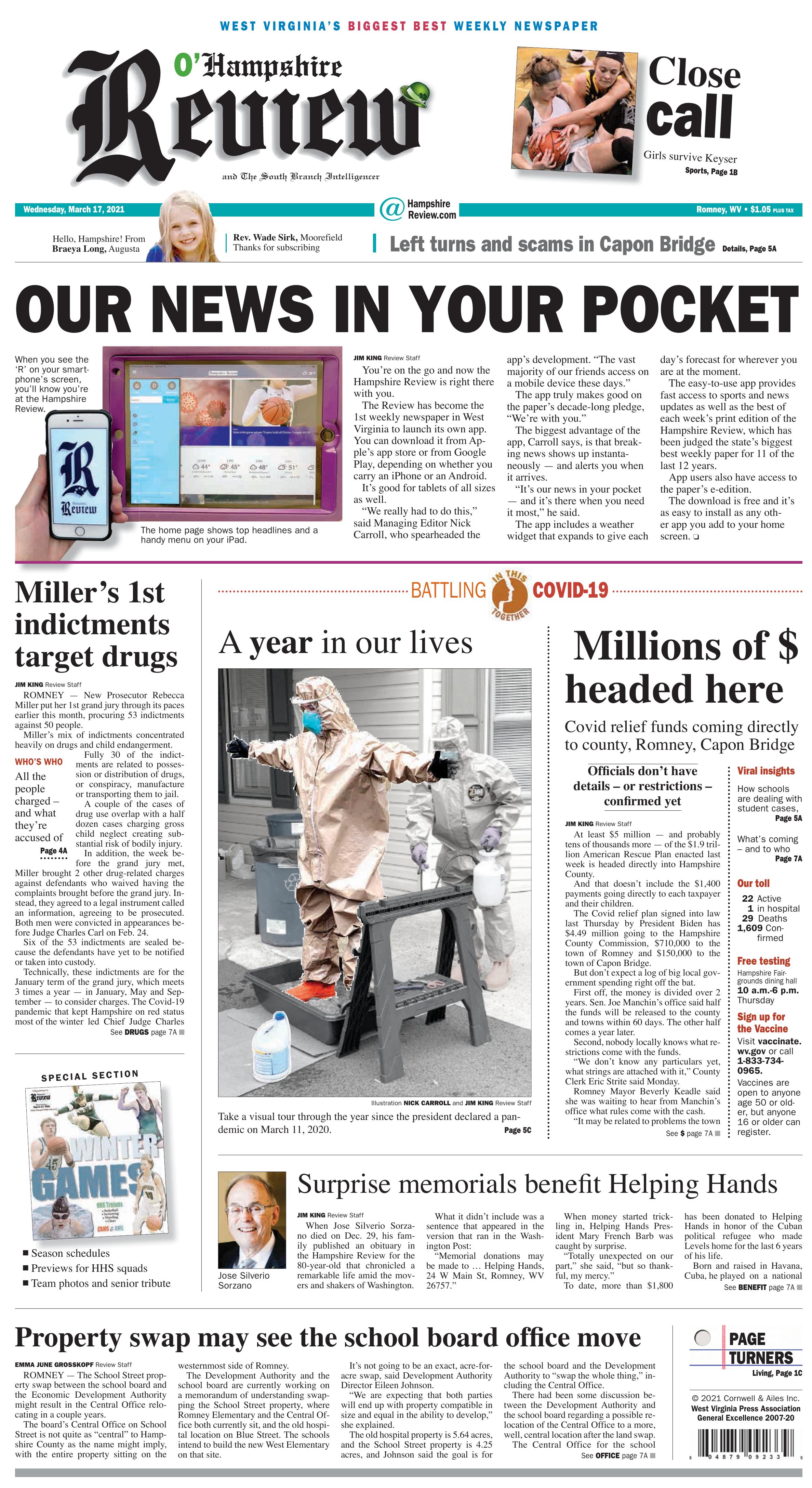 Fully 30 of the indictments are related to possession or distribution of drugs, or conspiracy, manufacture or transporting them to jail.

A couple of the cases of drug use overlap with a half dozen cases charging gross child neglect creating substantial risk of bodily injury.

In addition, the week before the grand jury met, Miller brought 2 other drug-related charges against defendants who waived having the complaints brought before the grand jury. Instead, they agreed to a legal instrument called an information, agreeing to be prosecuted. Both men were convicted in appearances before Judge Charles Carl on Feb. 24.

Six of the 53 indictments are sealed because the defendants have yet to be notified or taken into custody.

Technically, these indictments are for the January term of the grand jury, which meets 3 times a year — in January, May and September — to consider charges. The Covid-19 pandemic that kept Hampshire on red status most of the winter led Chief Judge Charles Carl to delay convening the jury until March 4. Miller said she expects the May term to convene on time unless virus conditions deteriorate.

That puts a bit of pressure on Miller’s staff and the courts to move the 53 indictments along quickly.

Of course, James only took office the day before the January 2013 grand jury met. Plumer was appointed to replace James in September 2017, so she had 3-and-a-half months to prepare her 1st slate of indictments.

A convicted felon with 25 weapons in his possession was indicted by a Hampshire County grand jury earlier this month.

Officials don’t have details – or restrictions – confirmed yet

And that doesn’t include the $1,400 payments going directly to each taxpayer and their children.

The Covid relief plan signed into law last Thursday by President Biden has $4.49 million going to the Hampshire County Commission, $710,000 to the town of Romney and $150,000 to Capon Bridge.

But don’t expect a log of big local government spending right off the bat.

First off, the money is divided over 2 years. Sen. Joe Manchin’s office said half the funds will be released to the county and towns within 60 days. The other half comes a year later.

Second, nobody locally knows what restrictions come with the funds.

“We don’t know any particulars yet, what strings are attached with it,” County Clerk Eric Strite said Monday.

Romney Mayor Beverly Keadle said she was waiting to hear from Manchin’s office what rules come with the cash.

“It may be related to problems the town government has faced because of Covid,” Keadle said. “We just don’t know yet.”

Manchin gave some indication on Friday. He said local officials can use funding to pay expenses related to the pandemic, including covering lost revenue and investments in water, sewer and broadband infrastructure.

Another factor giving the county and towns restraint: they’re all in the middle of preparing their budgets for the fiscal year that begins July 1. Essentially, they’re all planning to live on the funds they know they have in hand — property taxes, fees, state and federal aid, and grants that are already in place.

“I’m acting like we don’t even have it,” Keadle said of her budget preparations for Romney.

Still, the funds could make a big difference.

The $2.25 million that Hampshire County would see this year is more than a 3rd of the commission’s annual budget, which totaled just shy of $6 million this year.

In addition to the direct payments to the commission and towns, money will flow to the schools, the Committee on Aging and the Potomac Valley Transit Authority.

But those funds are all funneled 1st to their state oversight agencies, which will in turn allocate to individual agencies.

“I don’t know how much we might be getting,” said Julie Linger, who heads the Hampshire County Committee on Aging.

“We’re only on round 2 of Covid relief and we don’t have that money yet,” she said Monday.

The State Department of Education requires the county to apply for the funds and has, so far, required that the expenses be related to dealing with the pandemic.

“I’m going to guess that if we are going to get any more, it’s going through a similar process.”

Manchin told West Virginia officials last Friday that the new federal stimulus package will include $677 million in funding to local governments in the state.

The money is broken up into $176 million for metropolitan cities, $153 million for smaller cities and $348 million for the state's 55 counties.

“For the 1st time in as long as I can remember, local governments have the flexibility to use these funds to fix and upgrade sewer, water and broadband infrastructure without all of the bureaucratic red tape,” Manchin said.

When Jose Silverio Sorzano died on Dec. 29, his family published an obituary in the Hampshire Review for the 80-year-old that chronicled a remarkable life amid the movers and shakers of Washington.

What it didn’t include was a sentence that appeared in the version that ran in the Washington Post:

“Totally unexpected on our part,” she said, “but so thankful, my mercy.”

To date, more than $1,800 has been donated to Helping Hands in honor of the Cuban political refugee who made Levels home for the last 6 years of his life.

Born and raised in Havana, Cuba, he played on a national championship basketball team before fleeing the communist takeover in 1960.

The 20-year-old landed in Arlington, Va., with his sneakers and a job mopping floors in a hotel kitchen, where he could learn English and eat for free.

He earned a bachelor’s and then a Ph.D. in political philosophy from Georgetown University, where he taught political theory for 18 years.

Sorzano entered public service as the Peace Corps director for Colombia, a stint that culminated with him negotiating the release of a kidnaped volunteer.

He declined an ambassadorship from President Reagan because he didn’t want to leave the country, so he became the U.S. Permanent Deputy to the United Nations for 5 years, leaving the post to become an advisor on Latin American affairs for Reagan’s National Security Council.

Retirement drew him to the mountains, where he and his bride of 50-plus years discovered Levels.

“Jose fell head over heels in love – with the beauty, the wildlife, the peace, the peaches and apples, the people, in short, everything,” his obituary said.

Apparently “everything” included the spirit of Helping Hands, the longtime thrift store that also loans out medical supplies. The charity has funneled tens of thousands of dollars into the community.

The memorials for Sorzano will do the same.

“It will go back into the community,” Barb said. “It’s been very interesting, it really has.”

News
Property swap may see the school board office move

ROMNEY — The School Street property swap between the school board and the Economic Development Authority might result in the Central Office relocating in a couple years.

The board’s Central Office on School Street is not quite as “central” to Hampshire County as the name might imply, with the entire property sitting on the westernmost side of Romney.

The Development Authority and the school board are currently working on a memorandum of understanding swapping the School Street property, where Romney Elementary and the Central Office both currently sit, and the old hospital location on Blue Street. The schools intend to build the new West Elementary on that site.

“We are expecting that both parties will end up with property compatible in size and equal in the ability to develop,” she explained.

The old hospital property is 5.64 acres, and the School Street property is 4.25 acres, and Johnson said the goal is for the school board and the Development Authority to “swap the whole thing,” including the Central Office.

There had been some discussion between the Development Authority and the school board regarding a possible relocation of the Central Office to a more, well, central location after the land swap.

The Central Office for the school board doesn’t have to be in the county seat, which opens up other opportunities for potential spots further east.

“It does make sense,” Johnson added. “If (the board is) able to relocate to a site more central to the county, it makes sense.”

School board president Debbie Champ affirmed that there is a possibility down the line for the Central Office to move east.

“In the longer term big picture, that is being discussed,” she commented.

Johnson said it will probably be 2 years or so before the Development Authority would have actual access to the School Street property, so the possible relocation is definitely a few years into the future. With movement underway to make the old hospital site usable for the board’s future construction of the West Elementary School, the little pieces are starting to come together.

“For the larger project as a whole, I see that as an economic recruitment tool,” Johnson said hopefully. “People who move here, they want to know what the systems are like, the healthcare system, the school system. I’m happy the Development Authority can be a part of this project in the community.”