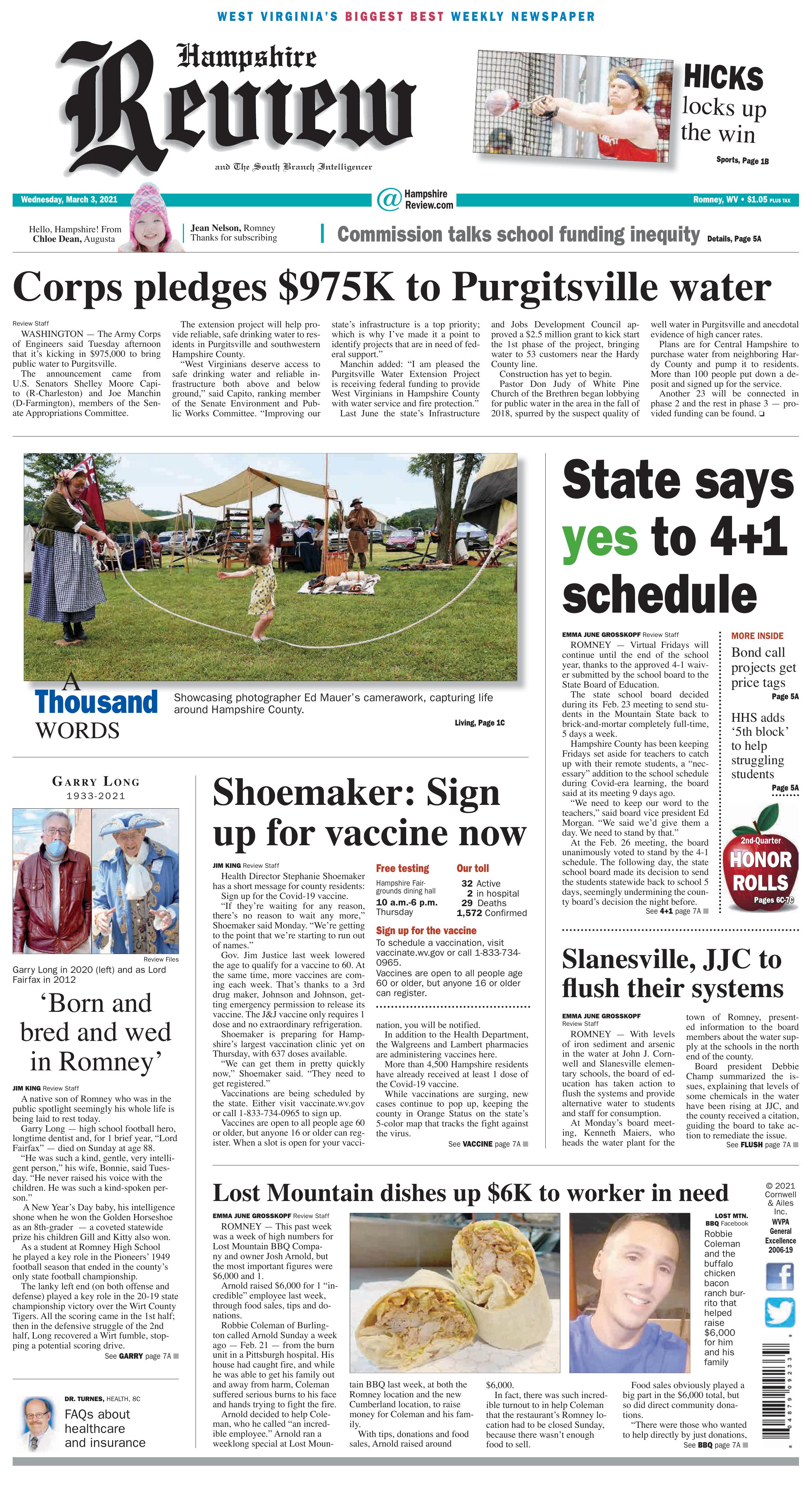 “If they’re waiting for any reason, there’s no reason to wait any more,” Shoemaker said Monday. “We’re getting to the point that we’re starting to run out of names.”

Gov. Jim Justice last week lowered the age to qualify for a vaccine to 60. At the same time, more vaccines are coming each week. That’s thanks to a 3rd drug maker, Johnson and Johnson, getting emergency permission to release its vaccine. The J&J vaccine only requires 1 dose and no extraordinary refrigeration.

Shoemaker is preparing for Hampshire’s largest vaccination clinic yet on Thursday, with 637 doses available.

“We can get them in pretty quickly now,” Shoemaker said. “They need to get registered.”

All vaccinations are being scheduled by the state. Either visit vaccinate.wv.gov or call 1-833-734-0965 to sign up.

Vaccines are open to all people age 60 or older, but anyone 16 or older can register. When a slot is open for your vaccination, you will be notified.

In addition to the Health Department, the Walgreens and Lambert pharmacies are administering vaccines here.

More than 4,500 Hampshire residents have already received at least 1 dose of the Covid-19 vaccine.

While vaccinations are surging, new cases continue to pop up, keeping the county in Orange Status on the state’s 5-color map that tracks the fight against the virus.

And another Hampshire resident lost the battle against the disease. The Health Department announced Monday night that a 58-year-old man from Augusta had died, the county’s 29th fatality from Covid-19.

Since the pandemic gripped the county nearly a year ago, 1,572 residents have tested positive for the virus.

ROMNEY — Virtual Fridays will continue until the end of the school year, thanks to the approved 4-1 waiver submitted by the school board to the State Board of Education.

The state school board decided during its  Feb. 23 meeting to send students in the Mountain State back to brick-and-mortar completely full-time, 5 days a week.

Hampshire County has been keeping Fridays set aside for teachers to catch up with their remote students, a “necessary” addition to the school schedule during Covid-era learning, the board said at its meeting 9 days ago.

“We need to keep our word to the teachers,” said board vice president Ed Morgan. “We said we’d give them a day. We need to stand by that.”

At the Feb. 26 meeting, the board unanimously voted to stand by the 4-1 schedule. The following day, the state school board made its decision to send the students statewide back to school 5 days, seemingly undermining the county board’s decision the night before.

However, in their official motion, the state board gave counties like Hampshire an option: fill out a waiver and send it to the state to be approved for a blended schedule.

“Counties that are utilizing classroom teachers to teach both in-person students and full-time students participating in locally designed virtual programs may submit a waiver request to the State Superintendent to request the ability to conduct in-person instruction 4 days per week to allow sufficient time to support full-time virtual students,” the official motion read.

At this Monday night’s board meeting, Superintendent Jeff Pancione revealed that Clayton Burch State superintendent, approved Hampshire County’s waiver Monday afternoon, allowing the county to continue with the 4-1 schedule as planned for the remainder of the school year.

A native son of Romney who was in the public spotlight seemingly his whole life is being laid to rest today.

A New Year’s Day baby, his intelligence shone when he won the Golden Horseshoe as an 8th-grader  — a coveted statewide prize his children Gill and Kitty also won.

As a student at Romney High School he played a key role in the Pioneers’ 1949 football season that ended in the county’s only state football championship.

The lanky left end (on both offense and defense) played a key role in the 20-19 state championship victory over the Wirt County Tigers. All the scoring came in the 1st half; then in the defensive struggle of the 2nd half, Long recovered a Wirt fumble, stopping a potential scoring drive.

Despite that glory, the game Long said last year that he remembered most from the 9-1 season was the Thanksgiving Day loss to rival Keyser.

“… We could have beaten those guys. We just had a bad day,” he said.

After high school, Garry Long earned a degree at WVU and then the Baltimore College of Dentistry in 1958. He began his career in the U.S. Army, but he ended up back in Romney.

“I think he had taken Maryland boards, and maybe Virginia boards,” Bonnie recalled, “but I knew he was going to come back to West Virginia — and I knew he wasn’t going to go over those mountains (to Morgantown).”

“He was a Romney boy, born and bred and wed in Romney.”

His dental career spanned 50 years and his place in Romney was one of prominence, an elder in Romney Presbyterian Church, resident of a home on North High Street that is on the National Register of Historic Places, and in 2012 designated as Lord Fairfax to oversee Romney’s 250th birthday celebration as the oldest town in West Virginia, alongside Lady Fairfax, his wife Bonnie, although, Bonnie admits with a laugh, “People didn’t realize Lord Fairfax was never married.”

ROMNEY — With levels of iron sediment and arsenic in the water at John J. Cornwell and Slanesville elementary schools, the board of education has taken action to flush the systems and provide alternative water to students and staff for consumption.

At Monday’s board meeting, Kenneth Maiers, who heads the water plant for the town of Romney, presented information to the board members about the water supply at the schools in the north end of the county.

Board president Debbie Champ summarized the issues, explaining that levels of some chemicals in the water have been rising at JJC, and the county received a citation, guiding the board to take action to remediate the issue.

“For right now, the students (at JJC) have been given bottled water as well as water to cook with out there, so there will be no one consuming it,” she assured. “We are also going to be testing the water out there now on a weekly basis instead of a quarterly basis until the levels come back down. We’re going to flush the system out there.”

Champ added that they would be replacing some of the filters immediately to extract arsenic in the water to make it safe for consumption again.

At Slanesville, there’s an issue with iron sediment in the water. Champ said they’ve been working with D&D Plumbing in Romney to get some estimates and replace the system’s filters.

With new filters at Slanesville, the iron issues should be eradicated.

“The water out there has been tested and deemed completely safe for consumption,” Champ noted. “However, we are providing alternative water supply for both cooking and student consumption, because it is pretty nasty looking.”

Because folks haven’t really been in the school buildings, the use of the water through these 2 schools has been “dramatically lower than normal,” Champ explained, so the water has been sitting in the wells.

“Flushing them is the 1st step to resolving the issue,” she continued. “With our students being back, it should resolve itself as usage comes back up.”

The buffalo chicken bacon ranch burrito, a part of the restaurant’s special to raise money for Coleman

ROMNEY — This past week was a week of high numbers for Lost Mountain BBQ Company and owner Josh Arnold, but the most important figures were $6,000 and 1.

Robbie Coleman of Burlington called Arnold Sunday a week ago — Feb. 21 — from the burn unit in a Pittsburgh hospital. His house had caught fire, and while he was able to get his family out and away from harm, Coleman suffered serious burns to his face and hands trying to fight the fire.

Arnold decided to help Coleman, who he called “an incredible employee.” Arnold ran a weeklong special at Lost Mountain BBQ last week, at both the Romney location and the new Cumberland location, to raise money for Coleman and his family.

With tips, donations and food sales, Arnold raised around $6,000.

In fact, there was such incredible turnout to in help Coleman that the restaurant’s Romney location had to be closed Sunday, because there wasn’t enough food to sell.

Food sales obviously played a big part in the $6,000 total, but so did direct community donations.

On Sunday, Arnold said his Romney employees needed a breather.

“Sales this week in Romney were the highest we’ve had since October,” Arnold remarked. “We didn’t have enough in Romney to open, but just enough in Cumberland to get through most of the day. On top of supplying (the Cumberland location), they needed a break for sure.”

Coleman said he’s doing OK, and while his family is adjusting to the drastic and sudden change, they’re all together.

“That’s what really matters,” he said.

Coleman also added that it feels awesome to have the community support during this tough time for his family and that he’s itching to get back to work.

“It feels amazing knowing that the people I work with, and also in my community, can care and help you when things in your life are falling apart and pick you back up again,” Coleman expressed. “Hopefully, one day I can do the same for some of them.”

WASHINGTON — The Army Corps of Engineers said Tuesday afternoon that it’s kicking in $975,000 to bring public water to Purgitsville.

“West Virginians deserve access to safe drinking water and reliable infrastructure both above and below ground,” said Capito, ranking member of the Senate Environment and Public Works Committee. “Improving our state’s infrastructure is a top priority; which is why I’ve made it a point to identify projects that are in need of federal support.”

Last June the state’s Infrastructure and Jobs Development Council approved a $2.5 million grant to kick start the 1st phase of the project, bringing water to 53 customers near the Hardy County line.

Construction has yet to begin.

Pastor Don Judy of White Pine Church of the Brethren began lobbying for public water in the area in the fall of 2018, spurred by the suspect quality of well water in Purgitsville and anecdotal evidence of high cancer rates.

After the County Commission refused to pay for testing of water, Judy found private donations to test samples that ignited state and federal officials to begin searching for ways to put the area on a public water system.

Plans are for Central Hampshire to purchase water from neighboring Hardy County and pump it to residents. More than 100 people put down a deposit and signed up for the service.

Another 23 will be connected in phase 2 and the rest in phase 3 — provided funding can be found to complete those phases.