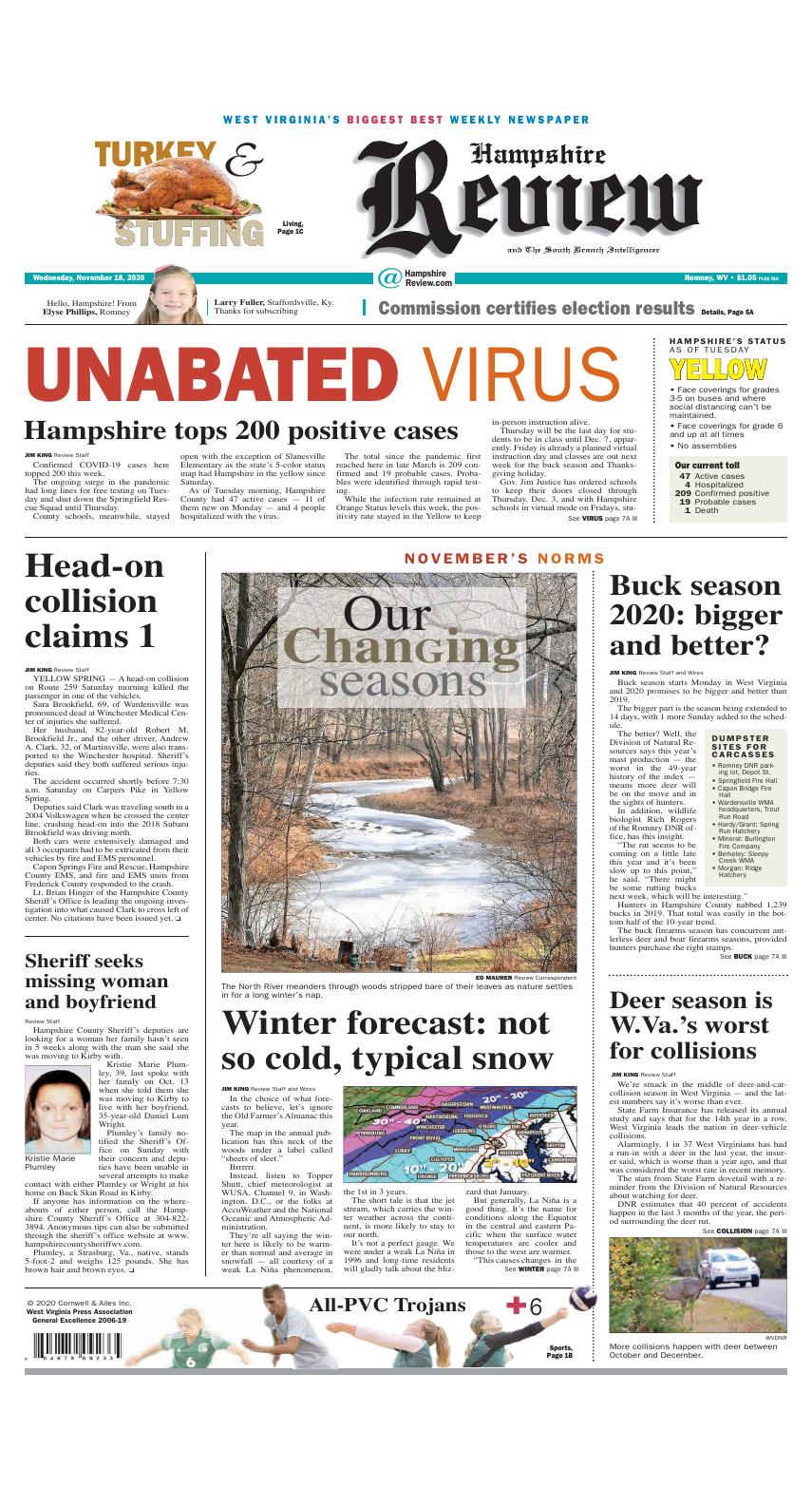 The ongoing surge in the pandemic had long lines for free testing on Tuesday and shut down the Springfield Rescue Squad until Thursday.

County schools, meanwhile, stayed open with the exception of Slanesville Elementary as the state’s 5-color status map had Hampshire in the yellow since Saturday.

As of Tuesday morning, Hampshire County had 47 active cases — 9 of them new on Monday — and 4 people hospitalized with the virus.

The total since the pandemic first reached here in late March is 209 confirmed and 19 probable cases. Probables were identified through rapid testing.

While the infection rate remained at Orange Status levels this week, the positivity rate stayed in the Yellow to keep in-person instruction alive.

Thursday will be the last day for students to be in class until Dec. 7, apparently. Friday is already a planned virtual instruction day and classes are out next week for the buck season and Thanksgiving holiday.

Gov. Jim Justice has ordered schools to keep their doors closed through Thursday, Dec. 3, and with Hampshire schools in virtual mode on Fridays, students won’t be face to face with teachers again until Monday, Dec. 7.

The school closings weren’t Justice’s only orders to battle the pandemic this week.

He expanded the face mask order to require anyone age 9 or older to wear a face covering at all times inside all indoor public places. Previously, masks were not required indoors if social distancing could be maintained.

“In West Virginia, today, we have 339 people hospitalized. That’s an all-time record,” Justice said last Friday. “We have 104 patients in our ICUs. That’s another record. We’re up to 565 deaths.”

“We have got to realize what we’re dealing with here, it is a massive, massive killer.”

Hampshire County’s Health Department is continuing a program of free tests for residents from 9 a.m. to 1 p.m. each morning through Friday in the parking lot of Hampshire Memorial Hospital.

This is the 3rd week the daily testing has occurred and it was picking up in popularity Tuesday.

Pat Gottschalk, who lives near the hospital, said lines were snaking out of the parking lot.

“It’s one of these days that makes you think about what we’re going through,” she said.

A positive test for someone associated with the Springfield Rescue Squad led County Health Director Stephanie Shoemaker to order the entire squad to quarantine until Thursday.

Rescue Chief Donna Steward credited the county service and Romney Rescue Squad for stepping in to cover runs for Springfield.

The pandemic has thrown neighboring Mineral and Hardy counties into Red Status.

Mineral’s skyrocketing count includes an outbreak at a Keyser nursing home that had grown to 37 people by the weekend.

Buck season starts Monday in West Virginia and 2020 promises to be bigger and better than 2019.

The bigger part is the season being extended to 14 days, with 1 more Sunday added to the schedule.

The better? Well, the Division of Natural Resources says this year’s mast production — the worst in the 49-year history of the index — means more deer will be on the move and in the sights of hunters.

In addition, wildlife biologist Rich Rogers of the Romney DNR office, has this insight.

“The rut seems to be coming on a little late this year and it’s been slow up to this point,” he said. “There might be some rutting bucks next week, which will be interesting.

Hunters in Hampshire County nabbed 1,239 bucks in 2019. That total was easily in the bottom half of the 10-year trend.

“You can take a buck, doe and bear on the same day,” said Brett Skelly, DNR’s assistant deer project leader. “I don’t know of any other state that has anything like that.”

Rogers said bears are still on the prowl for the hunters who want to find one.

Hunters can also take a 2nd buck, provided they purchase the stamp for it by Sunday, the day before the season starts. Licenses and stamps are available to purchase at www.wvhunt.com.

• There’s no mandatory in-person checking during the 1st 2 days of the season any more.

• Carcasses can’t be removed from the containment area. Dumpsters are available here in Romney, Springfield and Capon Bridge. They’ll be in place until late December to help bow hunters and muzzleloaders too.

• Kills can be reported by calling 844-wvcheck or online at www.wvhunt.com.

Starting Monday, the Division of Natural Resources will have dumpsters for hunters who need to leave deer carcasses in the CWD containment are…

The North River meanders through woods stripped bare of their leaves as nature settles in for a long winter’s nap.

In the choice of what forecasts to believe, let’s ignore the Old Farmer’s Almanac this year.

The map in the annual publication has this neck of the woods under a label called “sheets of sleet.”

Instead, listen to Topper Shutt, chief meteorologist at WUSA, Channel 9, in Washington, D.C., or the folks at AccuWeather and the National Oceanic and Atmospheric Administration.

They’re all saying the winter here is likely to be warmer than normal and average in snowfall — all courtesy of a weak La Niña phenomenon, the 1st in 3 years.

The short tale is that the jet stream, which carries the winter weather across the continent, is more likely to stay to our north.

It’s not a perfect gauge. We were under a weak La Niña in 1996 and long-time residents will gladly talk about the blizzard that January.

But generally, La Niña is a good thing. It’s the name for conditions along the Equator in the central and eastern Pacific when the surface water temperatures are cooler and those to the west are warmer.

“This causes changes in the surface and upper wind patterns that drive air masses across the globe,” AccuWeather long-range expert Paul Pastelok said.

To our advantage here.

The phenomenon is called La Niña because it’s the counterpart to El Niño, or “the Christ child.” That phenomenon was so named because the warmer shift in temperatures occurs around Christmastime.

• WUSA says D.C. will see lower-than-normal snow totals, with average falls to the north and west (that’s us). They say Winchester will have 20 inches of snow this winter, as opposed to the recent average of 18 inches. Hampshire County won’t be far off that mark.

“This does not mean that we will not see some arctic outbreaks -- we will -- nor does it mean to book tee times all winter,” WUSA says. “We are simply forecasting temperatures slightly above the average for those 3 months.”

• AccuWeather says, “Not all La Niñas are created equal, and thus, there can be variations in weather patterns that develop.”

AccuWeather predicts warm air will be drawn up the East Coast into the mid-Atlantic and aim for areas east of the Appalachian Mountains, leading to below-normal snowfall along much of the Interstate-95 corridor.

In contrast, snowfalls tend to occur over a zone stretching across the Tennessee Valley, Ohio Valley and interior Northeast.

• Meteorologists at NOAA’s Climate Prediction Center said last month that La Niña has a 60-percent chance of lingering into spring.

More collisions happen with deer between October and December

We’re smack in the middle of deer-and-car-collision season in West Virginia — and the latest numbers say it’s worse than ever.

State Farm Insurance has released its annual study and says that for the 14th year in a row, West Virginia leads the nation in deer-vehicle collisions.

Alarmingly, 1 in 37 West Virginians has had a run-in with a deer in the last year, the insurer said, which is worse than a year ago, and that was considered the worst rate in recent memory.

The stats from State Farm dovetail with a reminder from the Division of Natural Resources about watching for deer.

DNR estimates that 40 percent of accidents happen in the last 3 months of the year, the period surrounding the deer rut.

“The rut seems to be coming on a little late this year,” Rich Rogers noted Monday. He’s the big game wildlife biologist for DNR’s Romney office.

The abundance of deer, coupled with the state’s rugged terrain, makes for, well, accidents waiting to happen.

Once that deer has been hit, the damage costs more to repair, State Farm’s claims data shows. The average cost last year was over $4,500, AAA reports.

DNR has a list of reasons for the high accident rate, starting with deer species characteristics.

“West Virginia is fortunate to have an abundance of white-tailed deer,” understated Tyler Evans, wildlife biologist with the DNR Wildlife Resources Section, in a press release last week. “However, this abundance can magnify the issue of deer-vehicle collisions when combined with the deer breeding season which takes place in the fall.”

Evans noted that West Virginia’s rugged terrain also likely contributes to the collisions. The best deer habitat and mast are often found in valleys and bottomlands, he said, which, of course, is where most of the state’s roads run.

The mating season, or rut, increases deer activity and movement in late October and November, raising the likelihood of deer-vehicle collisions.

“Additionally, many hunters will take to the woods this fall,” Evans said. “Their presence may also influence movement of deer and may increase the likelihood of a deer-vehicle collision.”

By the way, State Farm says the other states in the top 5 of most-likely-to-collide-with-a-deer are, in order, Montana, Pennsylvania, South Dakota and Michigan.

To reduce the likelihood of colliding with a deer, DNR and State Farm urge motorists to observe the following driving tips: 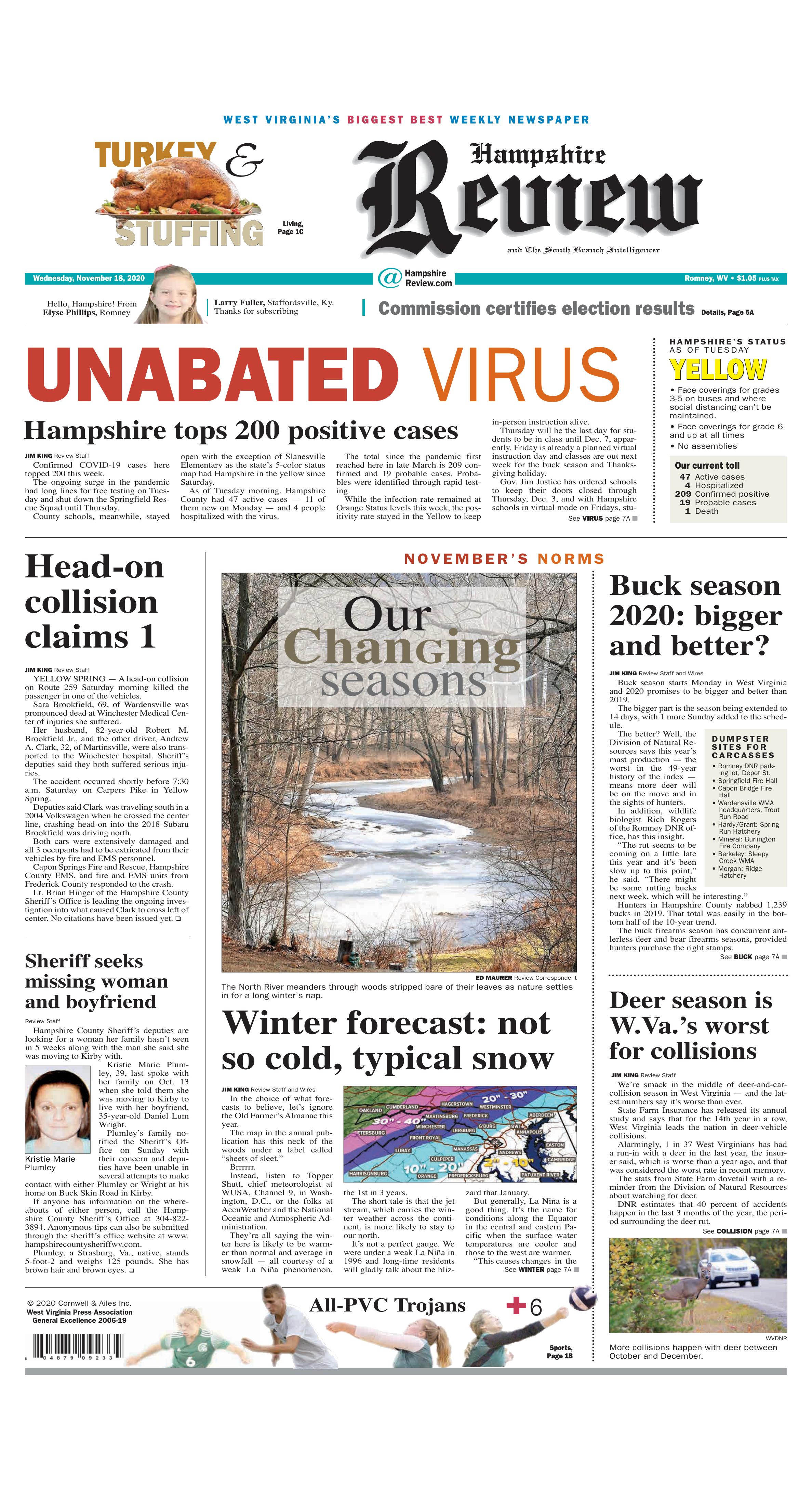