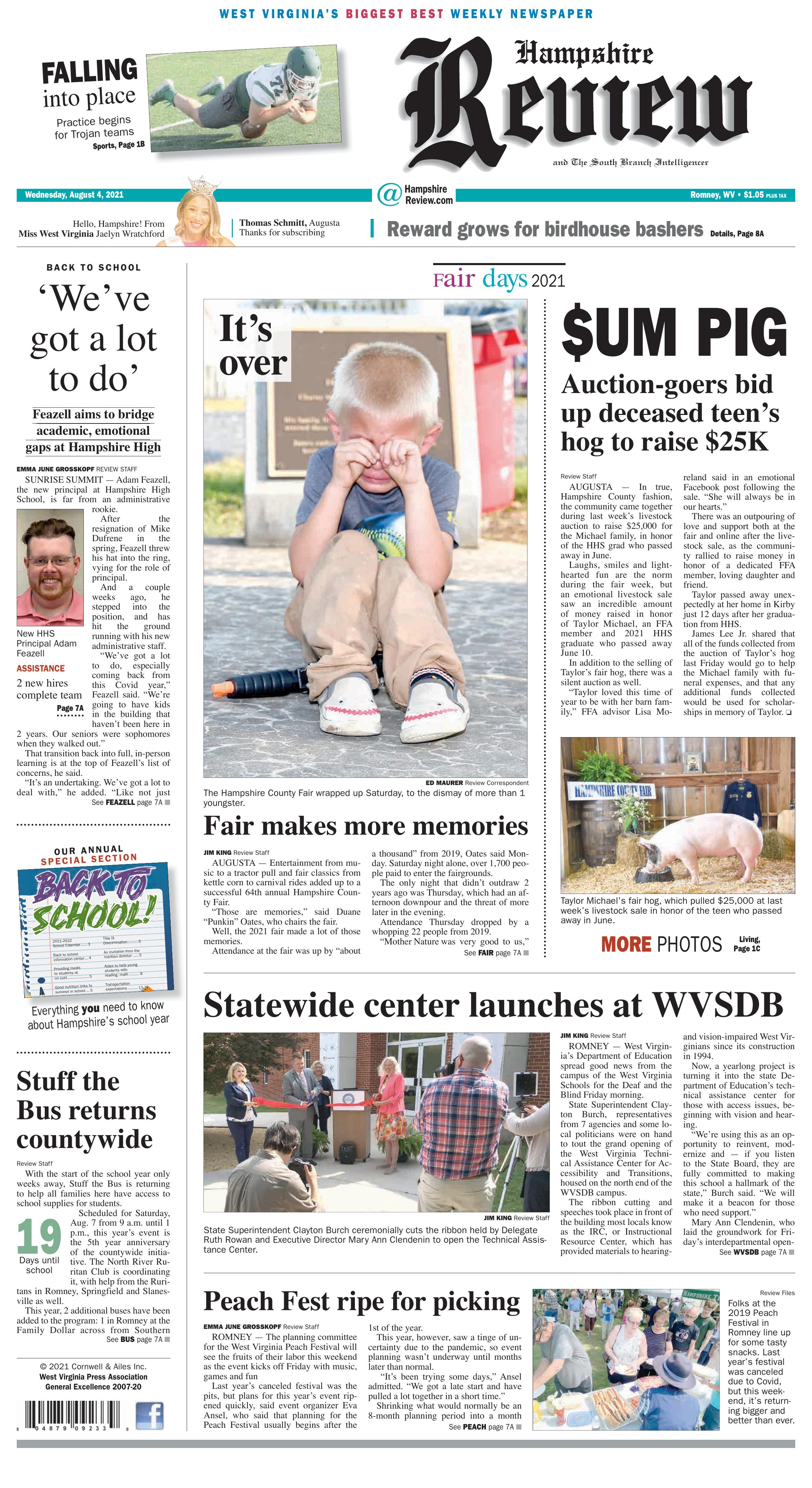 After the resignation of Mike Dufrene in the spring, Feazell threw his hat into the ring, vying for the role of principal.

And a couple weeks ago, he stepped into the position, and has hit the ground running with his new administrative staff.

“We’ve got a lot to do, especially coming back from this Covid year,” Feazell said. “We’re going to have kids in the building that haven’t been here in 2 years. Our seniors were sophomores when they walked out.”

That transition back into full, in-person learning is at the top of Feazell’s list of concerns, he said.

“It’s an undertaking. We’ve got a lot to deal with,” he added. “Like not just students’ academic needs, but social and emotional needs as well.”

The new man in charge is focused on bridging the gap between students who may have suffered with the constant shifting that occurred during last school year.

Virtual learning is hard, he noted, and last year, students didn’t really have a choice.

That’s his plan for the upcoming year: help the students who struggled that year to catch up, while also allowing students who thrived last year to keep growing. Feazell said that administration has been working with Potomac State to see what other kinds of classes they can offer for the upper-level HHS students.

When he was assistant principal, Feazell had a CTE focus, and he has a new person taking over that role: former Pro-Start teacher Julie Landis.

With Landis and the other new face on the administration, Christy Stump, Feazell said he’s “excited” to see what the new year brings.

With the Covid-sized cloud not quite passed yet, the school will still be doubling down on cleaning practices and making masks in classrooms voluntary, yet mandatory for those on the school bus.

The school will be working closely with the school board and the health department to maintain the safest route for students and staff, but right now, the 2021-22 school year is shaping up to be almost back to “normal.”

“I’m excited,” Feazell said about his new role. “There’s a big transition in front of us for everyone.”

To help with that transition, the high school will be holding its back-to-school open house on Thursday, Aug. 19 from 5 p.m. until 7 p.m.

From 5-6 p.m., the open house will focus on preparing the freshmen for their 1st year as Trojans, and the remainder of the evening will be focused on the rest of the HHS student body.

Feazell added that at the open house, students will receive their schedules as well as the opportunity to pick up schedule-change request forms, and if they’re accompanied by their parents, they can sign and submit the forms right there that night.

And don’t worry if you can’t make it to the open house: Feazell said the 1st day of school would allow for students to get acclimated with HHS and their administration, too.

Taylor Michael’s fair hog, which pulled $25,000 at last week’s livestock sale in honor of the teen who passed away in June.

AUGUSTA — In true, Hampshire County fashion, the community came together during last week’s livestock auction to raise $25,000 for the Michael family, in honor of the HHS grad who passed away in June.

Laughs, smiles and lighthearted fun are the norm during the fair week, but an emotional livestock sale saw an incredible amount of money raised in honor of Taylor Michael, an FFA member and 2021 HHS graduate who passed away June 10. In addition to the selling of Taylor’s fair hog, there was a silent auction as well.

“Taylor loved this time of year to be with her barn family,” FFA advisor Lisa Moreland said in an emotional Facebook post following the sale. “She will always be in our hearts.”

There was an outpouring of love and support both at the fair and online after the livestock sale, as the community rallied to raise money in honor of a dedicated FFA member, loving daughter and friend.

Taylor passed away unexpectedly at her home in Kirby just 12 days after her graduation from HHS.

James Lee Jr. shared that all of the funds collected from the auction of Taylor’s hog last Friday would go to help the Michael family with funeral expenses, and that any additional funds collected would be used for scholarships in memory of Taylor.

Fair Chairman Duane "Punkin" Oates watches the rides beside Gary Harbaugh, who owned the company providing the rides 35 years ago, when Oates first served as a fair chair.

AUGUSTA — Entertainment from music to a tractor pull and fair classics from kettle corn to carnival rides added up to a successful 64th annual Hampshire County Fair.

“Those are memories,” said Duane “Punkin” Oates, who chairs the fair.

Attendance at the fair was up by “about a thousand” from 2019, Oates said Monday. Saturday night alone, over 1,700 people paid to enter the fairgrounds.

The only night that didn’t outdraw 2 years ago was Thursday, which had an afternoon downpour and the threat of more later in the evening.

Attendance Thursday dropped by a whopping 22 people from 2019.

“Mother Nature was very good to us,” Oates said. “Nothing got rained out. The little bit of rain we did have really helped the fairgrounds.”

Oates was proud of the 1st-time additions to this year’s lineup — a Friday night truck and tractor pull, an ice cream specialty and kettle corn vendors on the midway.

“They really liked our fair,” Oates said of the ice cream vendors from Elkins. “They told me to pencil them in for next year.”

And, Oates said, the company supplying the carnival rides had its biggest week ever at the fair, even with a half-price night

The fair chairman heaped praise on the Boy Scouts who staff the ticket window and the Cub Scouts, who clean up the grounds each night.

With the start of the school year only weeks away, Stuff the Bus is returning to help all families here have access to school supplies for students.

Scheduled for Saturday, Aug. 7 from 9 a.m. until 1 p.m., this year’s event is the 5th year anniversary of the countywide initiative. The North River Ruritan Club is coordinating it, with help from the Ruritans in Romney, Springfield and Slanesville as well.

This year, 2 additional buses have been added to the program: 1 in Romney at the Family Dollar across from Southern States and 1 at the Springfield Dollar General.

School supplies can be donated at the following locations:

Capon Bridge, both the Family Dollar and Dollar General

For some families, it can be difficult to buy all of the necessary supplies needed for the classrooms, and the Stuff the Bus campaign ensures that the 1st day of school isn’t any more stressful than it already is – helping kids feel confident as they walk through the school doors.

ROMNEY — West Virginia’s Department of Education spread good news from the campus of the West Virginia Schools for the Deaf and the Blind Friday morning.

State Superintendent Clayton Burch, representatives from 7 agencies and some local politicians were on hand to tout the grand opening of the West Virginia Technical Assistance Center for Accessibility and Transitions, housed on the north end of the WVSDB campus.

The ribbon cutting and speeches took place in front of the building most locals know as the IRC, or Instructional Resource Center, which has provided materials to hearing- and vision-impaired West Virginians since its construction in 1994.

Now, a yearlong project is turning it into the state Department of Education’s technical assistance center for those with access issues, beginning with vision and hearing.

“We’re using this as an opportunity to reinvent, modernize and — if you listen to the State Board, they are fully committed to making this school a hallmark of the state,” Burch said. “We will make it a beacon for those who need support.”

Mary Ann Clendenin, who laid the groundwork for Friday’s interdepartmental opening, was named the center’s executive director Friday by Burch.

She will relocate from Charleston to Romney, as will Debbie Adams, the new state coordinator for deaf and blind education. She began her job a week ago.

Burch announced that he and a team of administrators from Charleston will spend a week a month in Romney over the next year to work with the new center and WVSDB as it goes through an intervention that was launched this spring after a 44-page special circumstances review found deficiencies in the state-run school from resident care to instruction to bookkeeping.

Delegate Ruth Rowan greeted Burch and the crowd of 60 or so who gathered at the IRC.

“I cannot express how excited I am to see the creation of expanded services for students with exceptionalities across the state,” she said.

“He has assembled a team that has created a plan for the school and the campus and has set solid achievable goals,” she said. “The West Virginia Schools for the Deaf and the Blind are building now a bright future and the town of Romney wants to be part of that future.”

Burch said other agencies are lining up to be part of the Technical Assistance center.

For now, 2 of the state’s adult basic education programs, DHHR and the state’s birth-to-3 operation will now be headquartered here, in addition to the IRC and WVSDB’s birth-to-5 outreach.

Tours of the facility followed the opening ceremony.

Folks at the 2019 Peach Festival in Romney line up for some tasty snacks. Last year’s festival was canceled due to Covid, but this weekend, it’s returning bigger and better than ever.

ROMNEY — The planning committee for the West Virginia Peach Festival will see the fruits of their labor this weekend as the event kicks off Friday with music, games and fun.

Last year’s canceled festival was the pits, but plans for this year’s event ripened quickly, said event organizer Eva Ansel, who said that planning for the Peach Festival usually begins after the 1st of the year.

This year, however, saw a tinge of uncertainty due to the pandemic, so event planning wasn’t underway until months later than normal.

“It’s been trying some days,” Ansel admitted. “We got a late start and have pulled a lot together in a short time.”

Shrinking what would normally be an 8-month planning period into a month and a half is a daunting task, but festival organizers are making sure this weekend’s festival turns out, well, peachy.

The festival will boast vendors with all kinds of peach fare, Ansel said, thanks to all of the peaches provided by Shanholtz’s Orchards.

“There will be a lot of good food and 3 days of entertainment free to the public,” she promised. “That always makes a big difference.”

The weekend-long festival will see an open mic, pageant and a Romney Rotary grill lunch on Friday to kick off, and a day chock-full of peach fun on Saturday: a magician’s performance, music by area bands, peach beer and wine tasting and a 5K race.

Sunday will see even more music, as well as a church service to round out the weekend.

On top of the music and peach fare, there will also be a parade down Birch Lane, organized by the Romney Fire Company. Ansel also expressed gratitude for their supporters in the community: Bank of Romney, FNB Bank, Summit Bank, Hardy Communications, S&S Electric, Lambert’s Drug Store, Keaton, Frazer and Milleson PLLC and, the Hampshire County Commission.

“We’ve gotten a tremendous amount of feedback,” Ansel said. “I think it’ll grow, and I believe it brings a lot of people into the county. It’s going to be a massive undertaking.” o