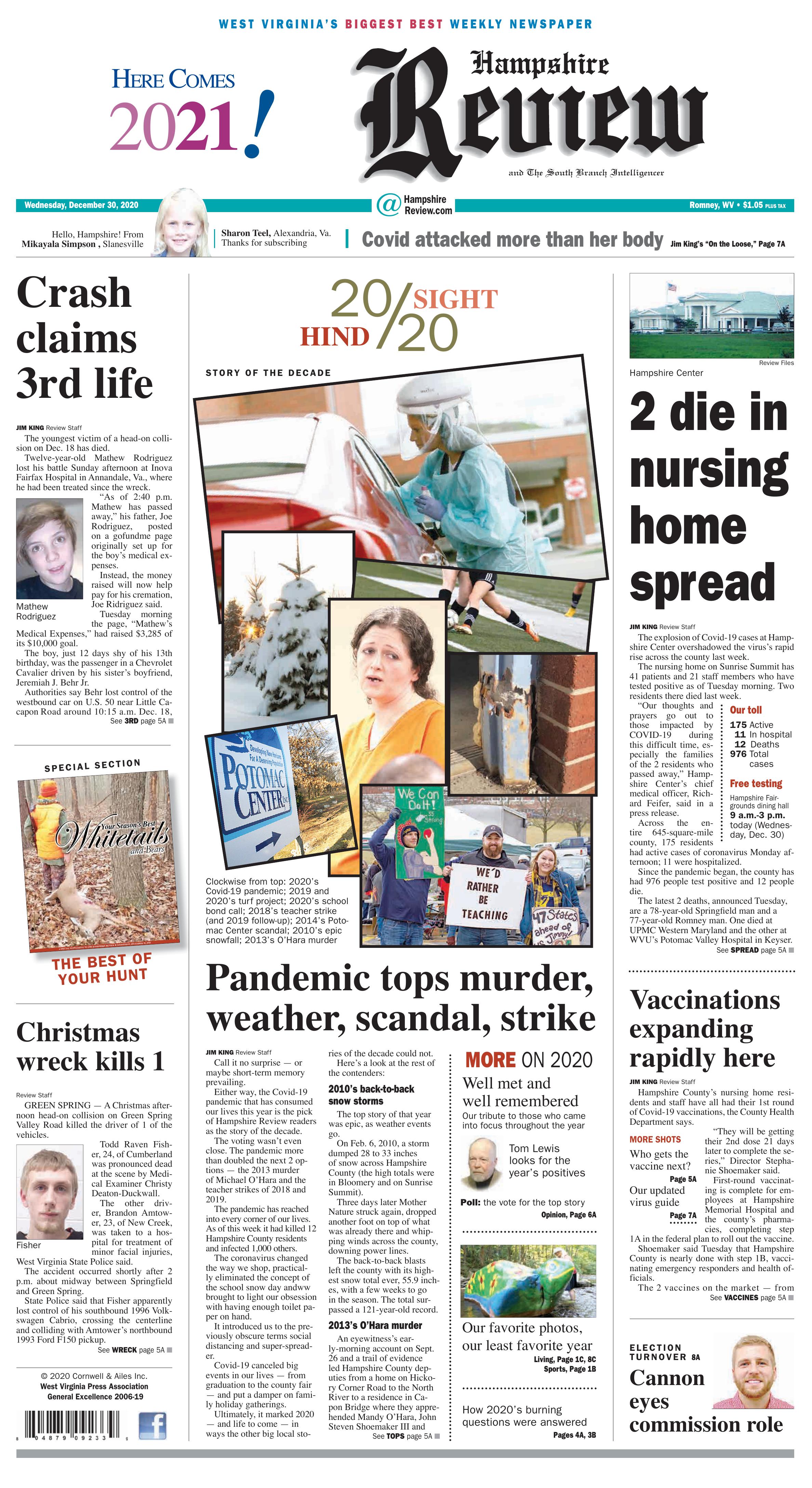 The youngest victim of a head-on collision on Dec. 18 has died.

Twelve-year-old Mathew Rodriguez lost his battle Sunday afternoon at Inova Fairfax Hospital in Annandale, Va., where he had been treated since the wreck.

“As of 2:40 p.m. Mathew has passed away,” his father, Joe Rodriguez, posted on a gofundme page originally set up for the boy’s medical expenses.

Instead, the money raised will now help pay for his cremation, Joe Ridriguez said.

The boy, just 12 days shy of his 13th birthday, was the passenger in a Chevrolet Cavalier driven by his sister’s boyfriend, Jeremiah J. Behr Jr.

Authorities say Behr lost control of the westbound car on U.S. 50 near Little Cacapon Road around 10:15 a.m. Dec. 18, colliding with a Ford Focus carrying James H. “Pete” Burkett and his wife of 64 years, Shirley. Both of the Burketts were pronounced dead at the scene.

“J.J. suffered pretty bad brain trauma and still doesn't remember the accident,” his mother, Jes Mendez Behr, said Monday. On doctors’ advice, he has not been given any details of what happened.

Physically, his condition is improving steadily.

“He took his first steps yesterday,” his mother reported. “His recovery is nothing short of a miracle from God himself.”

Mendez Behr said he will be transferred to a rehabilitation center in Winchester to continue his recovery.

“We have 65 pictures to prove otherwise,” she said Monday.

Call it no surprise — or maybe short-term memory prevailing.

Either way, the Covid-19 pandemic that has consumed our lives this year is the pick of Hampshire Review readers as the story of the decade.

The voting wasn’t even close. The pandemic more than doubled the next 2 options — the 2013 murder of Michael O’Hara and the teacher strikes of 2018 and 2019.

The pandemic has reached into every corner of our lives. As of this week it had killed 8 Hampshire County residents and infected 1,000 others.

The coronavirus changed the way we shop, practically eliminated the concept of the school snow day brought to light our obsession with having enough toilet paper on hand.

It introduced us to the previously obscure terms social distancing and super-spreader.

Covid-19 canceled big events in our lives — from graduation to the county fair — and put a damper on family holiday gatherings.

Ultimately, it marked 2020 — and life to come — in ways the other big local stories of the decade could not.

Here’s a look at the rest of the contenders:

The top story of that year was epic, as weather events go.

On Feb. 6, 2010, a storm dumped 28 to 33 inches of snow across Hampshire County (the high totals were in Bloomery and on Sunrise Summit).

Three days later Mother Nature struck again, dropped another foot on top of what was already there and whipping winds across the county, downing power lines.

The back-to-back blasts left the county with its highest snow total ever, 55.9 inches, with a few weeks to go in the season. The total surpassed a 121-year-old record.

An eyewitness’s early-morning account on Sept. 26 and a trail of evidence led Hampshire County deputies from a home on Hickory Corner Road to the North River to a residence in Capon Bridge where they apprehended Mandy O’Hara, John Steven Shoemaker III and Gabriella Clutter within 4 hours in the murder of Slanesville resident Michael O’Hara.

Mandy O’Hara, the deceased’s wife, was convicted of 1st-degree murder in 2015. She was sentenced to life in prison without possibility of parole – and then given consecutive sentences on 4 other charges. Shoemaker received 20 years for his role.

A routine investigation into possible abuse at the Potomac Center in January 2014 escalated into the removal of 24 children and revelation of multiple instances where low-level employees allegedly humiliated or bullied the developmentally disabled children who were in their care.

The state Department of Health and Human Resources allowed the campus to reopen later in the year and return to full use within a year.

Seven employees were eventually charged with counts of abuse and neglect and received varying sentences.

Gov. Jim Justice promised 5-percent raises for school staff before the 2018 Legislative session began. When it looked like lawmakers might not make good on the pledge, teachers and service personnel swung into action.

They walked out in late February and stayed off the job for 9 days, until the pay raises passed, along with a promise to overhaul the state’s health insurance plan.

That might have been the end of it, but a year later some Republican lawmakers introduced an “omnibus” education reform that infuriated local educators. Among its provisions: banning future job actions. Teachers walked out again until the plan was gutted.

The Bank of Romney stepped forward in mid-2019 with an offer to pay about $850,000 over the next 15 years to update the playing surface at Rannells Field with artificial turf and a rubberized track. The proposal hinged on matching funds being raised.

After weeks of negotiations to make sure taxpayers will not end up paying for the field, fundraising began in earnest, reaching its goal in early March of this year.

That allowed construction to begin on the field June 1, wrapping up in time for soccer and football teams to play and practice on it when the fall sports season began.

The track is projected to be completed by this spring.

The ask was epic and the vision historic.

Early in the year, the school board accepted the recommendations of a panel of residents and educators that called for Hampshire County to close 5 aging elementary schools and build 3 new ones over the next decade. In addition, a gym would be built at Capon Bridge Elementary and safety improvements made at Hampshire High.

The board asked voters for the money needed — $26 million to be paid over 10 years — but only after announcing that the state’s School Building Authority had pledged $24 million toward the project.

Then, of course, Covid-19 hit, shutting down schools and layering a crisis on top of the administration’s and board’s campaign.

But the need was demonstrated and voters dug deep in the delayed primary election. The bond call reached landslide territory, receiving a 60-percent “yes” vote.

The biggest school building project in Hampshire County will likely see the first earth moved in 2021.

GREEN SPRING — A Christmas afternoon head-on collision on Green Spring Valley Road killed the driver of one of the vehicles.

Todd Raven Fisher, 24, of Cumberland was pronounced dead at the scene by Medical Examiner Christy Deaton-Duckwall.

The other driver, Brandon Amtower, 23, of New Creek, was taken to a hospital for treatment of minor facial injuries, West Virginia State Police said.

The accident occurred shortly after 2 p.m. about midway between Springfield and Green Spring.

Cpl. M.T. Sherman and Trooper J.L. Wolfe from the State Police’s Romney detachment responded to the accident along with Trooper C.S. Barrett of the Keyser office, and the Springfield, Romney and Fort Ashby fire and rescue units, Hampshire County ambulance and Iser’s Towing.

Hampshire County’s nursing home residents and staff have all had their 1st round of Covid-19 vaccinations, the County Health Department says.

“They will be getting their 2nd dose 21 days later to complete the series,” Director Stephanie Shoemaker said.

First-round vaccinating is complete for employees at Hampshire Memorial Hospital and the county’s pharmacies, completing step 1A in the federal plan to roll out the vaccine.

The 2 vaccines on the market — from Pfizer and Moderna — both require 2 doses to be complete. Pfizer’s vaccine must be stored at super-cold temperatures, but Moderna’s can survive at normal freezer temperatures.

The bulk of the vaccines coming into Hampshire County — and, indeed, all of West Virginia — are from Moderna.

Vaccines are rolling in. On Monday, Gov. Jim Justice said West Virginia is leading the nation in rolling out the vaccines.

“At least the vaccine is in the county and about ready to go for the next group of people,” Shoemaker said.

Step 1C in the rollout includes the rest of the healthcare community, from hospital staff to private doctors to home health and hospice workers to chiropractors and counselors.

After step 1C, the vaccine is next supposed to go to school staffs, colleges and employees to ensure continuity of government.

Phase 2 begins with America’s oldest population and those with other medical conditions.

Phase 1A: Most hospital workers, residents and staffers at nursing homes, pharmacy workers

The explosion of Covid-19 cases at Hampshire Center overshadowed the virus’s rapid rise across the county last week.

The nursing home on Sunrise Summit has 41 patients and 21 staff members who have tested positive as of Tuesday morning. Two residents there died last week.

“Our thoughts and prayers go out to those impacted by COVID-19 during this difficult time, especially the families of the two residents who passed away,” Hampshire Center’s chief medical officer, Richard Feifer, said in a press release.

Across the entire 645-square-mile county, 175 residents had active cases of coronavirus Monday afternoon; 11 were hospitalized.

Since the pandemic began, the county has had 976 people test positive and 12 people die.

The latest 2 deaths, announced Tuesday, are a 78-year-old Springfield man and a 77-year-old Romney man. One died at UPMC Western Maryland and the other at WVU’s Potomac Valley Hospital in Keyser.

On Dec. 1, the County Health Department first reported a single employee at the center, owned by Genesis HealthCare, tested positive for the virus. That grew to 3 employees and an “ancillary” staffer 2 days later.

By Dec. 16, the center was reporting 13 of its 50 or so residents and 5 staffers with the highly contagious disease.

The deaths announced Saturday at Hampshire Center were 2 male residents, a 94-year-old and an 80-year-old. The department does not provide more identity information to protect patient privacy.

Feifer said the center has been “stringent” with CDC and state guidelines to combat the pandemic.

Among the actions the facility has taken, he listed, are screening residents 3 times a day for symptoms and restricting visits.

Staff temperatures are checked when employees arrive and all are required to wear personal protective equipment.

Feifer called vaccination “the critical third leg of the stool,” along with personal protective equipment and testing, to stem Covid’s spread in nursing homes.

County Health Director Stephanie Shoemaker said that the 1st round of vaccinations had been completed at Hampshire Center. The 2nd round comes up in about 3 weeks.