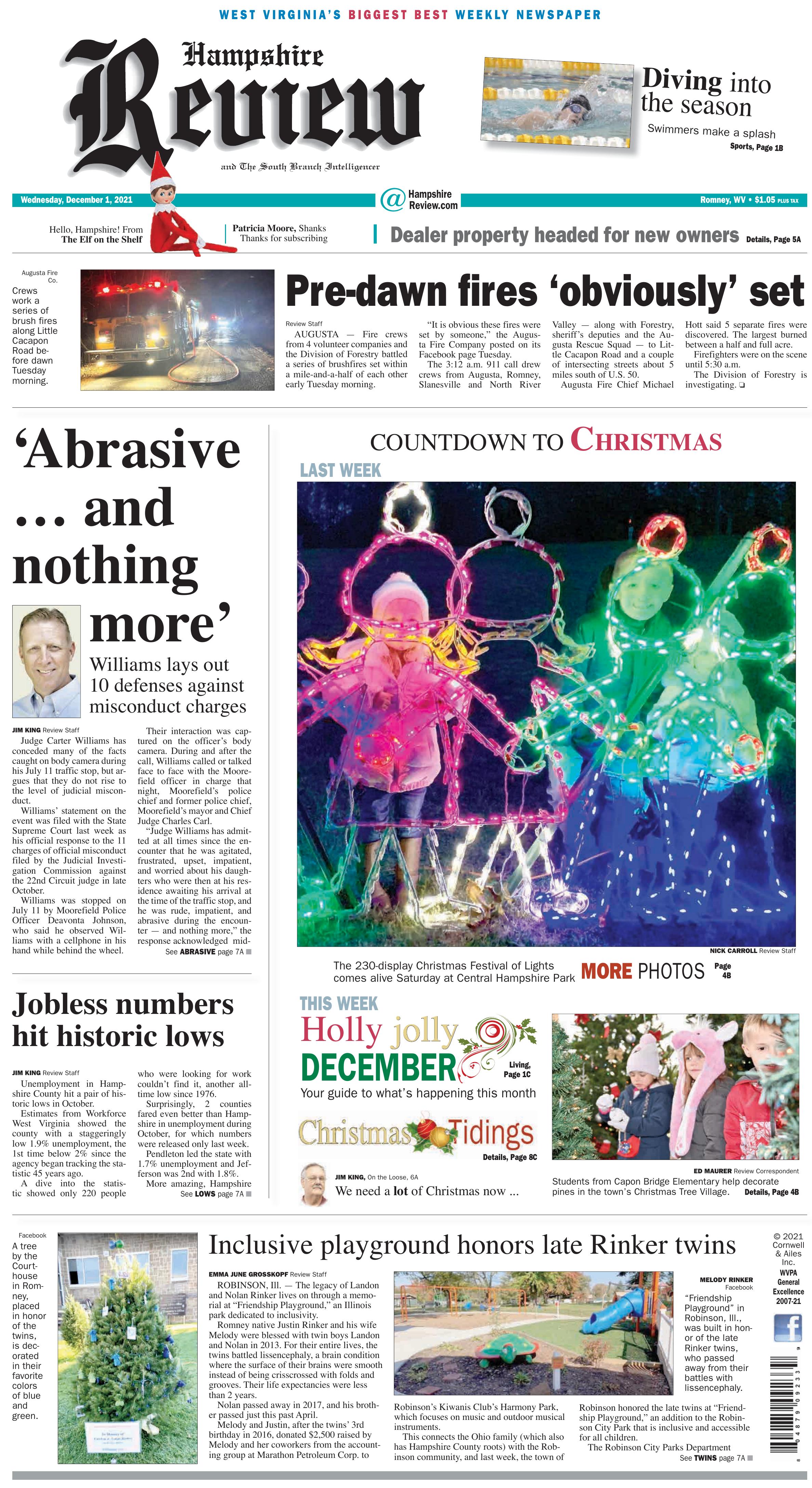 A tree by the Courthouse in Romney, placed in honor of the twins, is decorated in their favorite colors of blue and green.

The memorial and bench dedicated to the late Rinker twins, who passed away from their battles with lissencephaly.

ROBINSON, ILL. — The legacy of Landon and Nolan Rinker lives on through a memorial at “Friendship Playground,” an Illinois park dedicated to inclusivity.

Romney native Justin Rinker and his wife Melody were blessed with twin boys Landon and Nolan in 2013. For their entire lives, the twins battled lissencephaly, a brain condition where the surface of their brains were smooth instead of being crisscrossed with folds and grooves. Their life expectancies were less than 2 years.

Nolan passed away in 2017, and his brother passed just this past April.

Melody and Justin, after the twins’ 3rd birthday in 2016, donated $2,500 raised by Melody and her coworkers from the accounting group at Marathon Petroleum Corp. to Robinson’s Kiwanis Club’s Harmony Park, which focuses on music and outdoor musical instruments.

This connects the Ohio family (which also has Hampshire County roots) with the Robinson community, and last week, the town of Robinson honored the late twins at “Friendship Playground,” an addition to the Robinson City Park that is inclusive and accessible for all children.

Friendship Playground is an all-inclusive outdoor area built to provide activities for everyone, regardless of their abilities.

“What an honor for our family, and what a great facility and resting spot for local families and kids of all ages and abilities,” Melody said about the inclusive play area.

The goal of Friendship Playground is to allow all children, regardless of their abilities, to be a part of a community and give them a sense of belonging.

“(The fixtures) are designed to provide a safe place where children of all abilities can play together, and are developmentally appropriate for children with or without disabilities,” reads the descriptive sign outside the play area. “Cross-generational play is imperative to building strong families.”

The bench in memory of Landon and Nolan reads, “Superhero Friends,” and the memorial has photos of both boys along with their birth and death dates.

“Thank you to kind people everywhere who see a need, have an idea, care about someone else’s hurdles, whatever the case may be, and do your best to make the world better for others,” Melody said. “I am thankful for that spirit in you always.”

She called the bench and the memorial a “heart-warming surprise,” and she called Robinson a town that is “near and dear” to her family’s hearts.

The Rinker family currently resides in Van Buren, Ohio, but the family has Hampshire County connections as well: Landon and Nolan’s grandparents are Steve and Dee Dee Rinker, who both live in Purgitsville, and their great-grandparents are Gary and Kaye Strawn of Romney and Buck and Sudie Rinker.

Unemployment in Hampshire County hit a pair of historic lows in October.

Estimates from Workforce West Virginia showed the county with a staggeringly low 1.9% unemployment, the 1st time below 2% since the agency began tracking the statistic 45 years ago.

A dive into the statistic showed only 220 people who were looking for work couldn’t find it, another all-time low since 1976.

Surprisingly, 2 counties fared even better than Hampshire in unemployment during October, for which numbers were released only last week.

Pendleton led the state with 1.7% unemployment and Jefferson was 2nd with 1.8%.

More amazingly, Hampshire County appears to be bucking the trend of people leaving the workforce.

Workforce said the county had 11,560 people in the labor pool in October, a dip from September’s record 11,590, but still the 2nd-best on record. Hampshire County has had more than 11,000 people either working or hunting for work for 8 straight months —all-time highs in the county of 23,090 people.

Raw employment numbers were at all-time highs too; 11,350 county residents were working in October, the 5th month in a row over 11,000.

While 11,560 county residents are in the labor pool, the great majority of them work outside the county, principally in Virginia. Workforce showed just 3,820 nonfarm jobs in Hampshire County in October. About 37% of those in-county jobs are in government, including schools, municipalities, the county, state and federal level.

Unemployment in Hampshire County doubled at the outset of the Covid-19 pandemic in spring 2020, rising from 4.3% in March to 9.2% in April, before slowly drifting down to October’s historic lows.

Eleven years ago, in February 2010 when the county’s population was slightly larger than now, Hampshire had an unemployment rate of 9.8%. Workforce estimated 1,100 people out of 9,850 looking for work couldn’t find it.

The state’s adjusted unemployment rate in October was 4.3%, on par with the national average.

News
‘Abrasive … and nothing more’

Judge Carter Williams has conceded many of the facts caught on body camera during his July 11 traffic stop, but argues that they do not rise to the level of judicial misconduct.

Williams’ statement on the event was filed with the State Supreme Court last week as his official response to the 11 charges of official misconduct filed by the Judicial Investigation Commission against the 22nd Circuit judge in late October.

Williams was stopped on July 11 by Moorefield Police Officer Deavonta Johnson, who said he observed Williams with a cellphone in his hand while behind the wheel.

Their interaction was captured on the officer’s body camera. During and after the call, Williams called or talked face to face with the Moorefield officer in charge that night, Moorefield’s police chief and former police chief, Moorefield’s mayor and Chief Judge Charles Carl.

“Judge Williams has admitted at all times since the encounter that he was agitated, frustrated, upset, impatient, and worried about his daughters who were then at his residence awaiting his arrival at the time of the traffic stop, and he was rude, impatient, and abrasive during the encounter — and nothing more,” the response acknowledged midway through.

But, Williams argues in his 1st of 10 defenses, his actions were not abuse of his office. Instead, he said the follow-up conversations were “all in an attempt to simply explain that he was not using his cellphone in violation of (state) statute.”

His other 9 defenses contend, in order:

• He was not using the cellphone when stopped;

• He had rights as a citizen to “challenge and communicate his objections in a non-obstructive way” to the officer, rights that had nothing to do with his judicial office;

• West Virginia’s code of judicial conduct is “inferior” to the rights he exerted that night;

• He willingly gave up hearing cases involving Moorefield police and reported himself to the Judicial Disciplinary Counsel 5 days later;

• He fully cooperated with the Judicial Investigation Commission’s inquiry;

• His words “did not demonstrate any animus or discriminatory or racial belief, intent, or state of mind, whatsoever” and that charges of racial bias are “scandalous and burdensome;”

• He has no prior disciplinary history;

• He adhered to the code of conduct at all times; and

• If he did violate the rules of conduct, “there are personal and clinical, medical and mental health issues, facts, and circumstances, established by credible evidence, then existing, which explain and serve as mitigation for his conduct.”

The 14-page document then goes on to respond to the charges paragraph by paragraph. The response, filled by attorney Mike Benninger of Morgantown, uses the word “admits” 14 times and the phrase “generally admits” 8 more.

But Williams denied 10 of the 11 charges’ main statements of assertion.

His case goes before the Judicial Hearing Board at 9:30 a.m. Feb. 23 at Martinsburg’s Berkeley County Judicial Center.

He technically admitted to the 11th charge — that the Judicial Investigation Commission found “probable cause to believe” that Williams engaged in a pattern and practice of using his public office for private gain and violating state traffic laws.

But, Benninger explained Tuesday morning, Williams was only acknowledging the obvious.

“We are admitting that the commission made that finding, not that the finding is correct,” he said.

Charge 11 claims that Williams continued to drive his car after being notified his license had expired. It also cites 3 different traffic stops in Hardy County between April and June.

Williams could be suspended without pay and even lose his law license.

Hearing the case will be a 9-member board that consists of 3 circuit judges, a senior status judge, a family court judge, a magistrate and 3 public members, all appointed by the State Supreme Court.

The Judicial Hearing Board, the Judicial Investigation Commission and the Office of Disciplinary Counsel, which will present the case against Williams on Feb. 23, are separate parts of the State Supreme Court’s oversight of judicial and legal affairs in West Virginia.

The hearing board will decide findings of fact and interpret the law, but at the end of the day it can only make recommendations to the State Supreme Court on disciplinary action if it upholds any of the charges.

AUGUSTA — Fire crews from 4 volunteer companies and the Division of Forestry battled a series of brushfires set within a mile-and-a-half of each other early Tuesday morning.

“It is obvious these fires were set by someone,” the Augusta Fire Company posted on its Facebook page Tuesday.

The 3:12 a.m. 911 call drew crews from Augusta, Romney, Slanesville and North River Valley — along with Forestry, sheriff’s deputies and the Augusta Rescue Squad — to Little Cacapon Road and a couple of intersecting streets about 5 miles south of U.S. 50.

Augusta Fire Chief Michael Hott said 5 separate fires were discovered. The largest burned between a half and full acre.

Firefighters were on the scene until 5:30 a.m.

The Division of Forestry is investigating.